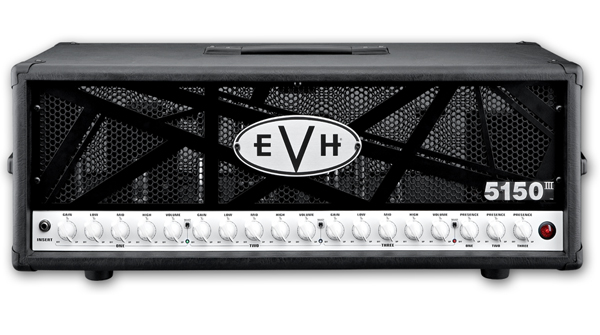 Eddie Van Halen has long been renowned for his exquisite Rock tone. From the early days of Van Halen 1, with his hot-rodded Marshalls running with a Variac, to his more modern Soldano tones on F.U.C.K, to the development of the signature Peavey 5150 100 Watt head, he has been restless in pursuit of perfect tone. To many Eddie followers, the original "block logo" 5150 was the best sounding amp, with its stripped down features, and is now hailed as a collectable modern classic. But fast-forward more than 20 years and an alliance between Fender and Eddie has resulted in the launch of an entire musical instrument brand - EVH. Under that umbrella are various versions of Eddie's new Wolfgang guitar (as reviewed in this issue), his "Frankenstein" guitar, as well as 50 Watt and 100 Watt versions of the new 5150 head. We borrowed the meatier of the two amps for this review.

Compared to previous version of the 5150, this head is packed with features We were sent a stunning ivory-coloured 100 Watt version (you can have black as an option), which features three channels, eight 12AX7 preamp tubes and four 6L6 power amp tubes. The amp head is pretty big in size - nearly 30" across from left to right, and pretty weighty too. That said, the design team at EVH Gear have thought of everything because as well as having the regular handle on the top of the head, the amp also features handles on both ends of the head, enabling it to be carried with both hands - genius! The front of the amp features a black powder coated grill, for both cosmetic reasons, exposing the valves, and also, importantly, for cooling. Additionally, the grill is decorated with black metal EVH stripe motif, a really stunning tie-in to Eddie's trademark stripes, subtle, yet stylish. The controls of the amp feature the very nice and retro 'chicken head' knobs.

One of the first things you notice on the control panel is that the power and standby switches are located on the rear of the amplifier, freeing up space on the front. The power light features a red jewel for bright power On indication on a dark stage. The three channels included are Clean, Crunch and Lead, but are labelled One, Two and Three. Each channel includes gain, low, mid, high and volume, enabling independent EQ, as well as crunch and volume control of each channel. The amp doesn't feature an overall master volume, though, which is quite surprising as it is good to be able to balance the level of each channel and then control that globally depending on the situation. Not having a master volume would mean that each channel would have to be rebalanced. But then this is Eddie's signature amp, and like all signature equipment it's artist specific - and who am I to argue with Eddie's choices? The amp does include three independent presence controls, however, which enable you to tailor the top-end frequencies of the power amp. As already mentioned the rear of the amp houses the power and standby switches, as well as the effects loop and speaker outputs.

Having got the details out of the way, I need to say, as we always do, watch the video to get an idea of how this mighty amp really sounds. Suffice it to say that the clean tone was full and rich, and the EQ controls were very usable and effective, allowing me to dial in a variety of tones. Another great application was that by pushing the gain control I was able to "crunch up" the clean channel, for some old school '60s/'70s style crunch; quite old Marshall-like.

Moving onto channel two, things start to get a little hotter, as you might expect! This is the Crunch channel, but to be honest it produces enough gain to be a Lead channel. Once again, the EQ controls operate very effectively, enabling vintage/modern Rock tones, to Blues and scooped hard Rock sounds. Now we kick in channel three, and here we are able to get some very high levels of gain and saturation! Once again, the very well tuned EQ controls enabled me to get a wide variety of tones, as you can hear. Personally, I enjoyed the mid-range control, as it is tuned and voiced in such a way that achieves the Eddie "Brown Sound" perfectly. Eddie's sound uses a surprising amount of mid-range, and that band on this amp is very sweet. Another great thing about the amp is how well it cleans-up when the guitar volume is backed off; a technique used by Eddie to achieve cleaner tones.

So what did we think of it? It is undoubtedly a very well built and great sounding amp that is capable of producing a wide variety of modern and vintage, clean, crunch and saturated tones. The styling is classy, yet captures the feel of something worthy of the EVH tag. My only serious question mark is the lack of master volume control, which strikes me as odd. Maybe, too, it could have done with a deep or resonance control. Then again, this is Eddie's choice, and when you buy into signature gear you are buying into the ideas and preferences of the player whose signature is on the front of the piece of gear. That's something you need to bear in mind when you consider buying any signature product.

All in all this is great amplifier. True, it is at the upper end of the price scale, but if you compare it with other professional class 100 Watt valve/tube heads it's far from the most expensive and in fact sells below the price of some of the fashionable boutique equivalents around today. In fact, I'd go so far as to say it would be well worth checking out if you are in the market place for a new amplifier, even if you aren't a devoted Eddie fan.