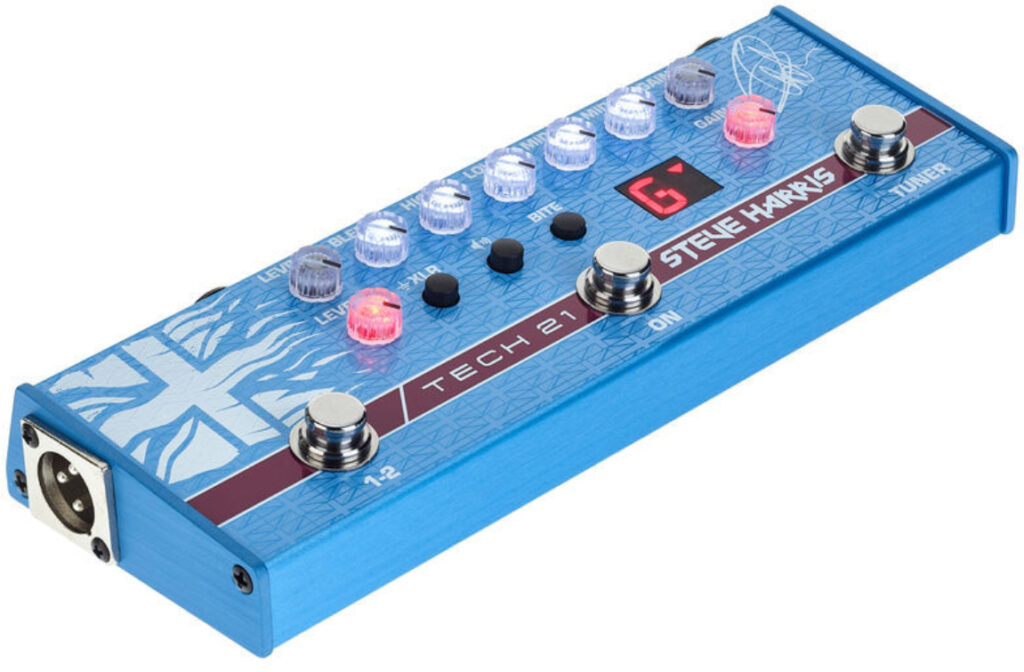 The Steve Harris SH1 features all-analog SansAmp technology, two-channel modes with individual Gain and Level controls, Blend, 4-band active EQ, and a Bite switch to activate a “Steve” boost for extra clank and clarity. Other features include a chromatic tuner and an XLR Output to go direct to the PA desk or studio board. Here's Dan Veall with the full breakdown.

When it comes to classic bands known the world over, do I really need to introduce the bassist of truly one of England’s rock royalty? Pounding out countless tracks that have stood the test of time since their forming in the mid-seventies by the man in question, one Steve Harris.

Steve Harris’ bass tone has been forever present in every single Iron Maiden release and is surely testament to the very iconic tone we are looking at today, more or less unchanged since the beginning, but in a good way. Unwavering, bold, and in your face.

Steve’s playing technique featuring melodic baselines, chords and at times relentless galloping is based on a two finger right hand technique (index and ring) and he uses his nails to get a brighter tone.

His signal path on stage and studio has been a fairly simple set up in comparison to that of other touring artists. Bass, wireless, preamplifier, compression, power amplifiers and then in to front loaded cabinets that feature ElectroVoice EVM12L speakers that are not known for their super deep low end actually. Steve has mentioned that he doesn’t want to hear low end sub-frequencies on stage anyway and would rather blend in with the guitars for a brutal tone onslaught - and it works!

Steve’s main Fender Precision bass is a mid-70’s model with a Seymour Duncan SPB-4 Steve Harris signature pickup, and he uses his signature Rotosound SH77 flat wound strings. We are using my own ’76 precision bass strung up with Rotosound’s new Ultramag string set for this review, though I am choosing to demonstrate “non-Steve” tones as well to show what else this pedal can do.

So, what is it we are looking at today? It’s an emulation, a distilled signal path in a pedal. Steve himself has said quite openly how pleased he is with how close it sounds to what he has been used to for so many years.

The pedal offers up a two-channel approach allowing for gain or level boosts as you’ll see in my video. There’s a pair of each control, and the settings are foot-switchable.

Next, a four-band equaliser is an interesting one, and I immediately smiled when I saw the chosen EQ centres—specifically having two mid-range controls that have low-mid centres rather than going for the usual low-mid / high-mid adjustments. Everyone knows that a good precision bass has lots ‘going on in the midrange’, so having these selected centres compliments perfectly.

The “bite” button is the magic though and adds all of that top-end zing and clank shaping we have been hearing on Iron Maiden’s releases for nigh on four decades..and the speaker emulation switch engages an EVM12L tone that Steve has had in his backline for, I guess the same amount of time!

Dialling your clean sound is a breeze with the blend knob, though in my video I concentrated on the tonal colour of the pedal itself.

In my video, I endeavoured to dial in a few different sounds that I hope come across in the mix to show that this pedal can do some brilliant ‘classic’ amp sounds as well as the signature colour, making it so useful - let’s not forget you get a tuner thrown in too and a DI output (with ground lift) for running the pedal alone straight to PA or recording device. How easy can this get? It’s really rather good.

At this price point it is good to see the inclusion (and I expect no less) of a worldwide power supply included. Tech 21’s packaging is a tasteful embossed tin with the Tech 21 logo. A small gesture but something that makes this brand stand out in the boutique market.

This is a modern pedal designed to emulate Steve’s classic bass tone. It’s not just about that one tone as the pedal is incredibly flexible, but even in Steve’s own words it nails what he wants from his sound in one small package. Yes, this is a boutique priced item, but it is built for the road (it’s in Steve’s set up) but will form the centre of any recording rig easily. It’s a great unit.