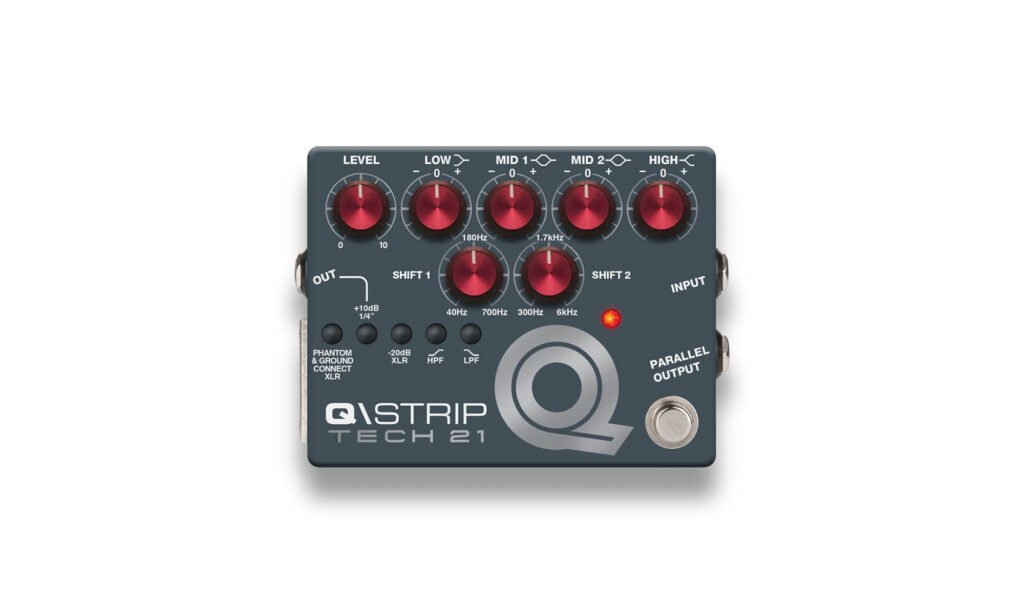 Q/Strip isn’t just an EQ pedal. It’s a DI, a volume boost pedal, a speaker emulator, a classic equaliser strip, a ‘second amplifier channel’, a recording pre-amplifier and probably a whole host more of options I’m yet to think of.

Minor point about the HPF for bass players

Tech 21 is arguably best known for the SansAmp ‘Amp In A Box’ simulator—However, their quality product range has been rapidly expanding over the years, including effects and utility pedals. Today we have something else a little different; A recording console channel strip in a box! Dan Veall takes a look at the Q/Strip.

Ok, so there’s a limit to what you can squeeze in to a box this small, but Tech 21 have managed to cram in a semi-parametric equaliser and additional useful functions that make this box of tricks suitable for a whole host of solutions, not just what might seem obvious. You could be looking to expand on the limited equaliser controls on your amplifier, need a full on preamplifier to drive a slave power amplifier or are looking for a set and forget tone machine for recording.

Let's get straight in to it. Top left-hand corner there is a master level control for when the pedal is engaged by using the foot switch on the opposite corner. Flanking the midrange controls in the middle are two shelving active equaliser controls for the lows and highs. These alone have a fairly hefty effect on tone with 18dB of cut and boost.

In between the Low and High labelled knobs is where my interest lies with this pedal most. I am fussy when it comes to semi-parametric equalisers and have found many have fallen just short of the useful frequencies I would like to access. Indeed, being not ‘fully parametric, (missing the all important ‘width’ parameter adjustment) can sometimes be limiting for some.  Q/Strip I think is on the money here though given the available space for electronics. There’s a Low Mid adjustment that starts at where the bass control finishes and sweeps up to the upper mid range at 700hz. Often I have found that the sweet spot I want to boost is around 110Hz for that kick drum punch - and quite a few equalisers don’t centre around this frequency. No problem here! Midrange knob 2 overlaps mid-range 1 and starts at 300hz to sweep all the way up into that biting pick attack territory of 6khz. Again both controls offer up a huge 18dB of boost and cut.

Using these controls sparingly as I did in the video rewarded me with just the sound I was looking for. Watch how I zoned in on the frequencies I wanted to hear to accentuate the tone of my bass in the studio.

Underneath the equaliser are some ‘fast access’ switches. A high pass filter (HPF) that will help to cut down on rumble for microphone users and maybe sub ‘boom’ from excessive EQ elsewhere in the chain. The roll off is gentle and actually, as a bassist, I would have preferred to have seen a 24db per octave roll off at say 25hz which is a great way to alleviate speaker flapping and really tightening up the sound of any bass, even extended range instruments.

The low pass filter (LPF) is going to be useful for guitarists but also bassists who like using ‘gainy’ distortion. We often have problems when it comes to cabinets with tweeters in, or sending the sound of our pedals directly to the PA. Being able to emulate the sound of a paper cone speaker really smooths out the top end of heavy distortion. This button will go a certain distance to making that a tap of a foot rather than reaching for tweeter attenuator knobs on darkened stages to tame excessive top end fizz!

The last three buttons are for the two separate outputs: You may wish to use this pedal instead of in front of your amplifier’s input on the front but rather directly into a slave amplifier. The +10db button will ensure that you can drive such a unit correctly with a strong enough signal. On board, the Q/Strip has an XLR ‘balanced direct injection’ output and the next button offers the option of changing the output gain should it need to be attenuated. Finally, again for the XLR output, a ground lift switch but also to allow phantom power connectivity, which means a mixing console will be able to power your pedal rather than an internal 9v battery or additional ‘wall wart’ supply. A convenient option to include.

Rounding up, connections include of course the input jack and next to that a parallel output that is hard wired directly to the input socket. You can send the sound of your instrument, unaffected to other devices using this socket.

Q/Strip isn’t just an EQ pedal. It’s a DI, a volume boost pedal, a speaker emulator, a classic equaliser strip, a ‘second amplifier channel’, a recording preamplifier and probably a whole host more of options I’m yet to think of.

I’m also trying to think of additions I’d like to see on Q/Strip. The 24db/Oct filter would be handy, but other than that, I believe that we have a near perfect equaliser pedal here. 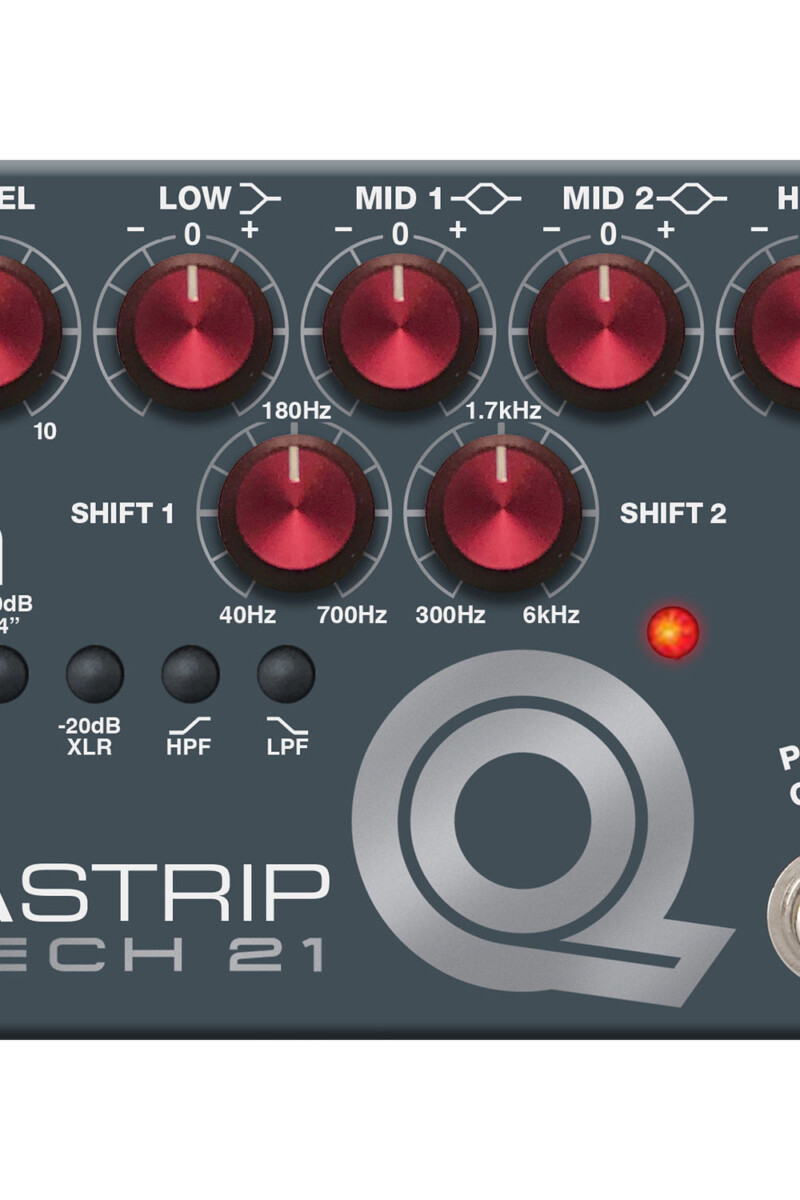