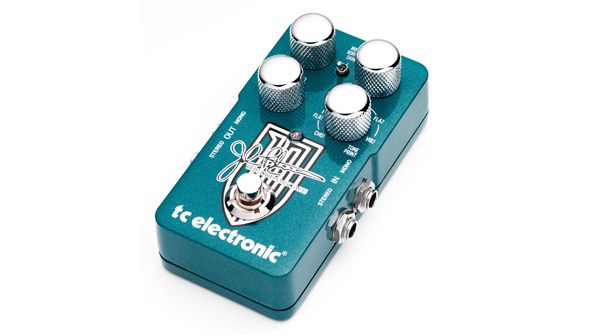 TC Electronics is one of the most highly regarded manufacturers of guitar effects and pro audio equipment in the world. Put that illustrious Danish company together with John Petrucci, hailed as one of the best guitarists in the world, and you have what should be an unbeatable combination! As a huge Petrucci fan, and also a TC user myself, I was keen to get my hands on this pedal and put it through its paces (he was a bit more than 'keen' - Ed!).

There are certain things you can always take for granted from a TC product. Build quality is one (and this pedal is absolutely no exception) and the second that it will be right at the forefront of current technology - and that's true here, too. The Dreamscape is one of TC's much applauded TonePrint pedals, which allow the user to download TonePrints created by artists, simply by connecting your pedal to a computer and grabbing the TonePrint you want from TC's website. It is also updatable with any Corona Chorus TonePrint.

Petrucci was apparently one of the first artists to come onboard the TonePrint project and the drive behind the Dreamscape was that he wanted to gather his TonePrints into a single pedal - even though his original TonePrints are for three different pedals in the series. The result is that the Dreamscape has three modulation effects built-in and Petrucci has created a brand new TonePrint for Vortex Flanger, taking the total amount of custom-tweaked tones up to six - two chorus, two flanger and two vibrato.

The pedal is housed in a sturdy metal case; with a high quality silent stomp switch. It has four rotary controls, one that clicks to the chosen effect - you have a range of six onboard tones plus one TonePrint to choose from - while the others that let you dial in and alter the tone. These are labelled Effect Level, which allows you to dial in the amount of effect required, Speed, which controls how fast the modulation is, and Depth which alters the intensity of the effect. There is also a little switch that changes the EQ of the effect, with three settings: Bright, Normal and Dark. The effect can be connected either in-line or via the effects loop, and auto-senses the different input levels.

When I tested the pedal I was running it inline into the front of the amp. The pedal produced beautiful sounding effects, from shimmering chorus, to a more intense thick chorus that worked fabulously with both clean and crunch tones. The EQ switch was very useful when using the pedal with crunch, the vibrato setting was very inspiring, and I have to say I could really hear this effect on Dream Theater tracks - it was very inspiring to play with. The flanger effect, meanwhile, created some classic tones, and with the depth control turned up delivered a real Van Halen tone, which John even stated as his inspiration for the tone.

To conclude this is a very versatile pedal. Not only does it feature six effects tones in one compact pedal, it also has the revolutionary TonePrint technology on board, not to mention switchable True and Switchable bypass modes. The Dreamscape won't take up lots of space one your board unlike the several modulation effects it replaces, and with its simple controls you will have your perfect modulation effect instantly available.

Versatile, built like a brick, filled with great sounds and always updatable - it certainly lives up to the excitement it's been generating since it was announced.