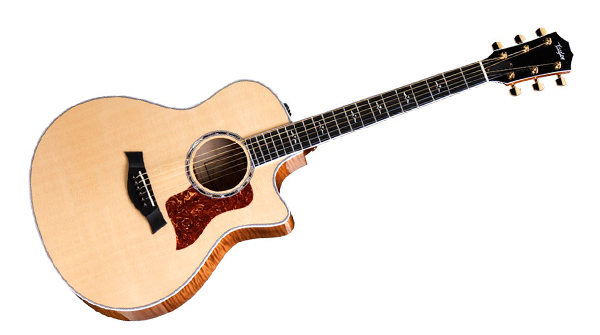 As traditional tone woods like mahogany become harder to source consistently and questions about the sources of a disturbing amount of the wood used in guitar making continue to grow, makers are starting to consider their environmental impact more seriously, and acoustic guitar construction has been slowly changing as a result. The search for alternatives to mahogany has led to a number of other woods being tried in its place, but it has to be said with very mixed results. Taylor has now tackled this problem though, and have done so in a typically thorough way. But how are the results and will we all be swapping our mahogany instruments in favour of a more environmentally friendly alternative?

Taylor has always been at the forefront of acoustic building innovation and its 600 series is certainly unlike almost any other acoustic guitar you’ll have ever played. Whereas the vast majority of acoustics on the market use some form of mahogany or rosewood for the back and sides and generally use mahogany for the neck, the 600 series are made entirely from maple, matched with a Sitka spruce top. Maple is actually a very commonly used tone wood for archtop guitars and smaller instruments such as violins and mandolins. It has a very obvious visual benefit over mahogany in that highly figured pieces such a flamed and birdseye variants can be used for extra visual flair, whereas mahogany tends to have a much neater, more uniform and less pronounced grain. However, the tonal requirements of a flat-top acoustic are not the same as for an archtop guitar or violin and previous experiments by other companies have often fallen short of the tones offered by mahogany.

The 616ce is constructed using flame maple for the back and sides with a Sitka spruce top and hard rock maple neck with an ebony fretboard for added tonal ‘snap’ and stability. Taylor uses a process called 'Torrefaction' to essentially ‘bake’ and ‘season’ (no cooking puns intended) the wood, giving it the tonal characteristics of an aged and well played top straight from the factory. To allow the maple back and sides to vibrate as freely as possible a super thin ‘brown sugar’ stain has been applied to the wood that is finished in a thin gloss offering protection without restraining the natural resonance of the guitar. The back bracing has also been modified for the 600 series to allow the maple body to vibrate in the most efficient manner and produce the best tone possible from this wood combination.

Hardware is of the usual Taylor high standard with quality nickel tuners, tall and thin frets, an Expression 2 pickup system, Tusq nut and Mircata saddle. The 616ce is also a very pretty guitar thanks to the gloss peghead with rear inlay, wings inlays on the fretboard, a stunning abalone rosette and striped ebony pickguard. Combined with the flamed grain of the back and sides finished in the sumptuous dark brown stain and the beautifully executed ‘venetian’ cutaway, the 616ce is a stunning looking instrument that will elicit ‘oohs’ and ‘ahhs’ from all who view it.

Build quality is everything we’ve come to expect from Taylor, resulting in a completely flawless instrument that feels high end in every way. The fret work is some of the best you’ll come across and every element of the guitar is finished to the highest standard - as it really should be for this amount of money. This sense of real quality is extended to the included deluxe hardshell case that provides a lovingly crafted home for your precious instrument. Playability is equally impressive thanks to the very comfortable neck profile and Taylor’s very approachable ‘Grand Symphony’ body shape. The cutaway allows easy access to all 20 of the 616’s frets and the guitar proves equally playable for simple strumming, fingerpicking or plectrum lead playing thanks to a set-up that is just as friendly for those more used to an electric guitar as it is for the more seasoned acoustic player.

Tone is where the 616ce really impresses in a big way, with an incredibly dynamic and pianistic sound that would give any mahogany guitar a run for its money. Taylor has really achieved something great with the 600 series with a big bottom end thump matched with lovely smooth highs and a very impressive ability to translate even the most nuanced attack with accuracy and subtlety. The Expression System 2 is renowned for its ability to give a miked-up sound from its piezo pickups and the system works beautifully with the 616ce, translating all of that tonal range very effectively, offering better tone than you would get from many mics both in the studio and for live use. The set-up is very simple with just Volume, Treble and Bass controls but offers enough tonal control to produce a wide range of sounds.

The 600 series is without a doubt an expensive instrument that will be well beyond the affordability of many guitar players, but the age old adage of ‘you get what you pay for’ really applies here as Taylor has produced a guitar that is truly worth that high price tag.

And even beyond its qualities as a remarkable guitar in its own right, the 616 CE seems to have achieved the impossible. It does away with any concerns about the use of tropical mahogany, replacing it with a wood that is grown in properly managed forests in the Pacific north west of America. Despite the use of an unconventional wood, it still manages to sound superb. There can be no doubt that, always assuming you can afford it, the Taylor 616ce comes very highly recommended indeed.