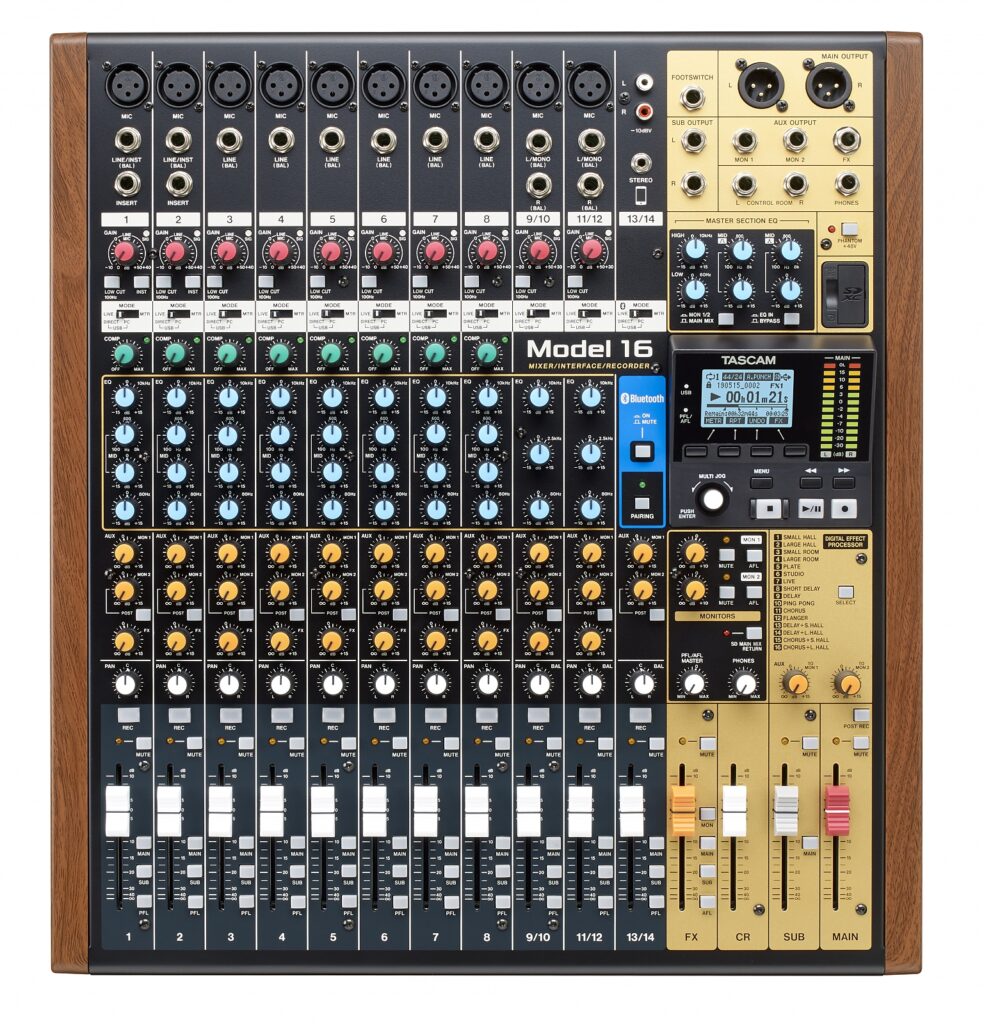 Easy operation with plenty of power

The Tascam Model 16 is a fully-featured 14-channel analogue mixing console combined with an impressive 16-channel multitrack SD-card digital recorder and 16 in/14 out USB audio interface (both of which function at 24bit 44.1/48kHz). Any one of these elements is useful, but combining them into a single, well-built and designed product, makes the Tascam Model 16 a potential powerhouse for live or studio work that we just couldn’t resist checking out.

The Model 16 is a more compact version of Tascam’s flagship Model 24 mixer/digital recorder, featuring less inputs and a smaller footprint, but with an otherwise very similar feature set. Tascam provides 10 of their Ultra HDDA XLR preamps/balanced line inputs for the Model 16 with the first two analogue channels offering instrument level inputs, plus insert points for patching in outboard gear on those channels. Phantom power is provided but can only be switched on or off globally, so you need to be careful what you have plugged into the XLR inputs to avoid damaging sensitive mics or other XLR equipped gear.

The first 8 channels have a single knob, in-line compressor and three band EQ with a sweepable mid-range from 100hz to 8k. Channels 9/10 and 11/12 can be run as stereo balanced line inputs or as a single mono XLR input each and have access to a three band EQ with a fixed 2.5kHz mid control to avoid any phase issues whilst running in stereo. Finally, inputs 13/14 feature stereo RCA, mini jack and Bluetooth 5.0 inputs for running external tracks or audio into the mixer. All three of these inputs can be used simultaneously if required but have no dedicated EQ controls. Channels 1 through 12 also have access to a 100hz low cut button.

At the bottom of each channel strip you’ll find a 60mm fader offering enough resolution for precise mixing, a pan control and a record arm button for sending the signal to the digital multitrack recorder. Each channel has a dedicated mute button and routing buttons for the Main and Sub outputs plus a PFL mode for Pre-Fader Listening. There are dedicated outputs for the Main, Sub and Control room with a separate fader for each, plus a headphone output and level control and three Aux Outputs that can be used for wedges on stage, outboard gear sends, or any other purpose required.

The third Aux is dedicated by default to the onboard digital FX processor, featuring 16 common effects such as reverbs, delays and modulations. These can be edited to some degree using the LCD screen and menus and sent to the Monitor Aux Outs, Main, Sub and AFL groups. A master 4-band EQ section offers a pair of semi-parametric mid controls and can be sent to the main mix or monitor outs as required.

As an analogue mixer the Model 16 is certainly very capable and sounds great thanks to the quality preamps and EQ/compression sections. It’s also a superb digital multitrack recorder with dedicated transport controls, a convenient multi-jog wheel and a bright LED screen allowing for onboard mixing, accurate metering, overdubs, punch-ins and footswitch-based operation.

Where things start to become really exciting, however, is with the Mode control on each channel. Each channel can be set to receive input from the live analogue inputs, USB PC inputs or the onboard Digital Multitrack Recorder. This means that you can setup any combination of analogue or digital inputs for a whole swathe of live and studio-based scenarios. For example, you could route audio from your DAW into each of the 14 channels to mix directly on the desk, benefitting from genuine analogue summing, EQ and compression in the process. You could then record the results directly as a stereo mix down onto the SD card with the master EQ applied for mastering purposes. Alternatively, your digital recorder tracks can be transferred directly to your computer for mixing within a DAW and then back again for analogue mixing and summing later in the process.

For someone doing masterclasses or clinics, you could run your guitar or live instruments and mic into the line/XLR inputs and then run your multitrack backing tracks from either the Digital Multitrack recorder or your DAW with the ability to mix them in real time for the room you’re in, whilst recording the entire clinic onto either the SD card or your computer for mixing later.

Bands can run a combination of live instruments and digital tracks from the SD card or their DAW and control the levels and mixed signal going to front of house, personal monitors and in-ears all from a single desk and then record their show via either the digital multitrack recorder or in their DAW if they’re not in use playing tracks. The Model 16 also allows users to record a stereo mix down of all the inputs at any time for reference or delivery purposes. The possibilities that this hybrid device offers are endless and provide options that were previously only available with multiple pieces of gear.

Tascam has got a major winner on their hands with the Model 16. From a feature set point of view it’s a superb product from the get go, but combined with the impressive flexibility of the Mode switch on each channel it becomes a swiss-army knife of the audio world that makes it an amazing value proposition for bands and studios alike.