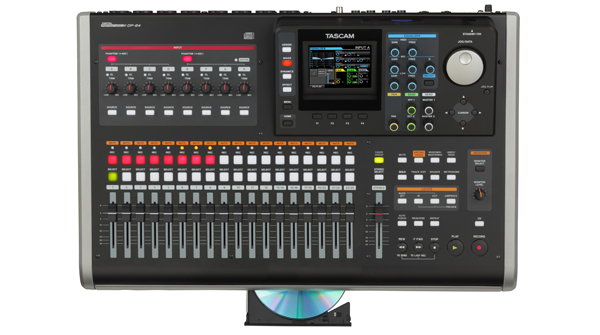 Many years ago I “upgraded” from my Tascam 4–track cassette recorder to a copy of Logic running on a PC that I built myself (this was before Apple killed the PC version of Logic). At about the same time, my friend Dave bought a digital multi-track recorder. I pointed out to him all the reasons why he had made a mistake, explaining how much more flexible my PC set-up was, how I could add 3rd party effects and instruments, choose an interface to suit my expanding needs, record a million tracks of audio and MIDI, and so on. Needless to say he recorded his first EP before I had my 3rd-party drivers and IRQs sorted-out, and then continued making recordings where and when it suited him, as I migrated to Cubase and started-over again. While I enjoyed the flexibility of installing (and deleting) hundreds of freeware plug-ins Dave just carried-on recording lots of music. Hmm!

After many years of hard use Dave’s multi-tracker started so show signs of wear, and when he looked for a replacement he found that the market had pretty-well abandoned the all-in-one concept, and was now geared towards either a laptop (or even tablet) based DAW with a compact audio interface, or else a simple portable hardware recorder with a DAW back-at-base for mixing.  That would be pretty-well the end of the story, except that Tascam, the manufacturer of my old tape machine, still has faith in the format.

The DP-24 Portastudio is a 24 track recorder/mixer/mastering unit with eight analogue inputs (line/mic, phantom-power available on all of them, plus a switchable guitar hi-impedance option on channel 8) and 18 channel faders (12 mono, 6 paired) and a Stereo master fader. The device records to solid-state SD/SDHC cards (2Gig included) which are cheap, easy to replace, silent in use, and convenient for transferring data to a PC/Mac for processing or archiving, but are typically much smaller than the 10s of Gigabytes of hard-drive capacity found on previous generation models. Personally I’ll take the cards every time, but be aware that you’ll have-to spend a little additional cash to get proper work capacity.

Now most review kit comes with some sort of Owner’s Manual, and most of the time                                                                                           it stays sealed in the shipping bag until the kit is returned; so it was a bit worrying to find a well-thumbed 100+ page paper manual tucked-into the packaging. Being a professional I put it straight back into the box, cleared a bit of desk space and dug-out the in-line power supply. Press and hold the Standby/On button for a few moments then wait as the (very clear) colour display entertains you for about 12 seconds and you’re good to go.  I managed to create and name a new song, plug in a handy SM57 and a pair of headphones, assign mic input A to channel 1, arm it and record a (very, very bad) medley of a cappella Elvis songs in just a few minutes without using the book. Good start. Two or three minutes of head-scratching and I’d figured how to select each channel (press the “Select” button!), apply EQ (use the EQ knobs!) and compression and send the track to the internal effects unit. Plug the Tele into input 8 (input “H” actually) with the instrument input switched on, add a bit of built-in amp-sim, compression and delay and I can almost hear James Burton sobbing in the background!

It’s all surprisingly easy, as is mixing down to 2-tracks, applying final EQ and compression and burning to an audio CD using the integral drive; once you get your head around how to select menu items and change values, it quickly becomes second nature to use the dedicated Assign, Mixer, Dynamics and Effect buttons as needed, and to “rest” on the Home screen which shows levels for all channels at the same time along with the timer.

Obviously there are limitations involved in packing so much into a portable chassis; you don’t get the massive range of variety of effect that you can plug-into a DAW, the faders are compact 45mm varieties (nicely weighted though) and are non-motorised (no mix automation), the pre-amps are a little noisy over their last few degrees of travel (so are some “nice” pres, that cost about as much per channel as you pay for the whole of the DP-24), there’s no digital IO and the internal effect routing and DSP is a bit limited (you can use only one effect in each category at a time, so no compressor+noise gate, no reverb+delay for example); but that’s not really the point here. It’s a studio-in-a-box – a PORTAbleSTUDIO.

There are plenty of features built-into the DP-24, and I don’t want to turn a review into a tutorial, but you get MIDI sync/control, optional footswitch start/stop recording, a metronome (sadly no drum machine) and there’s a tuner for the instrument input. You can also loop audio, assign up to eight “virtual” tracks for alternative takes to each real track, punch-in, move audio, bounce tracks, undo/redo last operation, copy tracks to/from a computer, name/rename tracks, clone tracks, assign tracks to a fader group, and you can even mix-down 8 live tracks against 24 recorded ones to make a 32 track recording! Quality is well judged; the case is solid with metal top and base plates with no noticeable flex (it’s heavier than I expected at just over 6 kg but still easily portable) and whilst the input gain knobs feel a little wobbly because of the way they are mounted, nothing was loose, nothing rattled, and everything worked precisely and consistently. Pre-amps and conversion are better than good enough for the job and the control layout seems to have been designed by someone who actually cares about (and understands) what the user wants to do.

To be honest, I always figured that the all-in-one multi-tracker was just an overly complex location recorder, best used for making basic recordings before transferring the data to a proper DAW for mixing, but I’m beginning to think that I may have missed the point. While the DP-24 has been with me I’ve used it to record some tracks, imported some raw tracks to mix and generally got through a lot of work in a short space of time, because, well, if I thought I wanted a compressor I just inserted the built-in comp, set it and moved on to the next decision, without getting hung-up on what sort of picture I want on the faceplate of my plug-in. When I got fed-up of staring at the studio walls one night I took it into the living-room and mixed on headphones as I watched SpongeBob! All in all it was really inspiring and, dare I say it, FUN. I’d certainly hesitate to lose the power, workflow and sheer quality of my DAW set-up for serious third party mixing, but I’ve got a feeling that my band’s EP would have been completed months ago if I’d started it on a Portastudio, and I’m just starting, rather late in the day perhaps, to think that there might be something to be said for a format that focuses you on making music instead of playing with the toys.

I’m really quite surprised by how much I’ve enjoyed using the DP-24. If you want to produce good demo-quality recordings without getting buried in recording tech then I’d certainly suggest taking a look at a Portastudio.