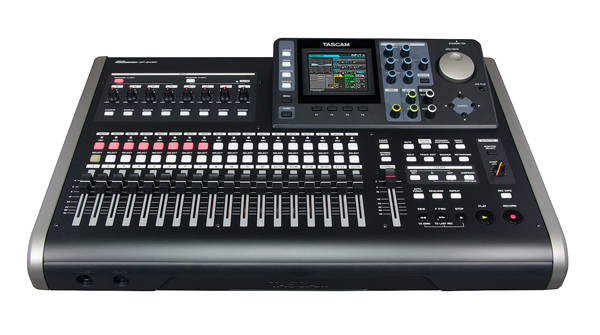 About a year ago I reviewed the Tascam DP-24 multitrack recorder (it's in GI 28 - Ed). At the time, I felt that the all in one recorder was becoming a beast out-of-time, and that everything you could possibly want to do with a recorder was easier and better on a computer. At least that’s how I felt until I started to play with it, and I actually found it to be quite liberating to have the freedom to work anywhere and still get good quality results. My final conclusion at the time was that...

“All in all it was really inspiring and, dare I say it, FUN. I’d certainly hesitate to lose the power, workflow and sheer quality of my DAW set-up for serious 3rd party mixing, but I’ve got a feeling that my band’s EP would have been completed months ago if I’d started it on a Portastudio, and I’m just starting, rather late in the day perhaps, to think that there might be something to be said for a format that focuses you on making music instead of playing with the toys.”

When I got the call to ask if I’d be interested in reviewing the DP-24SD I leapt at the chance.  I’ve thought a few times since returning the previous unit that it could have been handy to have in the studio when my band is rehearsing, so “yes please, let’s be having it”.

Sometimes a new piece of equipment has a sense of the familiar about it - and that’s certainly the case here. As I started playing with the DP-24SD I found myself remembering more than I expected, and was surprised by how similar it is in use. It’s very similar. Very, very similar. In fact, as far as I can tell, it’s exactly the same except that it doesn’t have an optical disc burner. So - if you want to know about the DP-24SD, pop over to issue 28 and you can read all about it. (You can find it here http://edition.pagesuite-professional.co.uk//launch.aspx?eid=b9caf160-9ec7-4d23-af3c-c5202267cdc5&pnum=174 )

Is that the end then?  No, not really. I can’t actually remember if I looked at the price of the unit I reviewed previously, but I checked the real-world cost of this one today and you can get it for less than half the price of the DP-24’s list price when it came out. All of a sudden I don’t feel that I’d need to justify one of these on the basis of enjoying the freedom to mix in bed, to record, mix and master my work anywhere with a power socket, or the fuss-free workflow and focus - I could justify this as an easy to use multi-track recorder that’s got some other stuff hanging on the back of it.

Oddly enough, whilst I was playing around and re-familiarising myself with the controls, I plugged in a guitar and started noodling. There’s no drum machine but the built-in metronome is perfectly adequate (once you turn it down) and the amp-sims won’t replace my Bias Pro/Amplitube/S-Gear rig just yet, but once again I found myself having fun, and recorded the outline parts of a song without really thinking too much about it. Unfortunately, I later realised that I wrote and recorded a better version of the same song about six months ago, but that’s hardly the Tascam’s fault!  I may just tell Tascam that I’ve not finished this review and see if I can keep hold the DP-24SD for a few weeks until we finish our current run of rehearsals. I’ve enjoyed revisiting the DP-24 Portastudio. It works as well as it ever has, and at today’s prices it’s a fine option, even if you just need a location recorder.