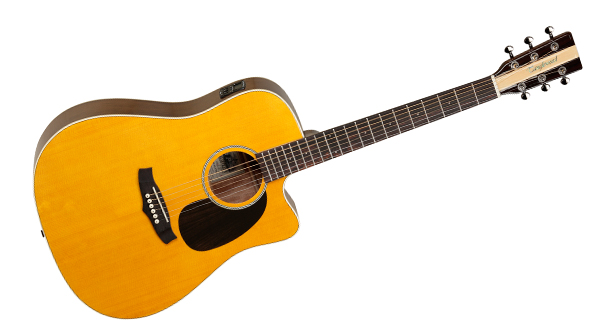 Tanglewood is one of the best known producers in the European acoustic market and more or less invented the high bang for your buck acoustic guitar phenomenon, when it took on the big name brands, offering better guitars for less money. Over the years, Tanglewood has become a pretty big brand in its own right but the policy continues, though the company now also produces guitars at the top end as well as the familiar middle and lower middle price ranges. This Tanglewood, one of the new Nashville V series, is firmly in the lower mid-market territory, a difficult area as it is now so hotly contested.

The TN5 D CE is a dreadnought sized cutaway electro-acoustic with a solid spruce top sporting a very attractive amber gloss finish. Laminated African mahogany is used for the back and sides. I won't get into the laminate vs solid argument here because at this price you are very unlikely to find an all solid wood guitar and this one has the solid wood where it's really needed - on the top.

The new look headstock adds to an already good looking instrument with a top quality finish and attention to detail throughout. The 21 fret mahogany neck and rosewood fingerboard was a pleasure to play. I am happy to report that there were no problems with fret buzz, difficult action or intonation issues which can sometimes rear their ugly heads at low-mid priced acoustics. The neck size was very similar to that of an electric guitar, also making things very easy going.

For the price range the wood choice and quality is a good option and won't leave you disappointed, the mahogany complementing the large body size and offering plenty of warm bottom end with the solid spruce bringing out the mids and highs. All the notes rang clear, including individual notes in a chord, nothing ever sounded muddy or lost in the mix. The guitar resonated well, generating good acoustic volume and dynamic range. It's also worth mentioning that the bridge is the same wood as the fretboard.

So far so good. In fact, so far so very good. But the TN-5 impressively offers a pickup and tuner as well, which is pretty good going for this money. How do they perform? Well, not badly at all. The Tanglewood TEQ-3BT pre-amp, as well as featuring a built in tuner, offers three band EQ, with a cool feature where the knobs remain flush to the pre-amp until you push them and they pop up for adjustment. This is a great idea, preventing any accidental nudging in the heat of the moment. The pre-amp and pickup worked well. As you might expect at this price range, it's not the best on the market and I did notice a little loss of bottom end when plugged in, but overall the quality when in use was fairly decent if a little thin, with no issues of feedback or over compression. The unplugged acoustic sound is so good that putting a good quality mic in-front of it may be a better option if it’s available. Alternatively, if you were going to keep the guitar for a long while, it might even be worth upgrading the pickup at some point and the guitar is good enough to justify that.

By any standards, the Tanglewood TN5 D CE is a very good low-mid priced electro acoustic. Our sample was well set-up, making it easy to play, and it delivered a solid quality acoustic tone. It’s also a good looking instrument that looks way more expensive than it is. It's not a world class recording studio acoustic, but that's not its job. If you are looking for a good sounding, easy to play acoustic guitar with the added bonus of a built in pre-amp, then you won't go far wrong with this one. Finally, just to tip the scales even further in its favour, it even comes with a decent quality case. Once again Tanglewood delivers the goods.