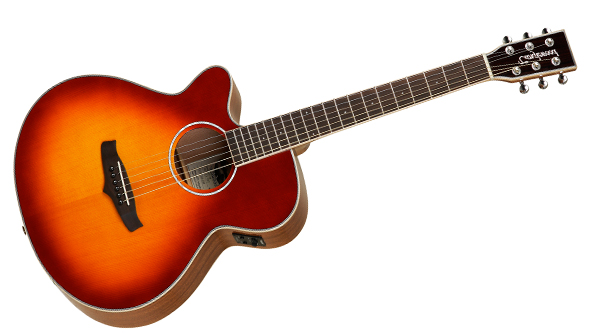 Making an expensive acoustic guitar isn't easy but in some ways, making an inexpensive one is even harder. To begin with you have to have them made in the Far East in a factory you probably don't own, with all that means in ensuring quality control, then you have to transport them across the world to all the different markets they will sell in. Given that acoustic guitars don't really enjoy travel, that makes doing it at a bargain price a tough call. Fortunately, Tanglewood has tremendous experience at this, having been one of the first 'new wave' acoustic guitar brands. Nevertheless, if you are looking for an affordable, easily playable and usable acoustic guitar, you are absolutely spoilt for choice in today's market. Never has it been so easy to get so much for your money, so how does Tanglewood's new baby, the Evolution IV stand up to its many rivals?

The first thing to say is that the Evolution IV is a well made guitar that is very playable, with a nice even response in all the frequencies. It even comes with the onboard Fishman Isys preamp that sounds great and is dead simple to use, with just a volume, tone and tuner to deal with. It's virtually plug in and go because it instantly sounds good. Sometimes you can get bogged down with EQ options on some pre-amps, but in this case, less is definitely more. Later on you might want more, but to get you started, this is great.

Finer points of the design for the Evolution series came from Swedish guitar builder and luthier Michael Sanden. I can't exactly say what Michael Sanden's contributions were, because on the face of it, everything looks fairly usual and nothing particularly jumps out as being a design departure from the norm, but I'm sure the Tanglewood and Michael Sanden collaboration has played its part somewhere. It's usually in things we can't see easily, such as the bracing, which on the Evolution is tapered and parallel apparently. Looking inside the guitar it all looks very neat and well put together.

The body shape on our sample model is classed as a 'Super Folk' and obviously the cutaway makes playing up the dusty end much easier. A very nice touch is the maple binding around the body, which looks great against the sunburst spruce top and mahogany back and sides. These aren't solid woods, which may seem to put the Evolution at a disadvantage compared to some rivals, but there's something to be said for the stability of laminates. They are calling this finish Tobacco burst, by the way. The neck is mahogany with a rosewood board which is again bound nicely with maple. It feels comfortable to play, so should cater for most hand sizes. The bridge is also rosewood with a compensated saddle made from 'nubone' and strings are kept in place by the ABS pins. The nut width is 43mm and feels good.

So we have an English name, a Chinese manufacturer and Swedish designer, that between them have come up with a perfectly well made guitar that is fine value for money. I probably should add that the Evolution IV series has a lot of options, in case a Super Folk size wasn't quite what you were after. According to Tanglewood's website, the company offers this range in sizes from a Dreadnought down to a parlour size and even includes both a 12-string model and an acoustic bass. If they are all as good as this, Tanglewood is going to do very well with these - as are its customers. It's up against some stiff competition including from the 'big boys' like Yamaha and Fender but it more than holds its own, living up to Tanglewood's reputation of giving that bit extra for your money.