If you've always wanted a guitar with stunning looks and a sound to match but assumed it would be out of your price range, think again.

Tone perhaps a little thin when plugged in

A genuine Koa wood acoustic guitar for how much?! Used as we are to being surprised by Tanglewood's value for money, this new Evolution Exotic took even us by surprise. Lewis Turner explains.

Tanglewood's ability to produce guitars that are way better than their prices suggest they should be never fails to impress us at GI.  We've had many Tanglewoods pass through the doors at our studio and have yet to be disappointed. Personally, I have played many and still own one that continues to sound better with age. So I had pretty high hopes of the TSF CE X KOA from their Evolution Exotic range, though there's always a first time, I suppose! Be sure to check out the accompanying video to see and hear this guitar for yourself.

As the name would suggest, this super folk cutaway electro-acoustic from Tanglewood uses koa for the top, back and sides finished in a very pleasing to the eye natural gloss. The new look headstock adds to an already good looking instrument with a top finish and attention to detail throughout. The 21 fret mahogany neck with a rosewood fingerboard was a pleasure to play. I am happy to report that there were no problems with fret buzz, unplayable action or intonation issues which can sometimes rear their ugly heads at low–mid priced acoustics.

Adding to the pleasure was that the neck size on this model seems very similar to that of an electric guitar, which makes things very easy going and will mean that if you are primarily an electric guitarist who wants an acoustic as a second instrument, this would be a very suitable choice. Tanglewood really has put the player first with a guitar that is so easy and effortless to play, other manufactures take note, acoustics shouldn’t be hard work to play!

For the price range the wood choice and quality is a good option and won’t leave you disappointed, the koa providing a good tonal platform that accentuates the mids and highs, with the mahogany neck bringing some of the low end. The guitar resonated well, generating good acoustic volume and dynamic range, all the notes rang clear including individual notes in a chord, and lead playing was an absolute joy with nothing ever sounding muddy or lost in the mix. It's also worth mentioning that the bridge is the same wood as the fretboard, by the way.

The set-up on our sample guitar was perfect, offering great tuning stability courtesy of the die cast chrome tuners and the intonation throughout was spot-on, which is just as well as the cutaway allows reasonable access to the high end frets.

This Tanglewood models uses a Fishman Presys/B-Band M450T. As well as the standard built in tuner, it also featured a three-band EQ. The pre-amp and pickup worked well, but as you might expect at this price range it's not the best on the market and I did notice a little loss of bottom end when plugged in, overall though the quality when in use was fairly decent if a little thin, with no issues of feedback or over compression. The unplugged acoustic sound is so good that putting a good quality mic in front of it may be a better option if it's available. You might even consider a more expensive Fishman as an upgrade at a later stage because this guitar sounds good enough to deserve one.

In conclusion, the Tanglewood TSF CE X KOA is a very good low-mid priced electro acoustic, well set up making it easy to play and offering a solid quality acoustic tone. It's also a good looking instrument that looks way more expensive than it is. If you are looking for a good sounding, easy to play acoustic guitar with the added bonus of a built in pre-amp, then you won't go far wrong with this one. Once again Tanglewood delivers the goods! 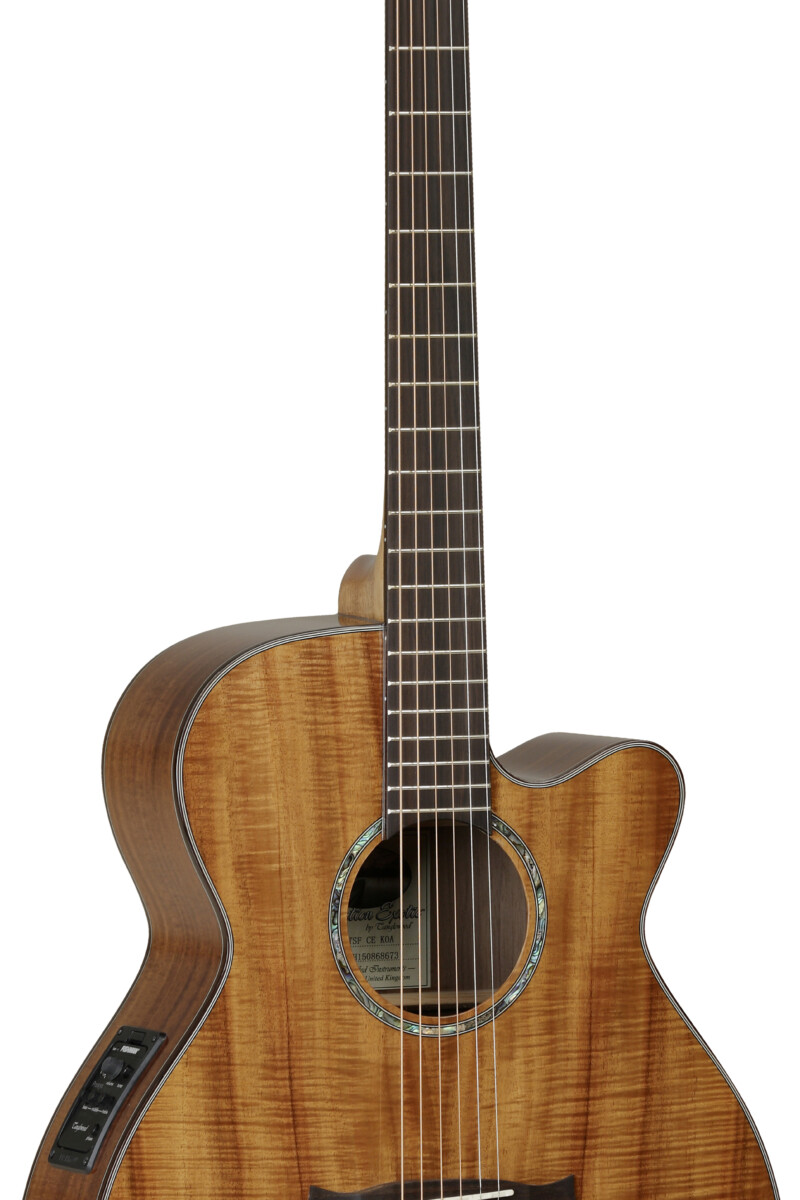