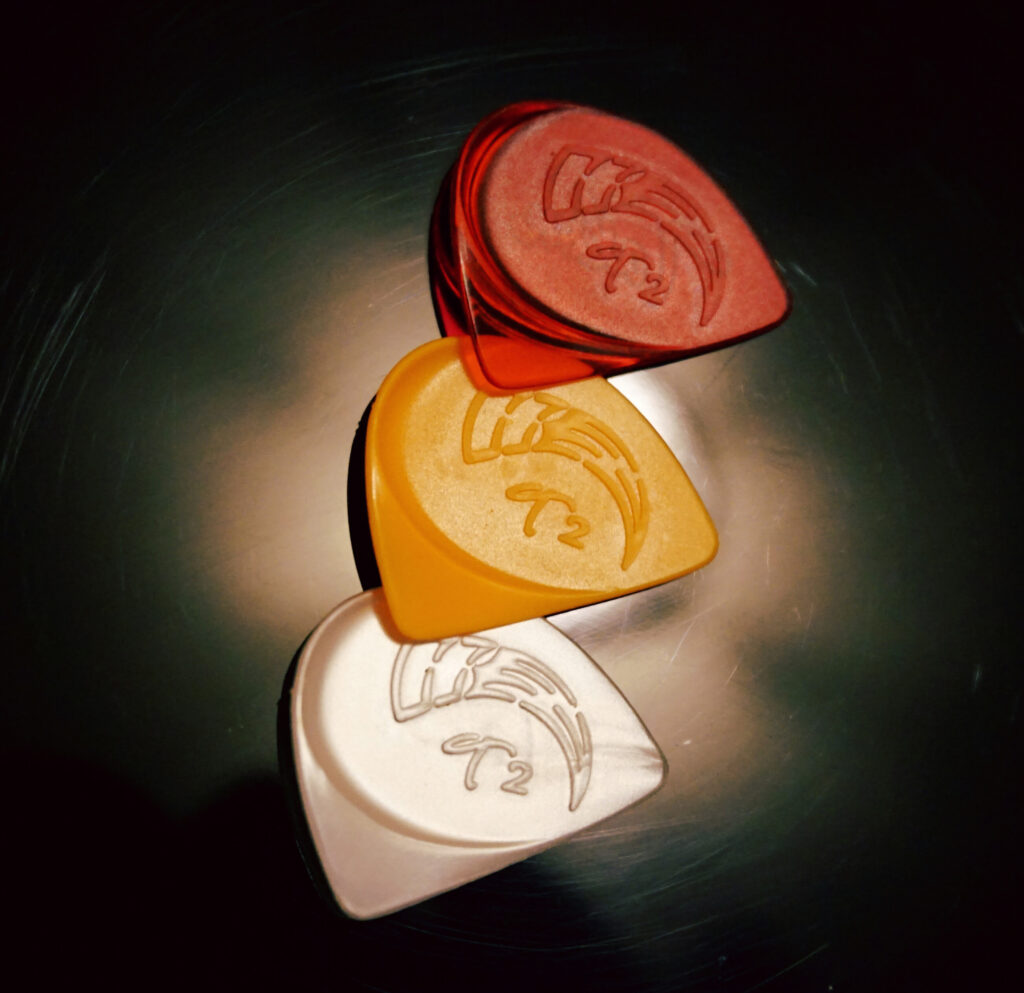 The Talon pick is a really interesting idea in a market that is based on pretty much a single idea – the tear drop design.

Brand new from a US designer and manufacturer, Talon guitar picks promise a new direction in the evolution of guitar picks. Tom Quayle tries them out.

There are quite a few companies now making high end, boutique picks from all manner of interesting materials, most designed to improve your speed, tone or longevity. There isn’t a great deal of innovation going on, however, in terms of pick shape and physical design, with most manufacturers sticking to the tried and tested teardrop shape that guitarists have come to know and love. Now, you mess with tradition at your peril in the guitar world, since we are such a hard bunch to be persuaded into change, but that hasn’t deterred US pick company ‘Talon Elements’ from coming up with a very interesting new pick design called the ‘Talon Guitar Pick,’ introducing some genuinely new ideas to the plectrum world.

The Talon is unique in that it offers a very unusual, contoured cradle area for the thumb to sit in, with an angled bevel that is raised away from the thumb and offset against the string by varying amounts to get increasingly aggressive pick attack and brightness. The four models, named T1 to T4, gradually increase this string offset angle and thumb cradle depth to take you from a warm and loose attack at the T1 end to a very bright and strong attack at the T4 end. Whereas a normal pick will always see you picking with the edge of the pick directly between the thumb and finger, T1 through T4 gradually move the pick edge further up your thumb, presumably to increase the amount of attack you get when performing down and upstrokes. This is a really interesting idea and unique as far as we know within the pick market.

Each model is available in the standard Light, Medium and Heavy materials that are colour coded Pearl, Mango and Ruby respectively and fulfil the role you would expect from such labelling. The light picks have much more flex in them for more click in the pick attack, ideal for strumming or funk playing and a lighter attack for lead playing, but with less accuracy. The Medium, Mango picks offer less click for strumming, but more attack for lead work without getting the extreme levels of attack and accuracy required for fast lead work. The Ruby picks have a bright tone that really accentuates the thumb cradle design with pretty much more attack than we’ve ever heard from a pick at the T4 end of the spectrum. The Ruby T1’s were this reviewer’s personal preference.

The idea behind having such a wide range of picks, 12 in total, is that Talon asserts that the angle and attack of the pick change depending on whether you are sitting, standing, playing acoustic or electric guitars and the Talon range allows you to choose the model and material that works best for each scenario you find yourself in. Most guitar players find themselves sticking to a particular pick that they find works for them in all scenarios, with the exception of acoustic strumming, where a thinner pick is often the preference due to the click in its attack. The Talon range allows you to choose the right pick depending on how much your pick angle changes when you stand up or sit down, a great feature that could really help some players out if they struggle to adapt with a normal pick.

The Talon picks certainly achieve what they set out to with a remarkable level of increase in the attack and brightness of your sound as you move from T1 to T4 in each material. The offset angle against the string at T4 is quite extreme and gives an incredibly bright attack compared to the modest T1. In this regard, the Talon Pick is a huge success and is totally unique within the market. There are some downsides to the design though in that it can feel really weird playing with a pick whose point is attacking the string half way up your thumb as opposed to directly between your finger and thumb.

Guitar technique is very intuitive after a number of years of playing and even the smallest change can take a long time to adjust to. Having your thumb sit in a cradle with a moulded grip means that the pick is hugely secure in your hand, but the T4 model can take a lot of getting used to from a technical stand point and may really throw a lot of players, even though the attack you can achieve for the right style of music is seriously impressive.

Another issue is that the design dictates where your thumb is positioned relative to the end of the pick. Personally, I like to have a very small amount of pick showing from the end of my thumb and finger when I play. The Talon pick design dictates that I must have quite a large amount of pick exposed to the string and I can’t change this to make the pick feel more natural to me, since the thumb cradle prevents this. You can turn the Talon pick around and use the other, standard point for what Talon call the ‘Full Pick Position’ (basically a standard guitar pick), but this then defeats the purpose of the cradle, Talon design. Players like myself will really struggle to adapt to the Talon’s thumb cradle, unfortunately.

The Talon pick is a really interesting idea in a market that is based on pretty much a single idea – the tear drop design. It is highly successful at achieving its goals of allowing the player to choose their pick attack and tone with an easy to understand design system of ever increasing string angle offset. The company also produces convenient four packs for each material, called Raptor packs, that allow the player to experience all four offset angles. That said, I’m just not sure that the pick needed a redesign and, whilst the idea is very interesting indeed and pulled off with great success, the design could be quite restrictive for certain types of players and takes quite a bit of getting used to for those prepared to put the time in.

We have given the Talon picks four stars on the grounds that for the right player they could be very useful but opinions are going to vary as picks are a very personal matter. If you are looking for some new ideas and innovations to help you with your picking, the Talon Guitar Picks are well worth checking out. It’s obvious that a great deal of time and thought has gone into their clever design and they may be the ideal pick to help you out as a player. 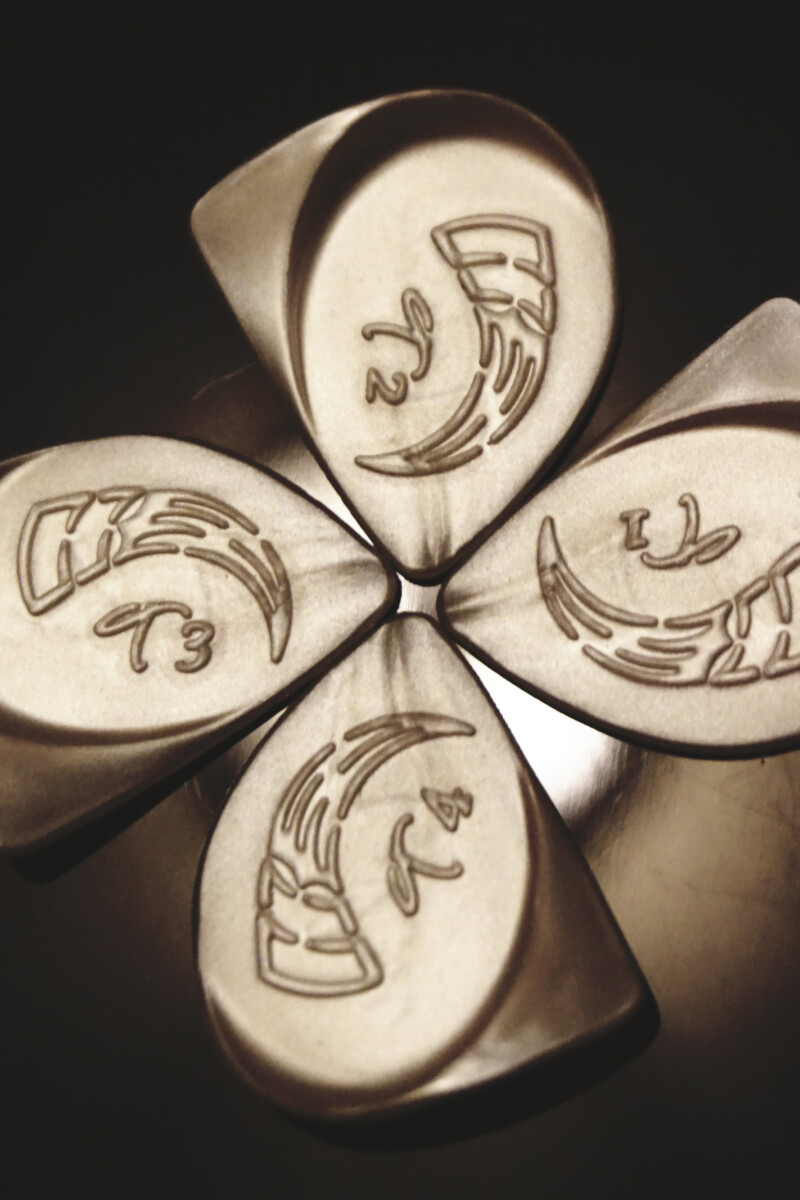 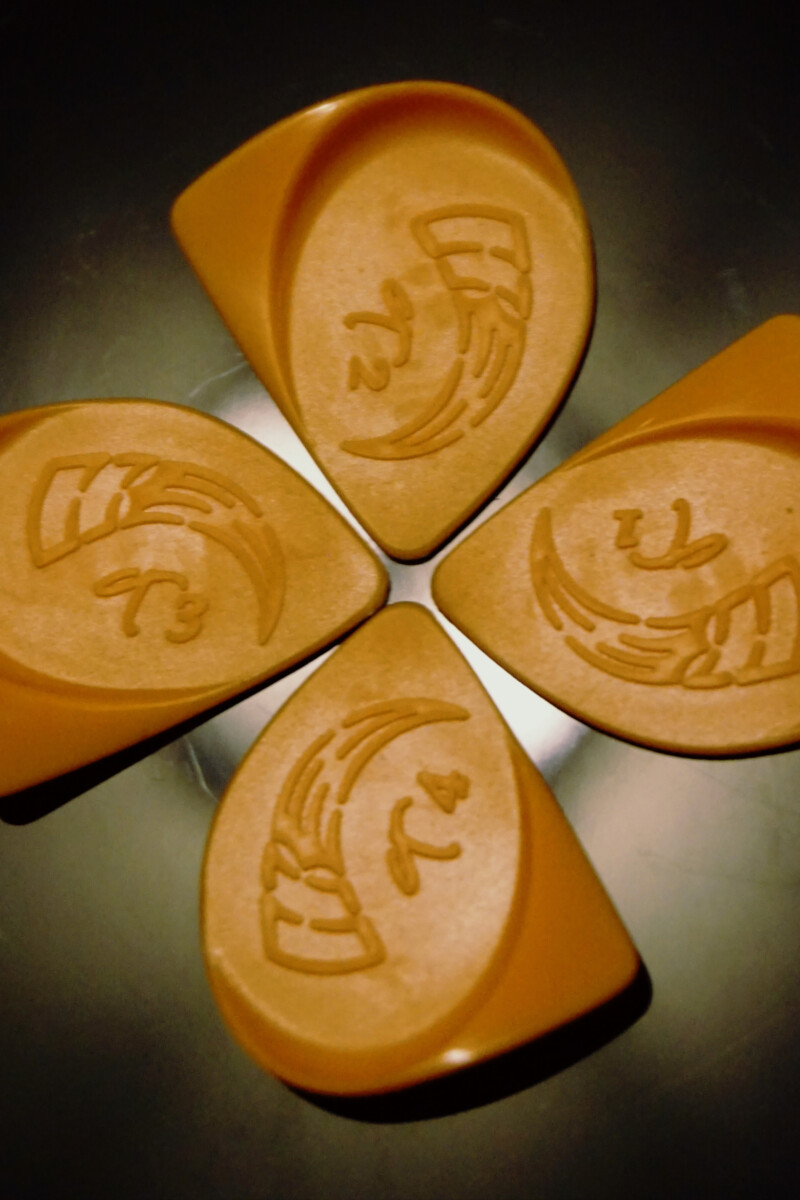 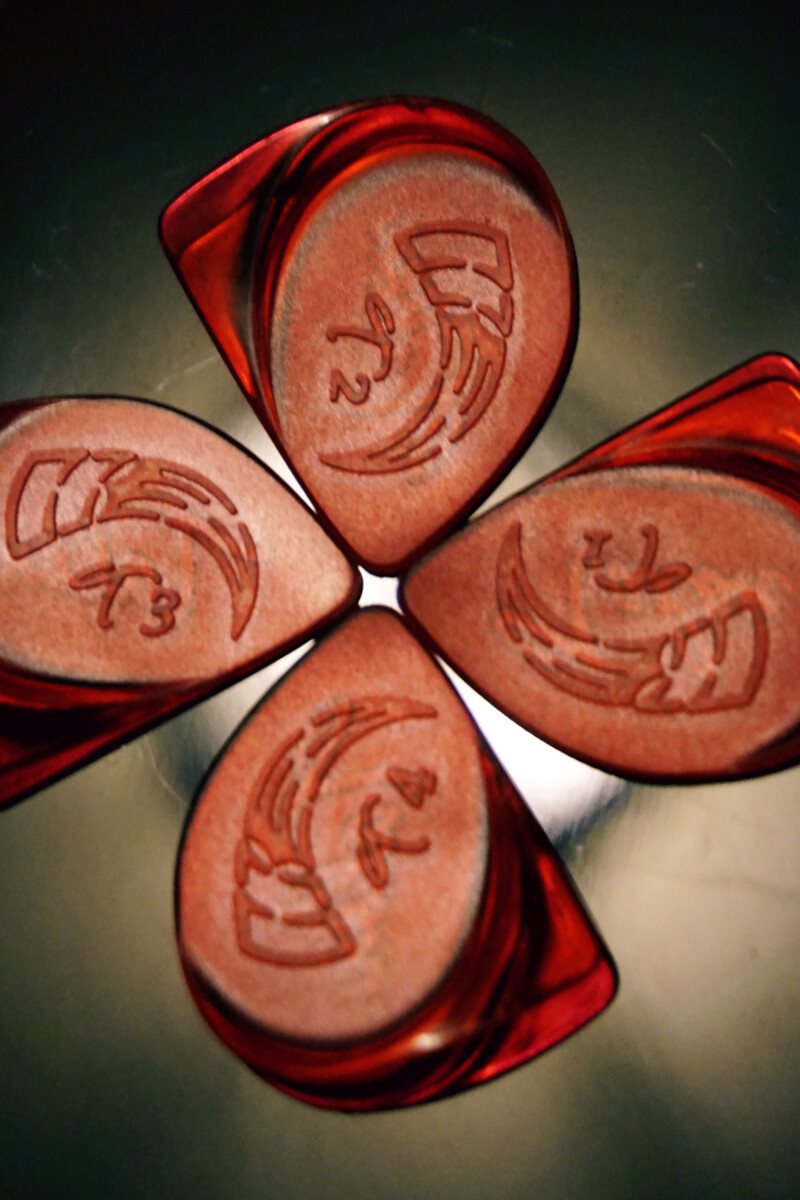