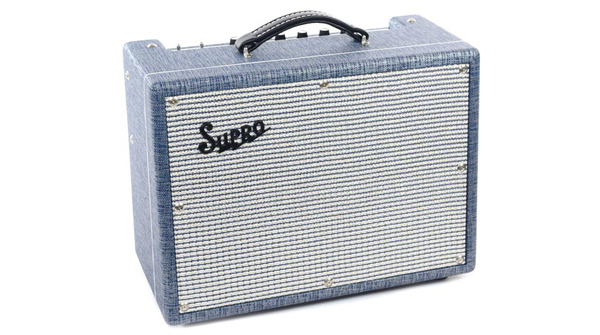 The Supro brand resonates with Rock and Blues history, from the emergence of the Chicago Blues scene through to Jimi Hendrix and Jimmy Page using them for recording in their early days. Those originals were primitive and probably temperamental (they certainly would be now if you could find an original example today! Ed.) but they certainly had a great tone. A couple of years ago, the Supro name was revived and I think it's fair to say that the reception, worldwide, has been fantastic. The reissues keep the look and tone but cleverly dispense with the temperamental part through the use of modern components and build techniques, which have made them low maintenance and reliable.

Our review amp is the Tremo-Verb 1622RT, which was launched this summer at the Nashville NAMM show. It's a loud, class A 25 Watt combo with a fat sounding 1x10 speaker and offers a great combination of portability and power. It has the real vibe of throw the amp and your 335 in the back of the car and turn up at the local Blues bar, plug in and go. As I say, it's a loud amp and 10 inch speaker sounds big and capable and ready to lock in with a live band playing a Texas Blues shuffle. That's impressive for a 10 inch driver.

No prizes for guessing why it's called a Tremo-Verb! Yes it has a great deep sounding tube driven trem which is placed after the spring reverb, giving you some real lush retro style shimmers. There is control for depth and speed of the trem, and a reverb volume. Set to taste and leave it. There is no foot switchable facility to switch it all in and out. You do it old school, and walk up to the amp and adjust it manually. I'm sure once you've done it a few times you will know exactly how you want it set.

For EQ there are simply independent bass and treble pots. They do the job perfectly well. On the far right is a volume pot, which will stay loud and clean till you get past 12 o'clock, after which you get a little extra drive as everything works a little harder, pushing those 6973 tubes. There is no effects loop as it's very much plug in, turn up and go. Although this seems a great philosophy, most players in the real world will augment this amp by plugging some stomp boxes in the front of it. It's the sort of amp that responds really well to pedals and some suitably retro sounding stomp boxes will be the icing on the cake.

Like the rest of the Supro range, the Tremo-Verb captures the era of its birth (the early 1960s) perfectly, both visually and tonally. All of the range are covered in the blue 'Rhino Hide' Tolex, which looks great and in combination with the Supro logo on the front, gives a real brand identity that just screams 'Blues club'. This wouldn't be so cool if they actually sounded like run of the mill modern amps, or even if they sounded like good modern amps - but they don't: they recreate the original tone and if that's what you want then this is very likely to be the amp for you. Being made in New York, rather than China as so many amps are today, means Supros are not cheap, but you are buying a grown-up quality product which does its thing perfectly. This amp isn't a do it all combo, it's more a do what is does really well type amp. It's portable, loud, well made and simple to use. It may be derived from the Blues scene but if you're style is authentic Blues, Country, Rock 'n Roll or Jazz, especially if you are after that 'era sound' then this amp or one of the others from Supro's expanding range will deliver really well.