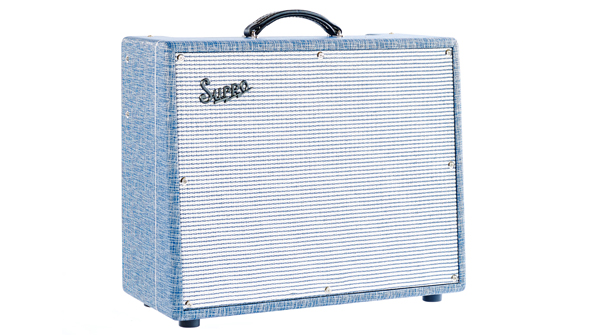 Before we talk about this amp, let's very briefly reflect on its heritage. Back in the 1920s 'National' were making guitars. In the '30s National became 'National & Dobro'. National & Dobro then became 'Valco', who started producing an amp called the Supro and the Supro amp became the favourite amp of choice for the Chicago blues musicians of the time. It was affordable and small enough to carry, but loud enough to fill a club with its great Blues tone. Around that time a very young Jimi Hendrix was using a Supro 'Thunderbolt' to back the Isley Brothers and Little Richard, and a few years later, across the pond, a young Jimmy Page picked up a Supro amp up to start rehearsals with his new band, Led Zeppelin. It is Rock history that the first two Zeppelin albums largely featured Jimmy's Telecaster cranked up through a Supro. Much of the '60s UK Blues boom drew inspiration from the sound those real Chicago blues guys were making through these amps, right up to point when some guy called Eric Clapton plugged his Les Paul into a Marshall combo and turned that up full blast. Possibly this could have been the first nail in the coffin for the Supro, because by the end of the '60s, the brand was gone.

Fast forward to 2014 and Supro amps are back to cater for the huge demand for original retro looks and sounds. Designed by Dave Koltai and Bruce Zinky of Pigtronix, the modern day versions are based very closely on the originals and are manufactured in Port Jefferson in New York. Trying to recreate the hand wired originals with their terminal strip construction would have made these modern recreations just as temperamental as the originals, plus modern safety regulations simply do not allow it, so each model has a trio of printed circuit boards that are hand wired directly to each other and direct to the transformer. There are no plastic connectors in the amp, which is a good sign that care to the design is paramount, and what we end up with is vintage tone, modern construction and above all else, reliability. Owning an original would soon become tiresome if it broke down on you every month. Our modern Supro is ready to earn its keep night after night on tour playing those Blues clubs up and down the land and it shouldn't let you down!

Our review Supro was the S6420+ 'Thunderbolt'. There are several models in the revitalised range: the 24 Watt 1x12” 1624 T 'Dual Tone', the 35 Watt 2x10” 'Coronado' and the 15” speakered Thunderbolt, which comes in basic and '+' versions. The '+' is the rectified version, which means it can be stepped down from 65 to 45 to 35 Watts. We did our review set at 35 Watts and there was more than enough volume to cater for most gig situations. What you do get at 35 Watts is quicker break-up. Setting it at 65 Watts doesn't necessarily mean it is louder (although it will seem like it is ) but it's more about having more headroom at a louder point before it goes into that bluesy break up which is very controllable from your guitar volume pot.

The Thunderbolt has a standard Class A line-up with 12AX7s in the pre-amp and a 6L6 output section feeding a custom designed 15" speaker. Apparently, Supro and Eminence collaborated closely on the design of the speakers that go into these amps and came up with a specially wound voice coil, a ceramic magnet and a stiff paper cone. The 15" driver certainly gives a great, fat roar that you can fine tune by the single tone pot. Turn it one way it becomes brighter with more high end, turn it the other and it becomes darker with more lows. Where you set it depends on your guitar and pickups, and I quite liked it set around the middle with a Strat. There is a Supro Dual Tone amp in the range which has a single 12” driver which is similar to the model Jimmy page used on those early albums, but I do like a 15” speaker and I can imagine a Thunderbolt and a Dual Tone used side by side would be an immense tone recipe!

The amp looks fantastic in blue Rhino hide Tolex, which I presume replicates the look of the originals. There is no effects loop or fancy EQ, just a volume, a tone and your rectification. You plug in and turn it up. If you want to get really high tech, you could put your favourite stomp box in line! The sound produced is full of character and mojo. It's very '60s, which is exactly what it's meant to be. The variation and character produced with this amp very much depends on you as a player. There is no hiding behind huge saturation and your touch and feel will be what gets amplified with a Supro, which is what good Blues or Jazz playing is all about.

I have never played or even seen an original Supro Thunderbolt, but I liked this modern version very much. It's not for everyone, but it really demands to be checked-out if you are looking for an authentic 1960's tone from a modern amp. With a 15” speaker it has a definite sound of its own, so make sure you try all the Supro range to see which works best for you.