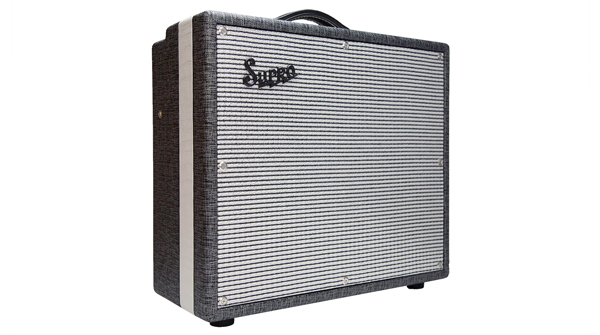 This Supro Black Magick is a modern take on Jimmy Page's 1959 Coranado that originally had 2x10 speakers in, but which Jimmy changed to a 1x12. Our modern version comes loaded with a British voiced 1x12 speaker called a BD12. The speaker has been specially voiced for this amp but at a guess it something very close to an old low powered Celestion.

The Supro's cosmetics and circuitry are aiming to recreate the vibe and mojo of Jimmy's old amp, but a lot has changed in amp design and safety since 1959 so the internals are going to be a modern design to achieve a similar goal. One thing is for sure in that a new Supro will be more reliable, robust, safer and quieter than the originals, which has to be a good thing.

Cosmetically, the Supro looks great, close to the original, coming in black 'rhino hide' vinyl with a white stripe around the edge, guaranteeing that it would look great on any stage.The Black Magick features 25watts of 6973 equipped class A power making the amp extremely touch sensitive to what you do with your guitar volume pot,  helped by four 12ax7EH pre-amp tubes. We also have two channels wired in parallel each with independent volume controls . Channels 1 and 2 are automatically linked when plugging into  channel 1 which gives you the facility to blend the independent volumes of both channels. This has the effect of driving everything harder, giving you more compression and more gain. You only really hear the benefit of this when you push the amp at higher volumes, but an input for each channel also throws open the possibility of rigging up channel switching with the use of a  simple A/B/Y pedal.

There is also a footswitchable tube driven tremolo which sounds fantastic and is adjustable with depth and speed controls. A trem foot switch isn't included with the amp but would be worth the extra investment, because for live use you would want the facility to click it in and out to add extra mojo when required.

The 6973 tubes were chosen to make this amp very touch sensitive and give it a nice warm mid range voice. If you are the sort of player that knows how to work the volume pot on your guitar then you'll get the best from this amp. For a cleaner sound you turn down your guitar, and for more drive you turn your guitar up. Simple. All Supros take pedals well, so if you want to boost it even more with over drives or boost pedals then the Black Magick will be with you all the way.

The amp delivers its real tone when you turn it up. At lower volumes it still delivers a nice tone but it will be a clean tone that creates a blank canvas for your favorite dirt pedals - to really make it sing you need to turn it up, old school. 25 Watts does seem loud when you are by yourself, with no band members to overpower your sound but if you play in a loud band then you will quickly want to max the amp's volume to hear yourself and all headroom will come from your guitar volume pot. It's at this point that we wondered if the Supro doesn't slightly fall between two stools in terms of its loudness. Because you need to drive it to make it work, it's way too loud for home use, and yet it's probably is a bit underpowered for larger gigs On the other hand, for larger professional sized venues, you would mic it and be relying on foldback monitors or even in-ear monitors, so we eventually decided that the best place for this newcomer would either be in the studio, or for gigs where you have monitoring. For all of those uses, though, the tone is fantastic. You can make it darker or brighter with the one amp tone pot but essentially it's the Supro sound you get and all versatility in terms of colour and sound will need to come from your hands, pickups and guitar volume. At this point I need to say, as I always do, that Jimmy Page sounds like Jimmy Page because he is Jimmy Page. This amp will help get you a long way towards his sound (especially with a Telecaster, as used on Led Zeppelin 1) but the 'magick' is ultimately in the man's fingers.

This is really a purist's amp. It's a plug and go offering that does exactly what you'd hope it would, rather than trying to be all things to all players. Having said which, it is also capable of clean, jangly sounds too, which is certainly not something to be sneezed at and reminds us that Fender hasn't entirely cornered that particular market. But, really, what most purchasers will be after with this one is that vintage Page sound - and, given my caveats, that's what you'll get it.  It's also selling at a very fair price for a valve/tube amp.

This is the third Supro amp I have looked at for GI and each one has impressed me, with its has own character.  If you like to plug in, turn up, and play (and who doesn't?) then the Black Magick 1695T could well be for you.