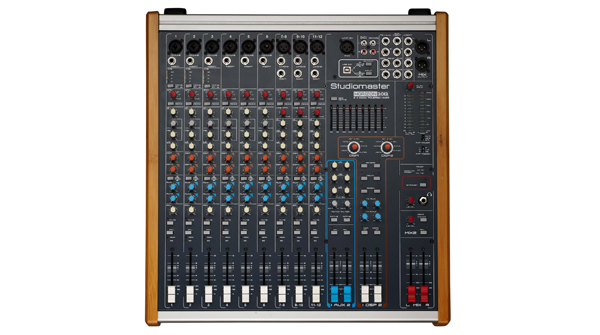 Since the mid-1970s the UK's Studiomaster has been producing hard working, no nonsense PA gear for working musicians. New this year is an incredibly light and compact 12 input mixer boasting a powerful 1,000 Watts per side output from a pair of digital amps. Could this be a perfect powered mixer for small-medium sized gigs? Tim Slater seems to think so.

Launched earlier this year, the Studiomaster Horizon 2012 is an all-in-one mixing desk that offers 2,000 Watts of power, a small but useful selection of built-in effects divided between a pair of independent processors and 12 inputs that are divided between six individual channels and three stereo channels. It comes from a British manufacturer (well, a British design company - as with almost everything these days, the manufacturing is undertaken in China) that has been around a long while now and has carved out a niche as a key supplier to the hard gigging 'working musos' market. It's a tough clientele to cater for. The gear has to perform night after night and prices have to be cut to the bone. Despite that, Studiomaster has clung on and is now even expanding. Recently, it announced expanded operations around the world, with a new set-up in the USA which means American and Canadian musicians who may not have seen much Studiomaster before, soon will.

The Horizon offers just about the ideal specification for the small gig powered mixer and has probably been designed with products like the Dynacord Powermate series in mind. The channel compliment makes perfect sense because it takes into account the maximum amount of inputs that are generally required by the average semi-pro working band: the six mono channels will easily accommodate three vocals, guitar, keys and bass, while the three stereo inputs are ideally for amplifying a bass drum, snare and overhead for the drum kit.

The Horizon desk features a comprehensive features set but it is very much geared towards the needs of a working band where the sound engineer is usually either a willing volunteer or press-ganged into doing double duty! It has the capacity to perform some fairly complex functions but it is still a forgiving and user-friendly ‘plug-in-and-go’ desk that lets the user get up and running swiftly.

Build-quality wise, the Horizon has an aluminium frame (with bamboo end caps, no less!) which feels very light and yet strong. OK, plasticky knobs and 60 mm faders suggest that this desk is built to a price but it nevertheless feels very sturdy. The built-in fan automatically adjusts its speed depending on how hard the desk is being driven, which helps to save vital power. There is also +48 volt phantom power capability for condenser microphones, a socket for a gooseneck lamp (included) and strip lighting to help the band’s nominated sound engineer find their way around the controls. All in all, it's hard to think of anything that could have been included in the price that hasn't been.

There are some handy extras, too. Channels 1-3 feature switchable built-in optical compressors, a feature directly borrowed from Studiomaster’s 19-inch rack mount Vocal management System (VMS) processor. The compression ratios are preset and cannot be adjusted but this is probably sensible as they might otherwise cause more confusion if the user is unfamiliar with compression and how it works. In this instance the channel compression is present to help smooth-out a vocal or other sound source, eliminating peaks that might cause distortion or possibly damage low powered speakers. The compression doesn’t change the sound of the input signal but it is pretty powerful and clamps down fairly hard; so hard in fact that it is virtually impossible to overload the desk with the compression on.

Each of the six individual mono channels features a choice of combi-jack and standard quarter-inch jack inputs. The controls include a three band EQ with Lo, Mid & Hi rotary controls, plus an extra parametric mid-range sweep between 100Hz and 8Khz. This control is useful for adjusting the channels EQ curve to allow for, say, the difference in frequencies between a male and female vocal or even to help curb a mic stand from amplifying the rumble you sometimes get from boomy-sounding hollow stages.

Dual DSP controls select between one of the two built-in FX processors, the advantage being that different effects parameters can be assigned to separate channels if, for example, the lead vocalist prefers delay on their vocal whilst separate channels with BV’s (backing vocal) can choose a different effects patch so as not to clash with the lead vocal. The DSP's lack of menus and programming feels good, there is no fear that favourite settings will be lost. All the user need do is twist a parameter knob to find the effects patch that they want and set how much DSP they want in their mix with the channel DSP knob. Easy.

Dual rotary Aux controls on each channel strip are linked to a Pre-Post switch that re-configures the Aux sends to be either pre or post the main channel faders. Routing the signal pre-fade assigns the mixers own independent Auxiliary 1 & 2 master faders to control the aux levels, useful when the auxiliary sends are driving separate monitors. Post fade is sometimes used to set a balance between the dry signal sent to an external FX processor and the wet signal routed back into the mixer via the FX, useful if you want to add extra compression on the non-VMS channels for example. A pan pot assigns the signal to either the left or right speaker outputs. The Mute switch isolates the channel from the main output whilst the PFL switch allows the sound engineer to set the correct channel gain (using the tried and tested ‘One Two!’ down the mic!) via the headphone jack, so no vocals being audible over the PA!

The right hand side of the desk contains the master sections for the DSPs, Auxiliaries and the main L & R output faders. The dual DSP share identical effects types and parameters but the dual processors allow different effects to be assigned to separate channels rather than one global effects setting. Parameters are chosen and adjusted via a dedicated rotary control for each processor, with switches that toggle between reverb or delay-based patches. In delay mode a Regen knob adjusts the amount of delay feedback (repeats) between a mild ambient wash or infinite repeats, allowing a creative sound engineer plenty of scope to use the Regen knob to create long delays that hang in the air at the end of a vocal phrase. The effects sound pretty good, maybe in isolation there is some slight graininess to the processing but in the context of a live band mix and I seriously doubt that anyone would notice.

Likewise, the 9-band graphic EQ makes an audible thump when switched on and when active the Graphic also amplified a noticeable increase in hiss, which puts into perspective how quiet the Horizon desk is when the EQ is switched off.

The Aux master section offers a three-band EQ and notch filters on either channel that can be used to isolate and remove offending frequencies that might be causing persistent or annoying feedback problems in the monitors, with AFL switches that allow monitoring of the signal at the Aux output.

A power limit switch adjusts the amp’s output between three presets: 100%, 40% & 15%, which is another helpful way of guaranteeing that you won’t blow your speakers when circumstances such as a low-key gig dictate demand lower output speakers as opposed to a full range PA. Bigger gigs or setups can be catered for with the desk’s Amp Assign switch that reconfigures the power amplifiers between three presets; the desk can operate using standard Left & Right outputs or else the amps can be split so that one half runs the main PA while the other amp powers a monitor system. Finally the amps can be routed to the Aux 1 and Aux 2 outputs, effectively transforming the Horizon into a dedicated monitor mixer. Just about everything seems to have been thought of, from the gooseneck mic to a USB 2.0 connector

All in, the Horizon balances in a very comprehensive features set with a user-friendly design. Street prices will make this desk feel like a real bargain. This desk has been described elsewhere as a ‘Gig-in-a-Box’ and we wouldn't disagree: just add some speakers and the band and away you go. For the typical working band who want a sophisticated and capable mixing desk that doesn’t require a degree in sound engineering to use, this has to be right at the top of 'ones to audition' list.