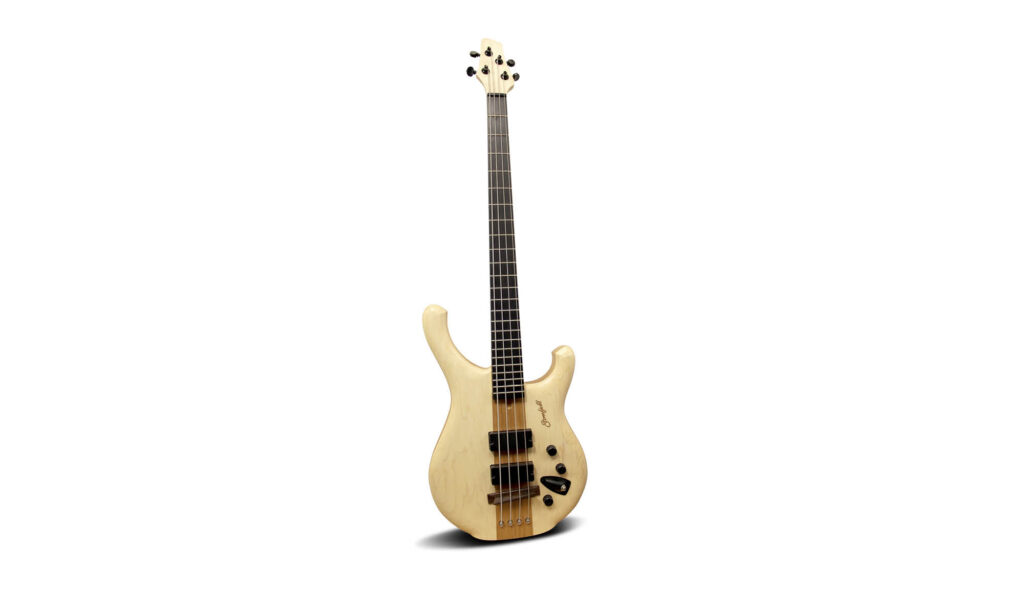 On this instrument, I really like the Ebony tuning buttons, certainly reminiscent of my Faith acoustic guitar.

A growing company trying something different.

Its unique design may not be for everyone

A little on heavy side

Another newcomer to Guitar Interactive Magazine's review department, not only hoping to demonstrate flair and creativity in design, but also a great instrument to play. Dan Veall talks us through the Stonefield F Series

Tomm Stanley, “guitar tinkerer” turned helmsman of Stonefield has a new Bass model that is soon to be released in 2018, the Stonefield F Series. For those less familiar with the brand, Tomm has an interesting headless bass design using a patented bridge assembly which seems interesting. Hopefully, we’ll get a closer look at that as the next round of trade shows come about. I also see that another new design, the ‘G series’ is also in the making at the time of writing.

I can imagine that in this crowded world of guitar companies it can be really difficult to come up with something new and fresh. Many companies maybe lean towards the tried and tested, guaranteeing sales if at the expense of creativity. The other route, of course, is a fine line between innovation and taste or the not so on both counts. Reminiscent of the Japanese copy designs I recall from yesteryear, there’s a quirky design element to the template and understandably being a prototype a certain ‘unfinished’ air about it, which of course we are taking into account here and thus I will be intrigued to see when the final instrument is revealed! Exciting to see something new take shape isn’t it?

The instrument we have been sent has come via a highly skilled factory of luthiers in India that Tomm visited to build this prototype, it features an Alder body with a Maple cap, which in itself is a great choice of tone woods. However, the production models will get an Indian Cedar ‘core’ with either the previously mentioned Maple top or Walnut as an alternative which I expect will look nice.

In the video you’ll get to hear this passive bass, I’ll review the possible purchase options I have been sent directly here which include:

Either a 42mm or 45mm nut width and the option of either a 19mm or 16mm string spacing at the bridge, which is great as I’ve always been a fan of closer string spacings. You only have to see my exemplary Shuker basses to spot that one! 🙂

Along with the custom options, the standard appointments include 24 nickel steel frets, a three-piece laminate Maple neck, Ebony nut and passive OEM pickups. Where Stonefield divert attention from the ‘norm’ is where the division in tastes maybe appear. On this instrument, I really like the Ebony tuning buttons, certainly reminiscent of my Faith acoustic guitar. But I am unsure why maybe such small buttons were chosen for an electric bass. I found them a little difficult to turn. A youngster I think would have trouble. The ebony is lovely; I’d like to see that being a ‘bigger feature’.

Round the rear of the instrument, as you will also see in my video, there is a rather cool channel through the middle of the bass. That’s a nice touch which I suspect may shave a little bit off the overall weight of the bass too.

The bridge assembly is more akin to acoustic guitars and is made from Ebony. The action it appears can be adjusted using a pair of thumbwheels for on the fly adjustments. A clever ‘tool-less’ adjustment that works in a similar way to an acoustic guitar I used to have as a kid, but the knurled adjusters on that were a bit on the small side and thus still needed a screwdriver. Hopefully, this will improve ease of adjustment should you ever need to tweak it.

A personal ‘taste option’ for me I have to say would be to drop the bright red protruding jack socket plate. On some of the other models, it and some of the bridge hardware is bright blue. For me, it jars against the natural wood everywhere else. Maybe if the bass was in gloss sparkle paint with the futuristic look, it might sit better to my eye. I think I’d like to see a recessed side entry in the body wood itself, which would look really tasteful. My other quibble is that I find the jack socket in the way of the control knobs and thus would shift it out to the side. With so much effort having gone in to design the instrument, those touches like hiding leads out of the way might just be the jewel in the crown.

The prototype is so new that the custom Stonefield cases needed to fit this instrument hadn’t been completed so we didn’t have one to show you, but they will be available with the final design.

Weighing in at 6Kg, the bass balances on the knee and feels substantial. Again, it’d be interesting to see how the completed instruments compare. Maybe if you get a chance to try these out you could share your thoughts!

Indian Cedar Body With Choice of Maple or Walnut Top 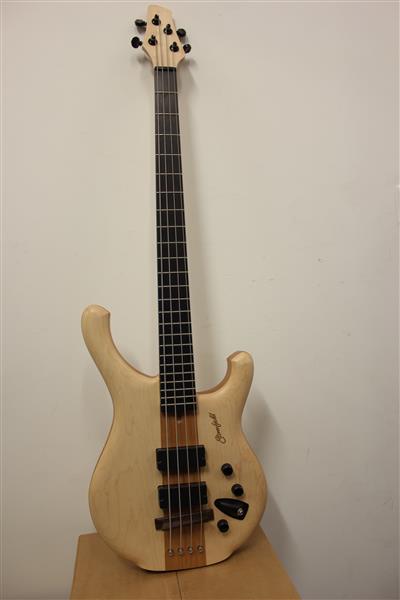 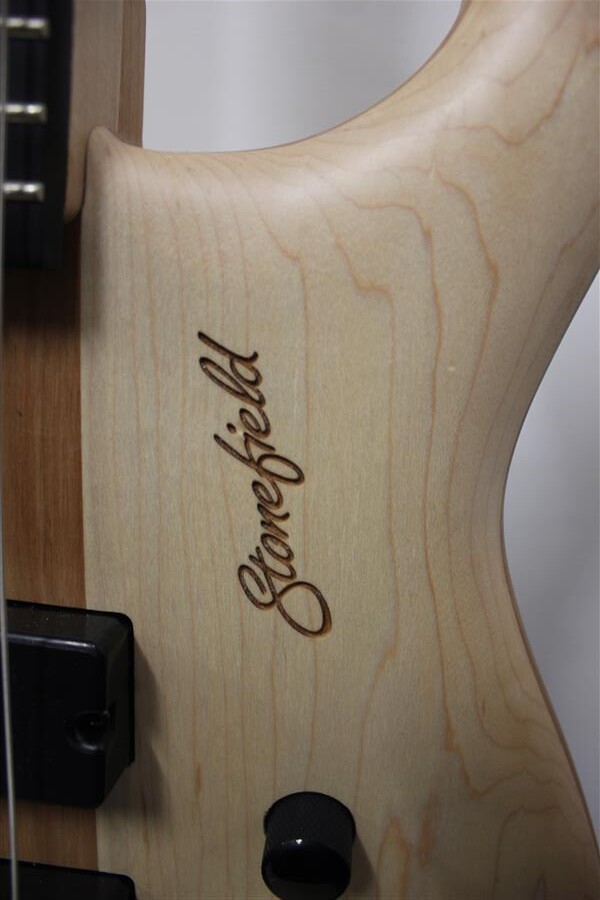