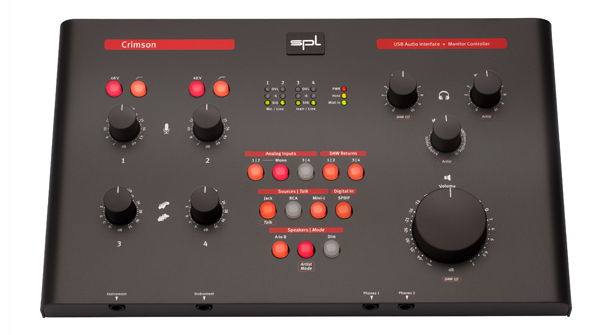 The SPL Crimson is a German manufactured USB2 interface which can be used with Windows, Mac, and iPad with an Apple Camera Adapter kit. The low-profile desktop unit is metal-cased and it feels heavy enough that I actually weighed it; at just over 2.8kg (just over six pounds) you might want to think twice about throwing it in a bag with your iPad, but it’s pretty certain to stay put on your desktop even with a full set of leads plugged into it.

There are a pair of discrete transistor mic pre-amps (up to 60dB gain) plus a pair of high impedance instrument inputs (up to 31 dB), and four line-inputs which trade-off against the mic pres (line 1/2 override mic 1/2) and the instrument-ins (instrument 1/2 override line 3/4). Personally, I’d prefer to be able to leave the line-in connected and manually switch between the options rather than have the switching done just on the socket, but this way probably avoids confusion. Internal sensing is clever enough to figure out if you’re using your line-ins as a pair, and adjusts the mono/stereo monitoring as needed. Mic gain and instrument level gain are set with a top-panel knob for each channel (another quick mention about build quality here, I usually give all the controls on a hardware box a quick wobble to check how solid they are. It’s not foolproof, I’ve tested some units with very high quality pots that are designed so that the shafts do have movement, but all of the knobs on the Crimson are absolutely rock solid - they turn, and nothing else). Overall, the unit is quite large, with lots of room around all the controls and very clear labelling throughout, and the rear-panel even has upside down labels so you can read them when you lean-over the device to plug stuff in. In the centre of the main panel is a set of illuminating buttons that select input and output options.

Each mic channel has its own gain control, phantom power switch and a hi-pass filter (described in the product-overview as a 2nd-order 6dB per octave filter - that’s actually a 1st order filter), it’s gentle, it’s centred at 75Hz and it works fine for reducing unwanted low-end mud without messing-up your sound. Metering is basic; Signal, -6dB and Over. More detailed metering is always nice, but in practice the Crimson is plenty quiet enough that you can set your signal level to just light the -6 indicator on the louder parts, then back it off a bit and know that you’ve got plenty of headroom to play with. Mic inputs are monitored as a left/right pair, but you can switch to mono if you’re using only input one. Instrument inputs have individual gain controls, and the line-inputs are fixed at unity gain - what you put in is what you get out - which is fine so long as you have ample headroom (you do).

As well as the mic/instrument/line inputs, the Crimson also has a set of “Source” inputs on L/R balanced jacks, L/R unbalanced RCA and a stereo 3.5mm jack, for use with external CD players, phones etc. or a talk-back mic. You select which one you want to use with one of the front-panel buttons, and the gain settings of the RCA and mini-jack can be configured using a set of DIP switches on the base of the unit.

Outputs are also selected from the front panel - there are a set of main outs on balanced XLR jacks and an alternative pair on balanced TRS jacks with individual trim pots - with a large front panel knob to set the level in the analogue domain where it should be. A pair of front-edge mounted headphone sockets have their own individual level controls and enough drive to cleanly push anything I connected to them past the point of safe listening if I wanted to. Monitor Mix does the usual job of mixing the input signals with the DAW return signal from the USB connection, and IO is completed with MIDI and SPDIF. Oh - whilst I’m mentioning the USB connection, you don’t get a USB cable in the box - apparently because it’s more eco-friendly for you to use a cable you already own and it lets you choose the right length and quality of cable for your needs. I’ll let you decide what you think about that.

The Crimson acts as a good quality but basic analogue monitor controller - it’s quiet and clean, and you have a -20dB DIM switch, but no mono or mute features that you might find on a dedicated unit.

Lurking at the bottom of the I/O selection buttons is one marked “Artist Mode”. The idea here is that you will typically want a slightly different set-up when you have an engineer and an artist working together. You set-up your DAW so that the main mix is on outputs 1/2, directed to Headphones 1 and Speakers A. The artist cue mix goes to Headphones 2 and Speakers B (which can be used as a line-out), along with talkback if you’re using it. The engineer can listen to the artist mix by switching off Artist Mode, and the artist can hear the main mix by pressing the A to B switch on the front panel. It’s a neat way of working with cues without having to rely on some sort of software routing matrix, and once you get your head round what it’s doing, it’s simple and intuitive to use.

The SPL Crimson is a bit different to most interfaces that I’ve reviewed in that it feels and works like something from an old-style studio - and I mean that as a compliment. It sounds great, the inputs are quiet and clean with plenty of gain, the outputs have plenty of level and the switching is clever and simple to use. It also functions well as a basic (analogue only - no SPDIF) signal router and monitor controller without needing to be attached to a computer.

All in all, this is a very solidly made and great sounding USB Audio interface and Monitor Controller with a slightly unusual feature set.