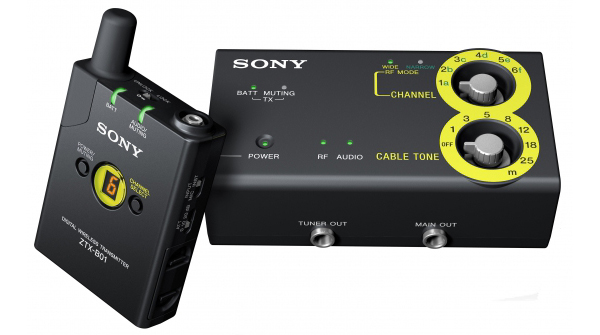 Everything seems to be wireless these days and the technology has developed to the point where many of us begrudge using any piece of technology that requires a physical cable to be plugged in to it. Cables prevent us from moving around freely, they look ugly and can break all too often after being tripped over for the twentieth time. Guitarists and bassists though, seem to have faithfully stuck with cables, presumably for two reasons - cost and tone. There's no doubt about it, wireless systems are expensive, often many times the price of a whole raft of physical cables and the perception is that they don't sound as good as a high quality traditional cable set-up. However, for those wanting the ultimate in freedom on stage or in the studio a wireless system is a must and Sony's new DWZ-B30GB is designed specifically as a package to appeal to all you guitar and bass players out there.

In case you only really associate Sony with domestic Hi-Fi and TV gear, it's worth remembering that the company has a fantastic pedigree in Pro Audio equipment and was one of the pioneers of high-end professional wireless mic systems, its first VHF rig setting standards as far back as 1972. It also has huge experience with digital products and, clearly, has research and technology resources behind it that others can only dream of. Looking to take on some pretty strong competitors in this market, like Line 6 and Samson, Sony has not just thrown its technological expertise at this product but has priced its sturdy, metal-clad, offering against similarly priced rivals.

The DWZ-B30GB set is composed of a traditional transmitter and receiver, in this case the ZTX-B01 and ZRX-C30 respectively. The ZTX-B01 transmitter is the aforementioned small, solidly built metal unit that feels reassuringly weighty in the hand but not bulky or obtrusive once clipped onto a guitar strap. The design is compact but easy to use and transmits a very high quality 24bit Linear PCM signal at 48Khz with a wide frequency band of 10Hz to 22kHz, meaning none of your signal is lost. 24bit/48kHz is better than CD quality, so the signal is identical to that produced through a standard cable and there is no compression going on at all.

The ZTX can transmit across six channels, allowing you to find the optimal signal without interference or noise. A short, screw-in, high quality jack cable is supplied for connection to your guitar and the impedance can be switched between mic or instrument level if required, matching the unit to various signal strengths. An attenuation switch is located on the side with up to -20db of attenuation available and a small mute switch on the front allows for quick muting on stage. Two AA batteries are required to power to B01 unit and offer up to eight hours of continuous use - more than enough for a gig or three. Battery health and Audio/Muting LEDs give an indication of battery life and signal strength and complete a very well designed and built transmitter.

The ZRX-C30 receiver is a slightly lighter unit and whilst still made from metal, feels a bit cheaper and more plasticky to touch. Build quality is still very good but not quite up to par with the transmitter. This is not such a problem as the C30 will be positioned in one place and won't be travelling around the stage with you, so Sony has sensibly put the resources here you need them and, no doubt, kept the price down accordingly.

The design has an internal antenna and as such is much more compact than many of the similar products on the market and sports a cleaner look overall. A large channel selector dial allows you to choose a channel to match the transmitter and a 'cable tone' dial allows you to add increasing amounts of virtual cable simulating the high end drop-off associated with longer cable runs. This effect works very well and adds no degradation to the signal other than rolling off some higher frequencies as expected.

A main output and secondary Tuner/Aux output are provided along with a balanced XLR out if required. Power can be supplied in a number of ways from a 9v battery to 12v, 9v DC power options from pedal boards or wall warts. USB ports are also provided on both units for firmware updates and possible powering options, although strangely these aren't mentioned in the manual, or on Sony's website so we can only make assumptions about their use. Muting can also be achieved from the receiver via the power/muting switch and both units work in both wide band and narrow band modes allowing you to reduce interference with other radio units on stage.

In use we managed to get around 40m away from the receiver with a thick studio wall in the way before the signal became poor. With a direct line of reception (no walls in the way!) Sony claim a distance of up to 60m can be achieved and that should cover all those stadium gigs you'll be doing no problem! We did direct comparisons between my high quality 10m cable and the wireless system and could hear no difference at all running into our studio amp. 24bit/48kHz Linear PCM is the same uncompressed specification used by high-end home cinema hardware and those guys are even more obsessive than us guitar players about their sound!

As you'd expect, this is 'just' the guitar/bass version of a whole new system from Sony, which includes a mic version and more besides. If you're after a wireless receiver this one should be high up your list - it's priced very competitively, sports very high build quality, looks fabulous, is compact and lightweight with great audio specifications and the backing of a giant name with shedloads of technology behind it. Well worth checking-out!