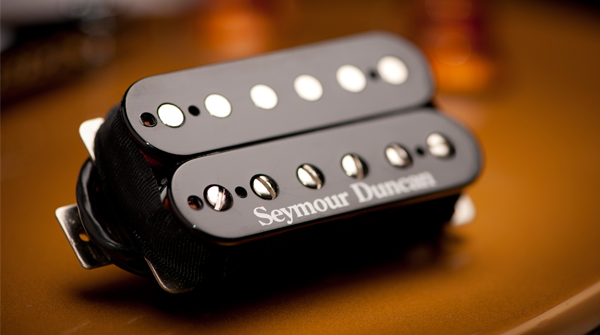 So, the story behind these pickups begins way back before the development of the now legendary Seymour Duncan company, when Seymour himself was a young American living in London. Back in the day, he would often be found doing work for his fellow guitar slingers, who formed part of the London music scene. One of these guitarists had approached Seymour to do a re-wind on a set of PAFs he had which were to be fitted back into his Les Paul. Seymour completed the work for him and, aided by his new and improved pickups, created an instantly recognisable Rock and Roll sound. This guitarist then went on to become one of the most influential guitarists in music history. Ever meticulous with his work, Seymour kept his notes and was able to recreate the exact pickups responsible for the sound that blasted through speakers the world over.  The 'Whole Lotta Humbucker' was born. The question remains the same, though: will this pickup offer a stairway to great tone or will they just leave you feeling dazed and confused? Why not name the guitarist in question? Presumably for endorsement reasons. Let's take a closer look, anyway.

At the heart of these humbuckers lie Alnico 5 magnets, which, contrary to the more modern approach, are sand cast and have very rough surfaces. Seymour himself is quoted as saying: "I liked to rewind the pickups with 42-gauge plain-enamel wire. I'd also insert sand-cast Alnico magnets with a better-balanced magnetic field, which made the B and high E sound as powerful as the other strings. This modified pickup had more output and a higher frequency response."  The bridge pickup is most definitely hotter than vintage with 8.78k DC resistance and the neck pickup is not too far off that coming in at 8.20k.

Both pickups have been wound using Seymour Duncan's unique wind pattern and, of course, no pickup purporting to be vintage would be complete without the use of plain enamel wire. Both pickups have small mounting legs, which mean that they are able to be fitted to a wide variety of guitars, and also feature four-conductor wire on each pickup, with push/pull pots or mini-switches for complete control over the set-up and both are available either in uncovered black bobbins or nickel covers.

For the purposes of this review we needed a guitar to test them, so it was back to the Hagstrom Swede Ultra, which has become our testbed for humbuckers. I was instantly impressed with the sound of these pickups. I'm always somewhat sceptical when companies are keen to push the 'vintage and modern' approach, as it's not an easy balance to  strike, but I most definitely felt that this was accomplished with these pickups. They felt great to play, always tracking playing dynamics really well and they certainly brought the best out of our Hagstrom. Harmonics were clear and precise and in higher gain territory the clarity was exceptional. They also added a very subtle and very natural sounding compression to the tone and pushed the sound of the amp beautifully, offering lots of sustain in the process.

I wouldn't hesitate to recommend these new Duncans. Although they are clearly steeped in that classic Rock tone we all know and love, I feel that they are versatile enough handle a variety of different playing styles. They aren't cheap, but they are very, very good.