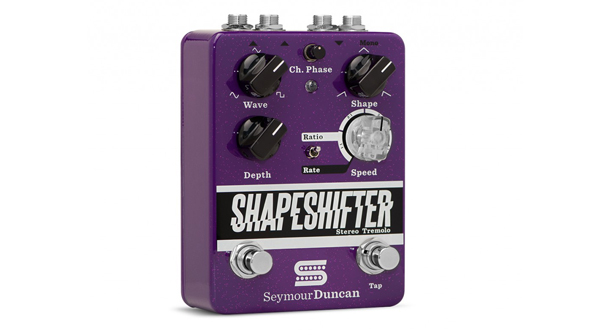 Seymour Duncan may have been late coming to the stomp box party, but the company never does things by halves and we've seen a steady flow of top notch FX coming from the Californian tone master over the past year or so. But tremolo pedals are famously tricky to get right. Michael Casswell finds out if this newcomer is a step too far.

We all love a good tremolo effect. It's one of those timeless effects that doesn't seem to date nor fall out of fashion. There are many trem pedals on the market to choose from but surely this Seymour Duncan Shape Shifter has to be the most comprehensive and versatile available? If it isn't, I would be very surprised.

One of the features that sets this pedal apart from the competition is that it gives you complete control over the wave form that forms the basis of a tremolo effects. You can choose from a smooth sine wave, similar to the effect found on popular vintage amps, or a choppier triangle wave or even the on/off pulse of a square wave. The wave control pot gives you complete control of these wave forms plus all the subtle in between wave forms as you move between each one. Usually that would be enough on a standard trem pedal, but the shape function allows for variation of the tremolo rise and form time as well, which is basically how fast or slow the volume increases or decreases. Every tremolo pedal comes with a depth pot and this is no exception. The depth pot, in case you don't know, is simply how much of the effect do you want to hear. The combination of wave, shape and depth give a never ending choice of great trem effects that can range from a polite shimmer to a full on helicopter rotor sound. You could argue that for some, the range and combination of sounds you can get may be a bit complex to take on board, but surely it's better to have the options rather than not, and the more you live with the pedal the easier it would be to dial in the sounds you hear in your head.

The pedal also gives you a versatile tap tempo foot switch function. The onboard mini toggle switch gives you two tap tempo options. In rate mode, you simply get the tempo you tap in with your foot, but in ration mode, the tempo you tap in gets multiplied with the options 1-1,2-1,3-1,4-1. This is a great tool because tapping in super fast shimmer effects is pretty impossible with your foot, as is a 3-1 triplet, but the ratio mode takes care of this and is very cool addition.

There is more. As good as this pedal sounds in mono, in stereo it will open a whole new world of sonic greatness. You can go mono in stereo out, or stereo in stereo out, so with two amps, all sorts of pan trem effects can really add to the recipe. This can be fine-tuned with the small channel phase pot at the top centre of the pedal. This will control the sweep and depth of stereo you get when using the stereo function.

With a true bypass analogue signal path and pulsating blue light telling you the time that it is set to, the Seymour Duncan Shape Shifter really has all bases covered. It is also just as good for use with keyboards and acoustic instruments as it is with us electric guitarists. The signal to noise ratio is superb and it's really quiet in operation.

Some effects you need to use sparingly, otherwise they lose their impact. Imagine you are playing an hour set, but you have a flanger pedal permanently on. How tiresome and annoying would that become for your other band members and the audience? Very would be the answer! It would also be the same with a tremolo effect. Used sparingly it's a very cool colour to a guitar sound, but over used, it can lose its mojo. So bear that in mind with this Shape Shifter, which is a truly great sounding and versatile tool when used tastefully and sparingly. I have a few industry standard trem pedals, but this Shape Shifter is in another league.