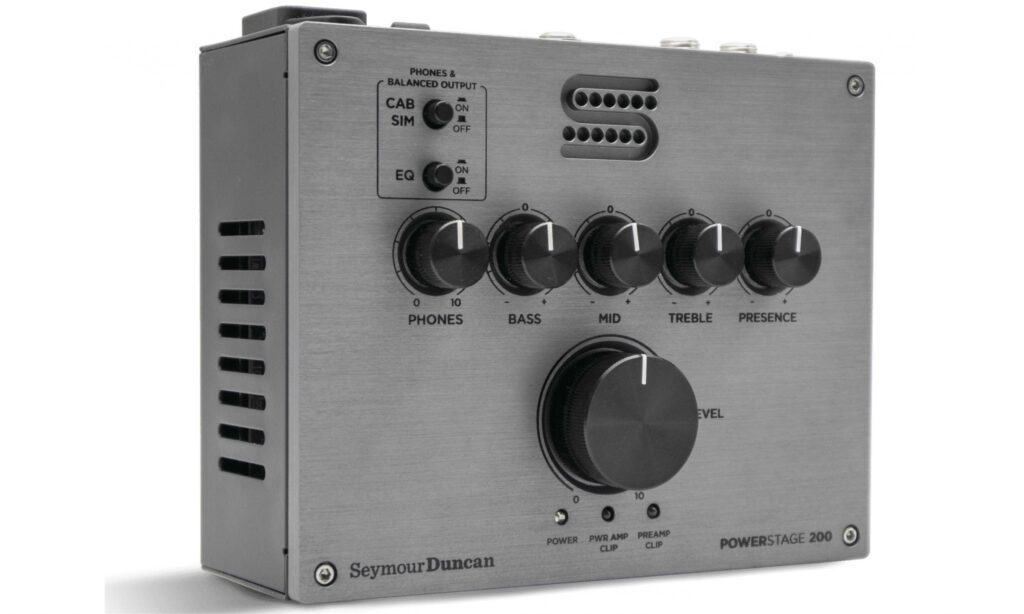 Engineered to attain the best tone and performance from your pedal-based electric guitar rig, Seymour Duncan's PowerStage 200 is a miniature power amplifier that is small enough to fit right on your pedalboard. Complete with built-in speaker cabinet emulation so you can record directly into your DAW, the Seymour Duncan PowerStage 200 is a powerful solution both on stage and in the studio. Nick Jennison reviews.

Guitar players are famously conservative when it comes to gear. Keyboard players long ago abandoned dragging B3s with Leslie cabinets around in favour of sleek red Nords and a laptop. But in spite of how great modelling technology is these days, guitarists just won't let go of their expensive, heavy, fragile valve amplifiers.

The reason? The guitar and amplifier are not separate entities, but rather a system. The air being pushed by the amplifier interacts with the guitar in a way that stage monitors just can't recreate. If you've ever heard the familiar refrain that "modellers sound great but don't *feel* right", this what it means.

Enter Seymour Duncan and the Powerstage 200, (Sitting squarely in the middle of their Powerstage line) this compact and brutally powerful unit is small enough to mount directly to your pedalboard, and pumps out 200w of power to the speaker cabinet of your choice. It shares a similar form factor with the Powerstage 170, but with a few clever features that it's little sibling lacks.

There are a single master volume knob and a four-band EQ (bass, mid, treble and presence) for sculpting your tone. If you're using a modeller, you can leave this flat and tweak from there, but if you're using the Powerstage 200 as a clean platform for your drive pedals then a slight midrange scoop puts the Powerstage well in the ballpark of a traditional valve amplifier. The EQ is extremely powerful, so you'll have no trouble matching your tone to whatever cab you plug into.

Speaking of cabs, it's worth noting that 200w of output is a LOT of power. If you're intending on pushing this thing up to its limit, you're probably going to need a 4x12, or if you're going to use a smaller cab then you'll want some seriously powerful speakers (like a Celestion Copperback). That said, you're highly unlikely to push the Powerstage 200 anywhere near its limit without incurring the wrath of even the most tolerant sound engineer - this thing is barbarically powerful!

Speaking of sound engineers, the Powerstage 200 also features a balanced XLR output, complete with a cab sim. You can defeat the internal cab sim at the press of a button if you'd rather use your favourite IR pedal instead (or if you're running IRs in your modeller and powering an FRFR cab), but the built-in sim sounds excellent. There's also a headphone output with its own level for silent practice, or for running IEMs on stage. There's also a switch that defeats the EQ on the DI and headphone amps, which leaves you free to tweak away and get your stage sound just right without affecting the signal you're sending to FOH.

Whether you're a modeller user who wants to claw back that elusive "amp feel", or a pedal aficionado who wants to ditch your bulky amp head, the Seymour Duncan Powerstage 200 has got you covered. It's insanely powerful, versatile and offers a ton of tweakability.