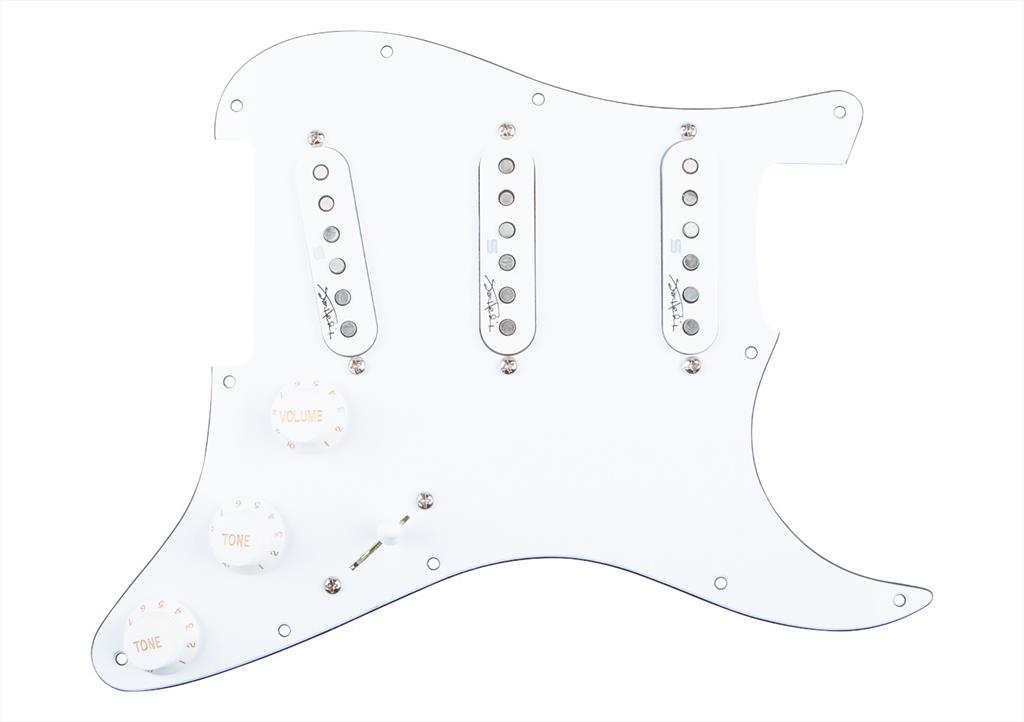 The Hendrix Signature pickups are wound by Seymour to reflect the tone typically used by Jimi at that time, but with a bit more power and melodic tone.

Great tone – suitable for all styles of music
Improved string volume balance due to the reverse stagger magnets
Easy to fit, with just a few solder connections
A prestigious good looking piece of kit!

Guitar Interactive is delighted to welcome one of the world's most respected guitar specialists to our team, the inimitable 'Dr Robert' - Robbie Gladwell! We'll be introducing Robbie in greater style in a future issue, when he's had a chance to get his coat off. But before he did, we were in a hurry to get his opinion of the new Seymour Duncan Jimi Hendrix loaded pickguard so we asked him to get started with that while we moved the office furniture around. Oh, and just to demonstrate how amazingly cool he is, Robbie even shows you how to fit one to your own Strat!

Seymour Duncan is probably the most famous of all the world’s pickup makers. His company makes the largest range of pickups in the world under its own name and supplies many of the major guitar companies with OEM Units, often designed and voiced to their particular requirements.

Readers who missed our interview with Seymour back in GI 26, may not know that he started making pickups in the 1960s because he couldn't get the sound he was looking for from the stock pickups fitted to most guitars in those days.

There were very few manufacturers making custom made pickups at the time, DeArmond being the only company I can think of right now, so you were pretty much stuck with the sound of whatever happened to be fitted on your guitar! In those days it was very difficult to become established making guitars, let alone pickups!

Seymour had a major breakthrough in early 1968 when he got to know probably the most groundbreaking guitarist of the day, if not all time… Jimi Hendrix!

‘On a chilly evening in March of 1968, Jimi Hendrix asked a young Seymour W. Duncan to walk his guitar up onstage. That Strat was loaded with pickups Seymour had made just for Jimi, and that unforgettable night would set in motion Seymour’s future – and his legacy almost five decades later’.

The Hendrix Signature pickups are wound by Seymour to reflect the tone typically used by Jimi at that time, but with a bit more power and melodic tone. The treble pickup has more bite than most mid '60s pickups I've come across, but you must bear in mind that Jimi played right hand guitars strung for a left handed player. This configuration means that the bass side of the treble pickup is now closer to the bridge giving it more bite in the bass and, conversely, a slightly warmer tone to the treble strings. A loaded pickguard version with the bridge pickup angle reversed (the Voodoo route) is also available, but should you decide to go for this style you'd require additional routing on your guitar for it to fit – a job best left for a qualified guitar technician!

The loaded version we have here houses the pickups in a 3-ply white pickguard with a standard-angle bridge pickup route.

So as to capture the essence of Jimi’s tone, each pickup is made with a reverse magnet stagger to reproduce the effect of playing a right-handed guitar upside-down but restrung left-handed. This also has the benefit of reducing the annoying ‘G’ string dominance found in right-hand guitars played conventionally.

The middle pickup has a chimy presence that is perfect for those in-between positions, producing plenty of that classic Strat ‘quack.’

Surprisingly, I found the neck pickup has a much warmer Jazzy sound than I expected, but with no loss of that sweet treble that the Alnico 5 magnets (used for this set) typically give rise to. Switching to this pickup captures that rich warm tone that Jimi used for his melodic hybrid chord style.

Unboxing anything new is always fun, especially when it's something to do with a guitar! The pickguard is well packed in a recyclable cardboard box and contains everything you need except the solder. Having said that, I would have liked to seen a shiny new set of screws to go with it, rather than having to reuse the originals (mine were tarnished and dull) – especially as this is an eleven hole plate and my old one had eight holes.

After removing the pickguard you’ll find a pre-wired jack socket and a set of fitting instructions with a circuit schematic on the reverse side. The instructions are very clear so you should have absolutely no problem following them.

Fitting and soldering the pickguard into place is fairly easy providing you have reasonable soldering skills. A handful of tools will see you through this, but you do require a fairly powerful soldering iron and a supply of multi-core solder.

First you must remove the strings and pickguard. Then unsolder the two leads from the volume control that go to the jack socket. Now unsolder the earth wire that goes to the spring claw. You can put the old pickup assembly and plate to one side and then remove the two screws that secure the jackplate, lift it out and remove the original jack socket ready to fit the new one.

Before you make any solder connections it is essential that you check the new pickguard fits your guitar properly. If not you may have to make some alterations to the body, or even the pickguard in some circumstances. If you do come across a problem it might wise to seek help rather than continue and risk causing damage to either the pickups or the guitar body. In my case I had to drill extra holes to allow for more screws. This is a relatively simple job but you must use a drill bit slightly narrower than the screws and obviously don't drill too deep!

Before you screw the pickguard onto the body you should check that it all functions electrically. Connect the guitar to your amp and the tap each pickup in turn to make sure they work (with the selector switch in the correct position for the pickup you're testing). Don't forget check the function of the volume and tone pots, remembering that only the neck and middle pickups have a dedicated tone control.

Before you replace the strings, now would be a good time clean the body and neck, apply lemon oil to the fingerboard and lightly lubricate the bridge screws. Check all screws (including machine heads) for tightness, being careful not to over-tighten.

Now restring the guitar, then check the intonation and re-set the pickup heights. This I do by holding the strings down at the last fret and measuring the clearance between the top of the pickup pole-piece, to the underside of the strings. You only need to check this on the two ‘E’ strings. Typical measurements would be 2mm clearance on the treble side 4 – 5mm on the bass side for each pickup. Any higher than this and you might get string buzz and false notes (wolf-tones) as you play further up the neck.

I absolutely loved the sound of this set of Hendrix pickups as they suit my playing style perfectly. I particularly loved the bright trebles, achieved without a trace of harshness. The pickup to pickup volume balance is good without resorting to unusual pickup height settings. The warmth and tone of the neck pickup is great, my favourite!

Now all you've got left to do is dig out the Hendrix tabs you've been meaning to play properly and crank up the volume!

Overall our conclusion is that these are exactly what most of us would hope they would be - a fantastic opportunity to get back to that elusive, authentic Hendrix tone but, it has to be said, at a higher price than we would like to have seen - at least here in the UK. If you are pushed for cash (and who isn't?) you can save quite a bit by buying the pickups alone, but it has to be said that the loaded pickguard is a very tempting alternative! 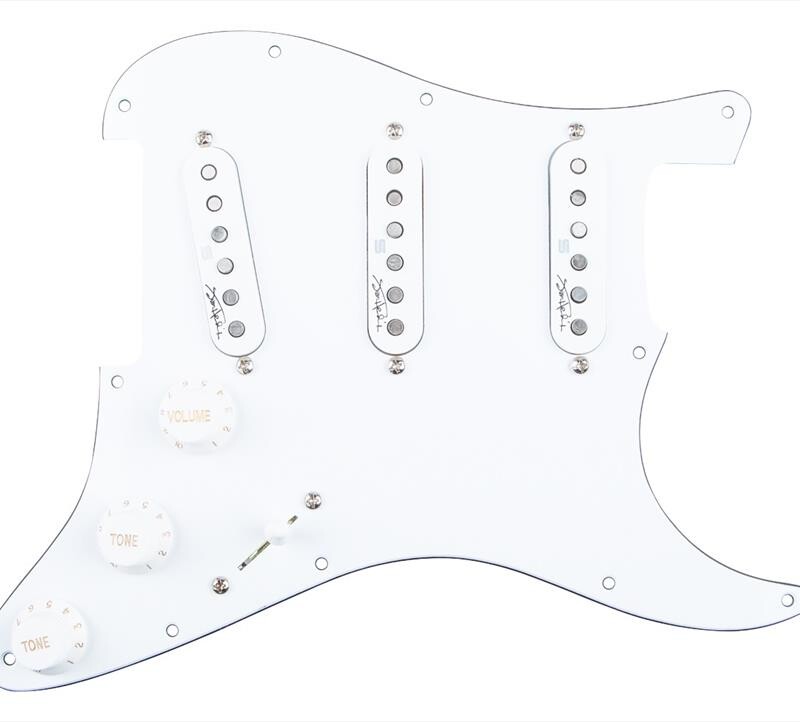