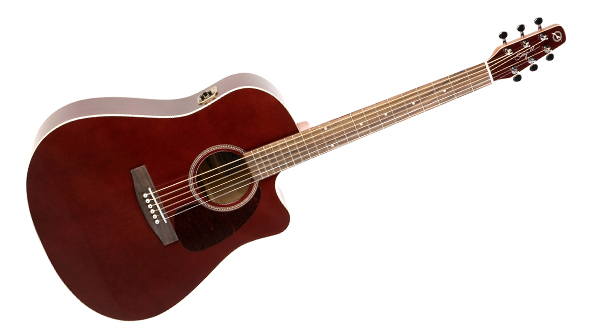 Godin's Seagull brand has been winning serious praise from reviewers both sides of the Atlantic in recent years. These Canadian-built acoustics hail from a land of plentiful timber and highly experienced craftsmen. Rick Graham looks at two models designed to appeal to the demanding electric/acoustic player on a tight budget.

It's now over 30 years since Robert Godin produced the first Seagull acoustic guitars in the village of LaPatrie, Quebec, in Canada. Having already established an impressive reputation for exceptional quality instruments, the concept behind the Seagull brand was to take elements of the best hand crafted guitars and implement those features into a range of instruments that were marketed at a more affordable price bracket. Since then, the Seagull name has won quite a reputation for offering a North American produced guitar made from high quality woods at the prices more associated with imports from the Far East.

For this review, we'll be taking a look at two Seagull guitars from the company's 'Entourage' range: the Entourage Burgundy CW GT QI and the Entourage Rustic, both designed, Seagull says, to appeal to players more familiar with electric guitars.

One of the characteristics of Godin's Seagull and Simon & Patrick models (the company owns both brands) is the concept of using pressure tested tops, as we saw with the Simon & Patrick reviewed way back in issue 6. It's impossible for a reviewer, who only has a short exposure to an individual guitar, to know if this feature makes a lot of difference, but clearly, the manufacturer thinks it's important and it does give you a sense of confidence that, even though this is quite an inexpensive instrument, it has every chance of having a long, fruitful life. And speaking of fruitful, that pressure tested solid cedar top is mated to an unusual choice of woods for the sides and back - Canadian wild cherry.

For no particular reason, we've had a lot of cedar topped guitars in the studio of late (in fact the majority of acoustics reviewed in this issue have sported them). We're not saying it's a trend, but it us nice to see something other than the usually ubiquitous spruce! Cedar tends to be warmer and a bit less 'bangy' than spruce and is a good, traditional choice for a high quality instrument - which this undoubtedly is.

With a simple cream binding, the body features a burgundy custom polished finish which in actual fact is semi-gloss and has an attractive sheen to it.

Playing wise, this Seagull, as does all of this particular range, has a slim nut width, measuring 1.72", and as a consequence the neck is very slim and fast, making it ideal for electric players looking for an acoustic which has easy playability. The neck wood of choice is silver leaf maple and this model has an integrated set neck. The fingerboard is rosewood, as is the bridge and the neck comes fitted with a double function truss rod. I should add that the nut and bridge saddles are both Tusq, which is, again, a professional level choice.

A key feature of this Entourage is a Quantum I pre-amp with onboard tuner. The pre-amp is located on the upper side of the guitar and is a relatively simple affair with bass, treble and volume controls as well as the tuner function. It's none the worse for being simple and is very effective. I'll get to the sound in my summing-up, but for now it's time for the second Seagull we looked at.