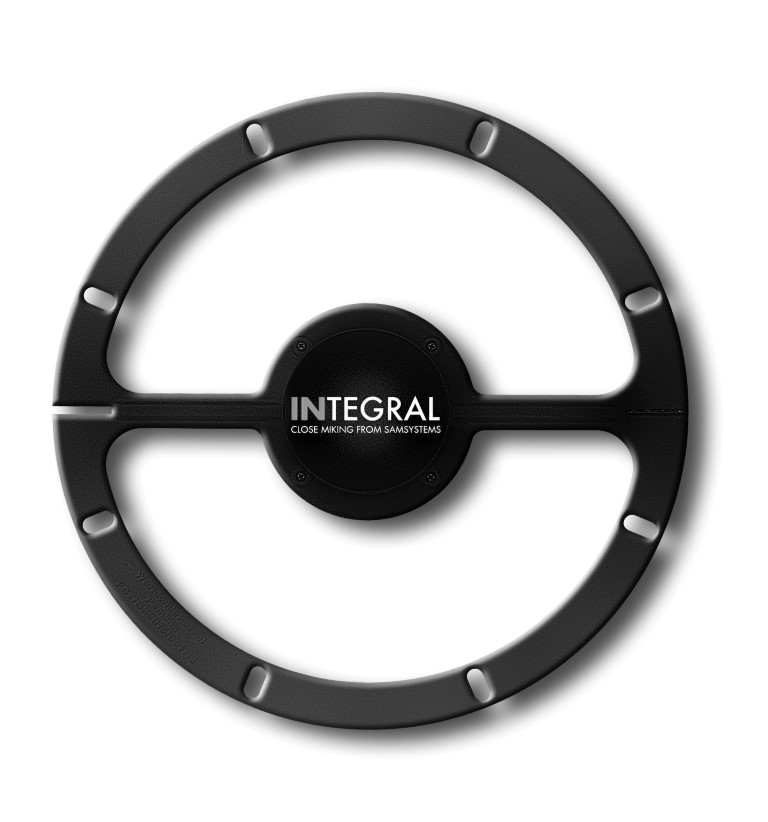 To begin with, the Integral is a lightweight unit that features a high quality super cardioid dynamic microphone with an “Exceptional high/low, full range frequency response” that is designed to deliver a true balanced analogue output to a mixing desk, monitors or front of house PA.

Can't alter the position of the mic

Miking your guitar cab is a problem many leave to their sound engineer. But does that always get you the best sound? New British start-up company SAMSystems has developed an ingenious and cost effective way of delivering the perfect sound every time. Finally, after several years testing on the road with top bands and engineers, the product is ready for launch and GI got there first for a review sample. Lewis Turner assesses the Integral close miking system.

If you’re a gigging/recording guitarist who wishes to use a real amp rather than a multi effects unit straight into the desk, then you'll be familiar with the constant battle that is miking up an amp. Without even getting into mic position you have to consider the space a mic stand and mic take up, or maybe you'll use the old “dangle over the top of the amp” miking technique if stands are in short supply? In either case your sound will normally be in the hands of a sound man, and who knows what type of mic he has with him or if he cares about its placement, that is if he hasn’t already used them all up on the drum kit! Getting consistent mic position is a battle too, one day it sounds great - the next it's just not working for you. Different mics vary as well, so it's very hard to keep continuity. If you have time on your hands in the studio then you can play around with mic placements to find that sweet spot for your particular amp and speaker, but time is often a luxury in those situations, you’re normally just expected to plug in and play with a good sound and that's almost always the case when you're playing live.

A new, small, start-up company, SAMSystems, may well have come up with the answer to all these problems, and when I first read about it my initial thought was. “Why hasn’t this been thought of before!?” The Integral Close Miking System is exactly what it says, a close miking system that does away with the need for a separate mic. You simply install this system inside your amp behind the mesh with the built in mic facing the speaker. It's already set off centre (off axis) slightly to give the warmest tone. Once fitted, you just screw the cover back over it, run the output cable which has an XLR box connected to it, to somewhere accessible on the back of the amp, and you are ready to plug straight into the desk - utter genius! As always, be sure to check out the video to hear this set-up for yourself.

To begin with, the Integral is a lightweight unit that features a high quality super cardioid dynamic microphone with an “Exceptional high/low, full range frequency response” that is designed to deliver a true balanced analogue output to a mixing desk, monitors or front of house PA. If you watch the video review you will notice that I didn’t do an AB test with this system alongside an amp with an SM57 in front of it. SAMSystems was keen to get across that this system isn’t trying to sound like an SM57 or the like, it's a unique mic with its own sound and should be heard/tested/reviewed on its own merits, they said, and I was willing to go along with that.

As well as all the problems with regular miking mentioned earlier, this new system will also minimise overspill and feedback issues, so, really, what's left to worry about. Reliability? SAM says the Integral system has been pressure tested at extreme volumes at the Marshall factory alongside an SM57, and apparently the mic gave out way before the Integral system did. We can't prove that, of course, but one of the reassuring things about this product is the amount of testing and research the manufacturer has done before getting to the point where it was allowed out of captivity. It has been tour-tested with major pro bands, players and engineers to make sure there are no unforeseen issues and we're willing to accept that.

There are currently two size options available - the IM10” and IM12”. Our test model came fitted to a Blackstar HT5 which has a 10” speaker. I simply plugged its XLR straight into our mixing desk with all the EQ's set flat, so the sound you are getting in the video is direct from the system with nothing else interfering. I then faced the speaker away from me in an effort to just hear the tone from our wedge monitors, and what I heard I was very pleased with. The tone was clear and focused with no mud or looseness - it handled both clean and distorted sounds with no problems at all and various levels didn’t cause any issues.

So what about that sound? As you can hear from our test (assuming you are using decent speakers or headphones) it really does have its own unique sound. It offers a fair bit of top end but never gets to the ice pick stage. In fact it actually added more clarity to my sound and enhanced the tone of the humbuckers, especially the neck position, on the guitar I was using. However, while having its own sound, it doesn’t alter the inherent tone of the amp/guitar and, if anything, improved it and added some sparkle.

Impressed, I tried as many different tonal amp and guitar settings as well as a variety of styles and everything just sounded spot on. I really was surprised at just how great it was. When I first had a look at the system I did think “What if I want to move the mic position, for a different sound?” and, in short, you can’t. As mentioned above it's set slightly of centre so you don’t get that sharp tone associated with miking the centre of the cone, but it is true that different amps and speakers have different sweet spots, and you can drastically alter the tone depending on where you place the mic. Integral say they have plans in the pipeline for developing a system that moves, but they also point out that this system can be used alongside an external mic if you need to change the tone. The fact is this system is designed to give you awesome tone in the quickest possible set up time and there is no doubt that it does that exceptionally well.

The SAMSystems Integral forward thinking design at its very best, a product that solves a problem that all gigging guitarists have, but never considered could be fixed! I was so impressed that I ordered a 12” one for my Hot Rod Deluxe. I installed it within 30 minutes and there it sits ready to go at every gig and session. I can turn up, plug in and be confident that my sound is going to be good and I won’t suffer any horrible tone surprises (as long as the PA is good...). Sure it would be cool if you could change the mic position but as a new product this is great, I'm right behind it and will be telling all my guitar buddies to go check it out, you should too!