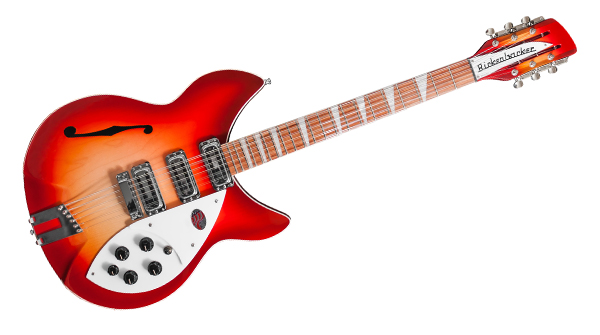 If I had a pound for every time I've heard the phrase, “Man, I would love a Rickenbacker!” then I would probably be able to afford the guitar on review here. Founded for the sole purpose of creating and manufacturing fully electric musical instruments and amplifiers, the Los-Angeles based Electro String Instrument Corporation was founded in 1931. Since then we have seen some of the most famous guitarists ever play Rickenbackers, and that is part of their appeal, alongside the highest of build quality and “that sound”, which has graced so many hits. Apparently, Pete Townshend asked Rickenbacker to reprise and update his own beloved Model 1993 guitar. Rickenbacker did just that, and the result is the 1993 plus 12 string, which is what we are looking at here.

The 1993 Plus is a great looking instrument sticking closely to the traditional Rickenbacker style. There's no mistaking one of these! Unlike a lot of 12-strings, where the machine heads are all jammed together in a row either side of a crowded headstock, or all crammed into a single strip, Rickenbacker uses a clever design feature in order to accommodate all the deluxe vintage retro machine heads. You can see how it works on the accompanying photograph. Needless to say, they all worked perfectly, as you'd expect on a guitar of this price.

The neck is a set-in maple type with a rosewood fingerboard, featuring a 24 3/4” scale with 21 frets. I found the fretboard and shape of the neck very comfortable to play as was the action and spacing between frets. There were no buzzing or tuning issues anywhere on the guitar, and upper fret access was ample thanks to the two large scooped out horns.

The 1993's semi-acoustic body is also maple and that double use of maple helps deliver a definite sound, making it ideal for the jangly, strummy tone that one might look for in a 12-string and which has become the legendary sound from this guitar. Having the f-hole also increases its acoustic volume and natural resonance, while the use of x-bracing inside the body helps to bring out the full, rich and warm sounds Rickenbackers are known for. It's not a light guitar, and as you might expect having a bulky headstock makes things a little unbalanced. Mind you, if you’re used to playing Les-Pauls then this will feel like a piece of polystyrene! Three vintage single coil 'Toaster Top' pickups deliver the tonal goods, with a wide range of pickup selection and configuration, once again all demonstrated on the video. These pickups were great, with the bridge delivering a cutting jangly top end and the neck a nice, deep resonate bottom, with the middle somewhere in between, again as you'd expect. With all the possible variants even the pickiest member of the Tone Police should be able to find a sound they like! A Trapeze tailpiece and six-way split saddle finish everything off.

The finish and attention to detail were absolutely top notch on our example, giving you the feeling that Rickenbacker has gone above and beyond to deliver a top of the range instrument. It's good to see such a fantastic set-up, making the guitar a joy to play straight out of the case.

I have to say that I was a little taken back by the price tag (and we were less than impressed by an exchange rate of $1 for £1, which makes this guitar even more costly in the UK - Ed), and that had the immediate effect of raising my expectations to the highest level, but I wasn't disappointed. This is a fantastic instrument, the build quality alone is a thing of beauty, and it sounds the business. No doubt you are paying a premium for the name, but if you are one of the guys mentioned in my intro who has always wanted one, and you are prepared to stump up the cash, then I say go for it, I'm pretty sure it will be everything you had hoped for. For the rest of us? Well, there are less expensive Rickenbacker 12-string models are in the range but this is, unquestionably 'the real thing'.