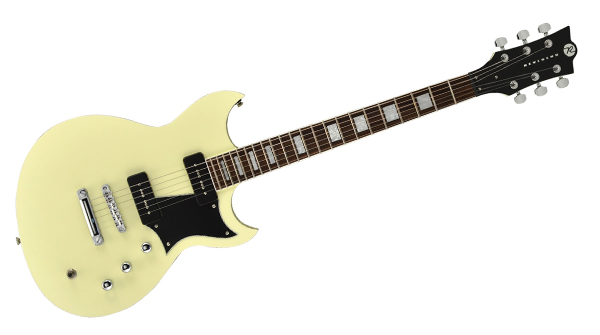 OK - hands up all those readers bored with the same old, same old. Well, well... quite a lot of you it seems! Proving that there's life outside of the mould is the US's fast-growing Reverend company-

fresh out of Detroit and with a distinct edge. And what could be edgier than a Bayonet? We handed one to Michael Casswell and waited for cutting remarks....

The US Reverend company has been around since 1997, founded by Joe Naylor. Joe was big into amp and guitar design, and spent years as a luthier and amp builder, so he definitely knows what works and what guitarists want from their gear. Starting out in a garage at the back of a bicycle shop in East Detroit, Joe's designs for amps, cables pedals and guitars have also won many awards within the industry. He soon collected a small team of enthusiasts about him and Reverend grew and grew. Initially, the guitars were built in the States, but Naylor and his team found building sales beyond their core supporters (and there some fanatical Reverend supporters out there) just wasn't working commercially, so production now comes from Korea. The good news is that this means Reverend prices are kept affordable, without compromising quality. We'd been looking to get our paws on a Reverend for some while and were grateful to be loaned not one but two models (both in this issue) by the UK's sole retailer,Vintage and Modern guitars from Thame, Oxfordshire. Thanks, guys!

OK, so on to the Reverend set-necked Bayonet! We should add that Reverend divides its models into categories like set-necked (ie a glued joint) and 'bolt on'. The Bayonet is one of the set-necked models. The first thing that struck me about this guitar was the colour. It's a matt army green, which is quite a statement and would certainly set you apart! I guess it goes with the name 'Bayonet'. I actually like the fact that this guitar has an actual name, rather than a series of numbers and abbreviations, which so many guitars have nowadays. I can't say I love the colour but I do like the fact that it's different. I do believe you can get this model in black as well, which would probably make it look even meaner. On picking it up, the guitar is a nice light weight and nicely balanced. Unbalanced guitars drive me nuts, which is why I probably don't own a Gibson SG. A guitar should feel part of you on a strap, and not feel like it wants to escape, and the Bayonet feels good, sitting or standing.

The next thing which is out of the norm is the guitar's Railhammer, pick ups which are half rail, half magnet and were designed by founder Joe Naylor. I think this design must be unique, and it's not something I have seen before. They do sound very good indeed. Plenty of output, but with the clarity and sweetness you get from lower output pick ups, so the design works and is not just a gimmick. These would sound great for drop tunings with plenty of gain, but also would be sweet enough for more delicate and dynamic playing. These Railhammer pick ups are available on their own, and are definitely worth checking out if they work for you.

Another cool thing about this guitar, and all Reverend guitars, is that it is made from Korina. This is a wood that seems to have gone out of favour in modern production, but many highly sought-after vintage guitars were made of this wood. It's highly resonant, light in weight, and will give you a real lively response to a guitar, rich in harmonics, no matter what the body shape. I would describe the sound of the Bayonet as lively and resonant - combined with the Railhammer pick ups, it's hard to get a bad sound out of it.

For me, the coolest feature of this guitar is its passive bass roll-off and on pot, which is next to your usual volume and tone. This is subtle but really works. It sort of revoices the pick ups to make things tighter, twangier, brighter and many other words that end in 'er'. For the more experienced player who knows how to work the guitar volume and has a 'touch' to their playing, the bass contour is a nice addition to expand the tones, making this guitar a good studio guitar as well - which is, after all, where subtleties are under the microscope.

The Bayonet also sports some nice touches such as locking machine heads, dual action truss rod for stability (always good for a touring guitarist) an ebony fretboard (no less) and a graphite nut. This guitar played great with no dead spots or choking, and was ready to go straight out of the box.

If I was mean and lacking soul, I might mention that the looks are not for me, so I won't, because I have bags of soul. This guitar certainly is a statement visually and if you are a good player, then the combination of the Bayonet's looks and your playing would be a winner every time. It feels like a tough guitar that doesn't need polishing or worrying about, and that you could leap into the audience with, whilst thrashing out your drop tuned mega heavy riffs. But it will also return some very sweet tones if you are a player that has the sound in their hands. All for a very reasonable price.

Yes, indeed, we liked this one very much! Fabulous price, too for a unique, professional guitar!

Our grateful thanks for Reverend guitar's sole UK stockist, Vintage and Modern in Thame, Oxfordshire, guitars for the loan of this stock model www.vintageandmodernguitars.co.uk