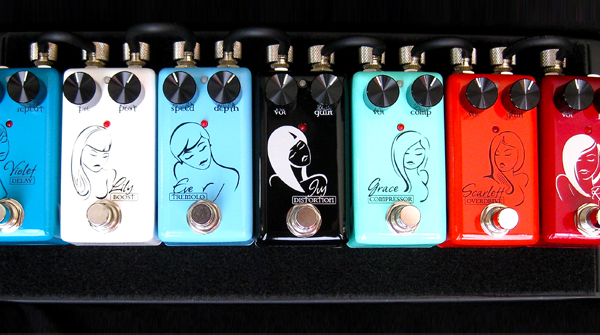 The market is absolutely saturated with pedals nowadays. We guitar players can't get enough of them. No matter how many we own, we will always find a use for one more. I could certainly add to my collection with these Red Witch pedals from New Zealand, which apart from sounding very cool, have some unique features that make them stand out from the norm.

To start with, these pedals are rechargeable. They each have a lithium-ion cell battery, much like that in your laptop or phone. If you connect them up to your 9v power supply and give them a charge of around four hours, you will then get around 120 hours without them being hooked up to anything. As much as the industry has taken to the new breed of half size pedals, none of them carry a battery and have to live in your board hooked up to the 9v supply. Red Witch has solved this compromise with their rechargeable status, giving you the choice of throwing them in your over night bag knowing they will be ready to go when needed, or leaving them as per usual Velcroed to your board connected to your 9v supply. With some of the fly-then-gig shows I do, this feature becomes a very big selling point to me.

Another nice thought is that the in and out sockets are at the top of the pedals, meaning if they are charged, you can butt them right up next to each other to create a very small footprint on a small portable board. Again, when space and weight is a concern if you sometimes fly to gigs, then this becomes another selling point to me. Fortunately they also sound great!

These pedals are part of the Seven sisters range. We have four of them here, namely, Lily the boost, Ruby the fuzz, Scarlett the overdrive and Ivy the distortion.

Lily the boost performs her job really well. She can give a gentle volume lift acting like a clean boost, or on higher settings add a little grit and gain that your average tube amp will love. Boost pedals are also great for stacking into overdrive pedals, giving you more from them too. In the effects loop of a dull amp they will lift the volume and tone, or in the front of an amp on the edge, they get things cooking nicely. If your pick ups lack output or character, then a boost pedal is the answer. Lily certainly does all of these tasks really well and is certainly up there as one of my favourites in this review.

Ruby Fuzz is one of the more defined and musical sounding fuzz pedals I have tried. I'm not a fan of Fuzz, but this one did sound good and didn't just end up sounding a quirky mess like many fuzzes do. I did find Ruby lacked some boosting qualities and it wasn't until you were on some of the highest settings that there was an increased volume to your regular sound. The Ruby Fuzz also kept the attack at the front end of the note when many other fuzz pedals would simply compress into a mush. So although I am not a Fuzz user, I wouldn't say no to Ruby.

Scarlett Overdrive was my other favourite from the bunch. It was voiced very nicely and gave a thick organic tone with plenty of volume and plenty of drive. It keeps the character of your guitar and gives a nice front of the note definition. On the review we were going into a clean sounding Supro combo, which probably isn't the best amp to show Scarlett off to her best. Overdrives really shine when they hit an amp that is set to some crunch and break up. Even so, Scarlett still sounded good going into the little clean Supro, and I can tell this would be killer pedal in front of my Marshalls!

Ivy Distortion gives you a nicely voiced Metal tone that is thick and musical and doesn't ever sound fizzy as some distortions can. Again, I can hear that this pedal when backed down would also act in the same way as an overdrive pedal when combined with a good on the edge tube amp. But it is designed to rock, with bags of gain and drive. Your character and sweetness would come from what guitar and amp you use and your touch as a player, otherwise Ivy is another good distortion pedal.