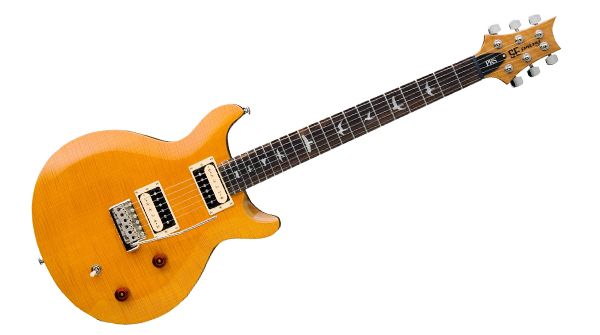 Think PRS and you think Santana - the association is legendary. Sadly, think PRS and you also think high prices but that association needn't be taken for granted as since 2001 PRS have sold a range of Korean-made guitars that take the renowned quality of the brand and place it within reach of the average guitar buyer. The PRS SE Santana is the company's solution for those people who always wanted a Santana signature model as close as possible to the original, but couldn't afford the high-end model that the man himself uses. In-fact Santana had a significant hand in the production of the original SE series of guitars, the first of which was a Santana SE model. This guitar is an evolution of that original version released back in 2001.

The review model sent to us by PRS had a reassuringly heavy mahogany body with a lovely flame maple veneer (not on the opaque black model), mahogany neck, rosewood fretboard with 22 frets and 'Old School' Birds Inlays, nickel hardware, PRS SE 245 Zebra colour humbuckers in the bridge and neck positions, PRS designed tremolo and a three-way position switch with volume and tone controls. The body is the classic Santana shape and looks superb with its flame maple veneer. It's not a top grade PRS 10-top but it looks great and gives the effect of a much more expensive guitar. If that's not for you then the opaque black finish will give you a subtler look. PRS call the neck shape regular and it fits very comfortably in the hand, the shorter 24 1/2"  scale length providing a smooth and fast playing experience, especially for smaller hands. The guitar balances well on the knee and when stood up, not experiencing the body-heavy feel that this shape can suffer from.

The body is a very close match to the high end PRS Santana model and is the closest SE model so far to that great guitar. This version features 22 frets as opposed to the 24 on the top PRS model and the inlays present on the body of the original are missing on the SE model. Other than that, from a distance, no one would know it wasn't the real deal.

Acoustically the guitar is resonant and fairly loud. The setup was superb with a low action and no buzzing to be heard anywhere across the neck. One complaint is that I wish more guitar manufacturers would stretch their strings once the guitar has been setup. It doesn't create a good impression when the guitar is going out of tune as you're playing it for the first time. This is not a problem specific to PRS, but it is something that would be appreciated. As issues go this is a minor one, however.

Plugged in, we tried the neck and bridge pickups with clean, crunch and lead sounds and the SE Santana sounded great with all combinations. The PRS designed pickups have a cool, clear tone and chime that produce those classic Santana tones with ease. Chords sound defined and warm and single notes are fat and full. The combination of two humbuckers, three-way switch and volume/tone controls is a classic one but not particularly versatile. This is a guitar designed for one purpose and it fulfils that purpose exceptionally well. Just don't expect it to fit with every musical scenario you find yourself in. I found myself thinking more about phrasing and feel and playing more Latin-based lines because I had a Santana guitar in my hands. It's funny how a signature guitar makes you think differently about how you play!

The tremolo on this guitar is PRS designed as are the tuners and both feel solid and responsive. After a small amount of tightening, the trem arm was convinced to stay in place and dive bombs, subtle vibrato and small raises in pitch could be achieved with very few tuning issues to speak of. Frets feel exceptionally smooth and with the lower string tension provided by the shorter scale length the guitar it is incredibly easy to play.

If you're looking for an exceptional guitar to get you as close as possible to that Santana signature sound and don't want to spend a small fortune then here is the solution!