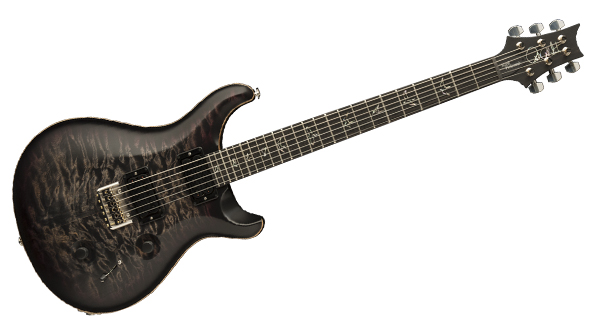 Mark Holcomb is a rising star in the world of Progressive Metal guitar. He has an incredibly fresh and unique writing style and technique that puts him up with the world’s greatest guitarists. It’s no wonder PRS has got on board to support such an artist with a fantastic signature guitar designed by Mark and PRS. Most of us probably know Mark for his work in progressive Metal band Periphery. The band mixes many different textures and sounds in their work, and finding a guitar that can do it all can be a hard thing to do, but the Mark Holcomb signature seems to be like a Swiss army knife for prog guitarists. The model I am taking a look at in this issue though isn't the rare and justifiably expensive US-produced model, it's a brand new addition to the SE series, and for those who are not familiar with the PRS range, SE is a more affordable range of PRS guitars that feature all the main aspects of their US models but at lower price points. But is it possible to distil the superb original into a lower cost version? It's been tried many times and not always successfully. Let's find out if PRS has managed it.

The first thing I noticed when I got this guitar out of the box was the body finish, a unique blend of colours that PRS call ‘The Holcomb Burst’. The body is very well made with a bevelled maple with quilted maple veneer and mahogany backwood. The neck is a 25.5” inch scale length, and it's important to note this guitar is shipped in drop C tuning with 10-52 gauge strings. This guitar seems to hold the drop C tuning on this scale length very well and the pickups, I feel, are a strong factor in the equation of why this guitar keeps its cool in this low tuning. It comes with Seymour Duncan's Mark Holcomb signature pickups and they really deliver. The bridge pickup is an ‘Omega’ whilst the neck pickup is his ‘Alpha’ model. These are controlled by a three way switch, volume and tone knob. I must mention now, I did not realise at the time of filming that this guitar also features a push/pull coil split in the volume control, I had just got the guitar out the case and was taken away by its roaring aggressive tone. The pickups feel/sound like they are high output, however they keep definition when playing dense chord voicings. This is very important for the style of progressive Metal that Mark plays. He is known for his colourful chord voicings and note dense riffs that really need this clarity whilst keeping sustain and aggression. One other factor that might add to this clarity is the ebony fingerboard wood, which will naturally give a nice upper mid cut to notes that will burn out nicely with the mahogany backwood of the body and maple top.

The neck is simply wonderful! It features a satin back which gives it a very smooth feel. My thumb never got ‘stuck’ to the back whilst moving around at all. It’s a thin neck, though not as thin as some guitars in this market of Metal guitars, and it’s also quite wide, making complicated chord work and modern techniques a lot more accessible. Another thing adding to its playability is the string through body and super low profile bridge which makes muting/palm muting techniques very comfortable. No parts of the bridge stick out in any way that could distract you from your playing. The string through bridge and body is also super easy to adjust, something that would come in very useful if you are changing string gauges or wishing to adjust the action...though I must say, this guitar came set up with very low action but with no buzz, which is rare out of the box these days!

To summarise I would say this guitar is suited to the Metal or hard Rock player looking for a unique, solid and versatile guitar for the progressive style. If you’re a fan of Mark Holcomb as I am, then that might even sway you even more into trying one of these guitars out but it's by no means only going to appeal to Periphery fans. This PRS SE is super playable, sleek and has a monstrous tone. It also sells at an eye wateringly low price for such a superb quality instrument! Any prog/Metal nut has to at least try out one of these and see for him (or her) self why we think this is one of the most exciting guitars so far this year! At the price, we also think it's fabulous value for money.