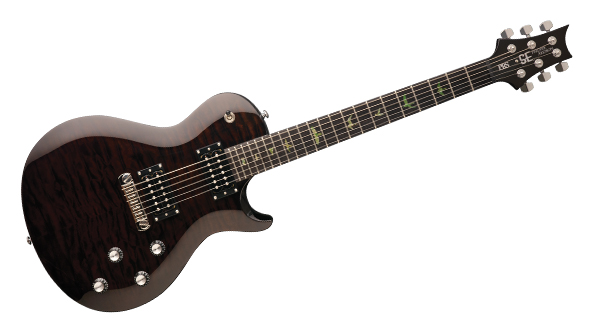 Back in issue 10 we interviewed Opeth's guitar duo of Mikael Åkerfeldt and Fredrik Åkesson - now it's time for the latter's signature PRS guitar to get the treatment! Tim Slater officiates.

For readers who may not necessarily be au fait with the world of progressive metal music (perish the thought! - Ed), Sweden's Opeth boast a formidably talented lead guitarist in the form of Fredrik Åkesson and his skills have recently seen PRS honour the fleet fingered 40 year old from Stockholm with his own personal SE Signature model. And Fredrik isn't the only member of Opeth to receive this honour; lead vocalist/guitarist Mikael Åkerfeldt also took delivery of his own PRS SE Signature earlier this year.

The SE Åkesson model is based on PRS popular PRS SE 245 single cut but the overall feel is much closer to another older and very familiar single cutaway design, whilst sidestepping falling into the trap of becoming yet another Les Paul clone.

For starters, whilst the Åkesson's solid mahogany body is significantly thicker than the standard PRS SE 245, the SE Åkesson still remains lighter and more resonant than a typical LP style axe. SE models always seem to possess an abundance of natural resonance and the SE Åkesson is no exception, although the thicker body also seems to lend this guitar's acoustic and amplified tones extra gravitas. The quilted maple top is finished in an attractive shade of dark brown (Forntida Brun), a shade that does the attractive maple veneer justice.

Bearing in mind that Fredrik Åkesson is regarded as something of a virtuoso Rock player, his signature SE features a couple of subtle appointments that help pave a smooth pathway to unhindered shredding. The lower cutaway is significantly deeper than the standard SE 245, granting easier access to the upper reaches of the neck during solo flights. The mahogany neck features PRS' standard Wide Fat profile and is topped off with a smoothly luxurious ebony fingerboard finished with 22 jumbo-sized frets. The classic bird shaped fingerboard inlays present no puzzle regarding which stable this guitar belongs to and, as ever, this Korean-made PRS is a model of craftsmanship, demonstrating an exemplary standard of finish that would leave many of its rivals envious.

The short 24.5-inch scale length is another feature that won't exactly alienate Gibson players, even fairly heavy gauge strings of 0.11 still feeling supple and easy under the fingers, even when the guitar is tuned to standard A440; although players who habitually down-tune might find that this scale length is a little too short to maintain an adequate string tension.

The control layout is wired to suit Fred (I'm sure that he won't mind if we call him Fred) Åkesson's personal preference for the bridge pickup. The quartet of rotary volume and tone controls sees the front two knobs functioning as the volume and tone controls for the bridge humbucker, putting both within easy reach of the player's hand. Even if you are more accustomed to the more traditional wiring, where the tone and volume controls for each pickup are mounted horizontally rather than vertically as they are in this case, the SE Akesson still feels very intuitive and doesn't cause any confusion.

Sonically, the Åkesson is surprisingly gentle and accommodating. I might have plugged in expecting a wild uncontrollable beast, rearing and snorting as I fought for control, but what we actually find is a very mellow and amiable guitar that places more emphasis on sparkle and presence than unbridled aggression. The huge TonePros adjustable stop tailpiece bridge plays a role here, providing a solid anchor for the strings and helping to boost the SE's abundant natural resonance by transmitting more of that all important string energy directly down into the body. TonePros hardware locks into place, too, guaranteeing that the bridge won't fall off when the strings are removed or slackened.

Both pickups are PRS designed 245 humbuckers and whilst neither appears to possess a particularly high output, they still offer the warm beefy crunch and searing top end that has become something of PRS' signature tone. Overall, the SE Åkesson feels like it has plenty of room to breathe; back off the volume and it will jangle away quite happily, crank it up and it barks with the forbidding authority of a Rottweiler guarding a scrap merchant's cash box!

In common with many of its stable-mates in the SE lineup, the Åkesson SE is a seriously grown-up guitar that is also very affordable. Compared to many signature guitars, this SE feels more like an everyman's guitar. You could walk into a guitar store, pick up one of these and enjoy playing it purely on the strength of its looks and features without even realizing that it is a signature instrument and in our opinion that's why it works.

Regardless of whether or not you are an Opeth fan, a follower of progressive metal, a Blues player or a classic rocker, if you love this classic cutaway/mahogany combination then the PRS SE Fredrik Åkesson ticks all of the right boxes. What's more it offers really impressive value for money.  This isn't a cheaply made Chinese clone, it's a well designed, beautifully put together Korean-made guitar with high quality materials and components, set-up to the exemplary standard that has set PRS among the most consistently well turned-out brands you will find in a guitar shop. We've given it four and a half stars - yes, it's really that good.