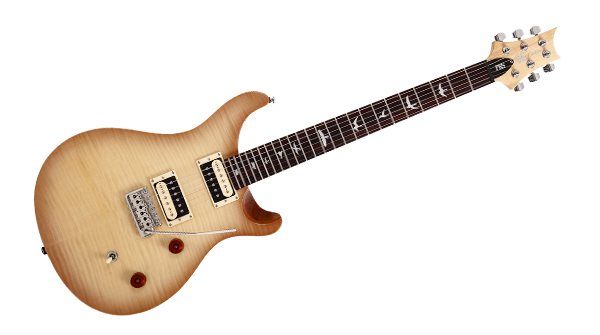 Some guitar companies excel at both quality and consistency. As I've said in Gi reviews before, names that spring to mind include Music Man, Suhr, G&L and, of course, PRS. I have tried many PRS guitars over the years and they are lovely every time, but I still don't own one. It's not because I don't like them, because I do, and I'm sure it's only a matter of time before I add a nice played in PRS to the embarrassingly large number of guitars I already own. My point being, some guitars you could buy unseen and untried and know it will a great one. That sort of quality usually comes with a large price tag, but PRS's SE range of Korean made models, from which the SE Custom 24 comes, is a fraction of the cost of the U.S made guitars, but seems to suffer no loss in either quality or tone.

They say this model is based largely on Paul Reed Smith's first run of guitars that were shown at various trade shows in 1985 and you have to look hard to see how they are keeping the cost down compared with those originals. And I know they are consistently like this and that wasn't sent a hand-picked tri-colour sample. How do I know? Because I've seen a few of these SE custom 24s owned by eager young players at the Guildford academy where I lecture, and those too have all been really good sounding, usable, pretty guitars.

To get down to the Custom 24, in a nutshell what you get is a nice flame maple top on a mahogany body and neck, with neck and bridge humbuckers, both of which produce a sweetly voiced midrange bark. And that adds up to good Les Paul tone for relatively little money!

So how does PRS do it? Well, beside making in Korea, labour and construction have been saved by the use of a flat maple top as opposed to the carved style on the high end PRS guitars. You get the familiar bird inlays, which are very neatly done, but on close inspection, the actual material used for the inlay is a plainer looking substance (PRS calls it 'pearloid'), rather than the mother of pearl/abalone type material found on the U.S versions. It's still nice though, but just another tiny way of keeping the cost affordable. Moving on, the tuners are non locking, but seem to work well and the high gloss finish will obviously be some kind poly, not the very expensive, labour intensive, nitro finish of the U.S guitars.

So have any important sacrifices been made? A good place to look is in the trem system which is a recurrent weakness we on Gi keep commenting on with guitars coming from the Far East, but there are no such issues here. The trem was fantastic, with a lovely positive feel, once I'd tightened the little grub screw which tightens onto the arm. That was no trouble, because the tiny allen key came supplied with guitar. The guitar kept its tuning very well, in fact, with and without trem use. It is always a major annoyance with any guitar that comes with a trem system if it doesn't even attempt to hold its tuning, but with this PRS, once I'd tuned it up after its journey, it stayed in tune for the whole review and my general noodlings whilst the camera guys were setting up, which is great sign, and a good indicator that the whole construction of the guitar is stable.

The mahogany neck and fret work is all very comfortable. Quite wide and flat but still substantial, with 24 frets easily accessible. Most players would find the playability of this guitar to be excellent, with no buzzing or choked bends, but still with a nice low-ish action. I would also like to mention the fact that the actual rosewood fretboard had a nice dark colour to it, which is good to see, because sourcing good rosewood is now becoming a quality issue for guitar makers. More and more rosewood fretboards on modern made guitars seem to be getting paler and a bit insipid looking, even on some very expensive big name instruments. It's one of the things I'm starting to watch for. I am lucky enough to own a '62 and '63 Strats, and when you look at the Brazilian rosewood boards on those guitars, it is almost as dark as ebony. Sadly, the days of sourcing quality wood like that are over for most modern guitar builders.

There are no surprises in how the Custom 24 sounds. Mahogany with a maple cap, and two humbuckers is always going to be Les Paul territory but I would suggest that this guitar is more versatile than a Les Paul, because you have a great trem at your disposal.

I really can't fault this PRS. It plays and sounds great, seems to be very well made and finished and for a twin humbucker guitar there really is not much out there that can touch it - and certainly not at the price! It won't twang like a good Strat or Tele, but it will bark and roar like a good Les Paul. Nice guitar and when you look at the street price, it's stunningly good value for money.