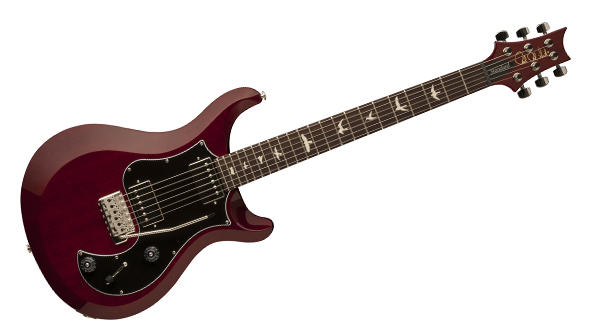 PRS Guitars need no introduction, as a high end manufacturer its instruments are on the wish list of many a guitarist. Which makes this is a particularly exciting review as we're looking at the brand new S2 Standard 22. The S2 series offers the fit, finish, feel and attention to detail that PRS are known for, yet buying one shouldn't mean having to sell your car and learning to love the bus.

The question in every cynical mind is 'so, where have the corners been cut?' And the answer is 'they haven't. They're just cleverly made'. Standing for Stevensville 2, S2 guitars are made in the company's Maryland shop; “blending new design elements and manufacturing techniques with practiced quality control and workmanship to create reimagined, fresh guitars that reach a more affordable price for players”, PRS says. Sounds great, but it also sounds hard to achieve at a lower price than we're used to from such a prestigious brand. So does the latest model live up to the high expectations PRS buyers have, and what's different about it? Be sure to have a look at the video, first, where you can hear the guitar's various tonal qualities, before we get stuck into the details!

Aside from a 22-fret fingerboard, the S2 Standard 22 differs from its 24-fret brother courtesy of two coil-splittable PRS S2 #7 Treble and S2 #7 Bass pickups, controlled by a three-way blade selector, and tone pot that you pull up to split the coils. I'm a big fan of coil splitting. Theoretically it should give you all the tonal options you ever need, though sometimes in practice that's not always the case. It's inevitable when you split the coil that you also split a certain amount of the pickup's output, making the split coil sound far weaker than the humbucker and there is also normally a noticeable difference in volume. Fortunately, the S2 doesn't suffer. Its covered pickups are fantastic sounding humbuckers, delivering just enough high output to not start sounding too muddy and hard to tame, while the split sound was also top notch, yielding all those Strat like out-of-phase qualities that straight ahead humbuckers fail to deliver. With the PRS set-up there wasn’t as noticeable difference in volume when splitting, which is great news.

One slight gripe I have in the pickup department is the placement of the selector. I personally found it quite hard to switch quickly whilst playing between pickups as the selector is placed down and behind the bridge, meaning you have to move your whole hand rather than just flicking your little finger, I'm sure however, it's something you would get used to over time and that other players wouldn't find it irritating but it struck me that way.

Staying with hardware, the S2's nickel tremolo, with its pop-in whammy bar worked very well with a smooth action. It was set-up to float slightly, all kept tightly in tune thanks to their PRS's fantastic locking tuners.

From a constructional and playing angle, this is an all mahogany guitar with a set neck and an asymmetric bevel cut making access to the higher end of the fretboard a breeze. You get 22 frets on a 25” scale length with a rosewood fingerboard and the whole thing, judging from our example, is set up for a perfect action. The neck is very thin and comfortable to play, so coupled with that set-up makes this a very “fast” neck. Ivoroid dot inlays come as standard, with an optional extra of bird inlays (which our one had).

As you would expect, the finish and attention to detail throughout was exceptional, though the scratch plate may create an aesthetic divide, but everything was top end and you get a sense that this was designed and made with the serious player in mind.

Having mahogany throughout gives a very specific tone coupled with the S2#7 pickups. Everything was there from, rich warm lows, bell like highs and scooped mids meaning you can play most styles convincingly from twangy Country, through to hard Rock. I'm also happy to report that this guitar comes in at a shoulder friendly weight, meaning it naturally resonates well too.

Straight out of the box this really was a tune once, plug in and play with nothing to adjust guitar, which you would expect from PRS and the price you are paying, but it's still nice to see that a lot of care and attention has gone into this instrument to make it really player friendly. High quality wood, hardware and electronics means great tones and sustain are at your fingertips, even more so with the option of the coil tap.

Hardcore PRS fans won't be disappointed with this new Standard 22 but it strikes us a GI Towers that this isn't really designed for hardened PRS nuts. This is a guitar for players who don't have thousands to spend and who may never have had a PRS. Possibly they assumed they never would, on cost grounds, unless they went for one of the Korean built SEs (and why not? They're fine value for money and great guitars). But our collective view is that this new S2 could swing a lot of players away from rival Gibsons and Fenders - particularly in the light of the former's recently announced price hikes. As a working guitar, which is how PRS very accurately bills it, the PRS S2 Standard 22 has a tremendous amount to offer.