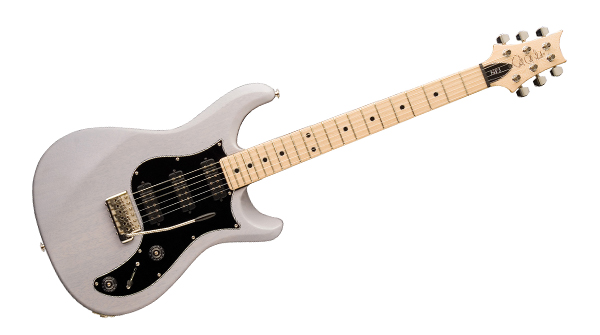 When Country's top session star, Brent Mason, starts using a new guitar, it's time to sit-up and take notice. So that's just what we did, handing Tim Slater a PRS NF-3. OK Tim, is it really just a 'Strat on steroids' or is this the PRS that takes the fight to Fender?

Paul Reed Smith has never been a man to rest on his laurels. An utter dedication to perfection means that the American guitar designer and businessman remains very much a 'hands-on'  kinda guy; even when his position as the CEO of one of the world's most popular guitar brands must demand that more than a fair share of his time is spent tackling spreadsheets instead of handling a chisel.

The NF-3 sees PRS addressing probably the largest sector of the electric guitar market, the classic bolt-on neck three pickup solid body. PRS has already dabbled in this field via now-discontinued models like the EG3 and EG4 but the NF-3 is really an entirely different animal from any PRS that we've seen before, feeling totally in step with the latest generation of guitars built in PRS's main US manufacturing facility, in Maryland.

Using the classic three pickup solid body guitar as a very basic template, the NF-3 deliberately aims to capture something of the unique resonance and clarity that the bolt-on neck design is renowned for, whilst still taking care to ensure that the NF-3 retains enough unique personality of its own. There is little point in straying too far onto ground that Fender, not to mention plenty of other manufacturers, already have well covered but many guitar players still need convincing before they to come over to the 'Dark Side', despite PRS's well-deserved reputation for excellence.

With that in mind the NF-3 also sports a revised and more user-friendly neck profile and a 25.25-inch scale length; two important features that are tailored to convince non-believers to finally make the switch.

The NF-3 features a trio of the new PRS Narrowfield mini humbucking pickups that the company claims offers the bite of a single coil whilst eliminating mains hum that any Strat player will tell you is the unfortunate flipside of enjoying the single coil pickup's special combination blend of clarity and punch. Of course, the laws of physics demand that it is impossible for a mini humbucker to sound exactly the same as a standard single coil - no matter how narrow its magnetic field - but the Narrowfield pickups definitely sound much brighter and more tightly focused than a typical full-sized humbucker.

Interestingly, the Narrowfield pickups use the same vintage style 57/08 wire that PRS also uses on its full-blooded 57/08 humbucking pickups and the coils are wound around newly revised bobbins that eliminate the gap between the pickups and pickup surrounds that you get with conventional humbuckers with exposed coils. The latter element has little bearing on the tone but it does grace the Narrowfield pickups with a clean appearance that looks really crisp and fresh. A standard five-way bladed selector switch offers a choice of each pickup individually plus the two ever-popular combined bridge/middle and neck/middle tones. The Narrowfields produce more output compared to regular Strat single coils and so a wee bit of adjustment to the amp's gain and EQ settings was necessary to prevent the Narrowfields from overloading the preamp on our test amplifier but once everything was balanced correctly the NF-3 really began to settle down nicely.

The sweet sounding slightly hollow 'quack' demonstrated by the in-between settings sounded very authentic and was particularly impressive when you consider that these are not conventional Strat pickups in any sense. There was no information regarding whether or not the Narrowfield pickups coils are tapped in order to obtain these sounds but I would hazard that they aren't: you definitely get the sense that there is slightly 'more' of everything whilst still sounding right in the ball-park, tone-wise.

The NF-3's 25.25-inch scale definitely helps to contribute a little extra tautness and snap to the lower strings but speaking personally, I have never found PRS guitars to lack anything when it comes to their ability to cut through a mix like a blowtorch. Indeed, in the past I have often found that PRS' full-blown humbuckers usually needed taming down a bit. In this instance, however, the Narrowfields seem do a really great job of combining the sparkle of a single coil with a bit of extra wallop that rock players can still use effectively.

Mega gain levels are no problem: the Narrowfields take brutal levels of overdrive in their stride, in fact the more you ladle on the gain the Narrowfields tone actually seems to 'grow' and expand, naturally compounding the solid korina body's natural resonance to deliver superb sustain and a breezy sparkly tone that sounds like one of the most sonically well-balanced PRS guitars that we've ever played!

Whilst the sound is obviously impressive, a large part of the credit for the NF-3's endearing nature must go to the superb Pattern Regular neck shape. The new neck profile feels almost like a 'D' shape and fits the player's left hand far more comfortably than the Wide-Thin & Wide-Fat neck profiles that PRS used as its standard pattern throughout most of the past decade. Combined with the easy-playing satin finish on the rear, this new neck shape gets a big old thumbs-up from us; in our opinion it helps the NF-3 appeal to players that have previously found PRS to be maybe too idiosyncratic to make them seriously consider changing over from their beloved Fender or Gibson. This time the playing field feels a lot more level and even if you've never really been swayed, this time you might find your self pleasantly surprised.

The standard PRS whammy works well, too, with a very firm action, and the new Phase III locking tuners help to maintain rock-solid tuning. The Phase III's also have open-backed gears, which look a bit strange at first compared to the heavy-duty enclosed chrome plated types but they also work brilliantly.

So, is the NF-3 a Strat on steroids or not? Well, 'not' is the quick and dirty answer. While it can definitely deliver the popular in-between tones so beloved by Strat players, the NF-3 still sounds like a humbucking guitar but one with most of the superfluous fat trimmed away. Imagine the warm-yet-strident tone of a really good Gibson SG, with the extra top end 'zing' of a decent Strat and you're getting close to what the NF-3 is all about - but you still really need to try one to really appreciate what it is capable of. This isn't a typical 'furniture' PRS that you'd stick in the corner of your studio and admire from a distance: the NF-3 is a street fighter's guitar, a real working man's axe that begs to be taken out and played to death. In that respect, it isn't cheap but it does merit the investment because you can easily envisage a good guitarist appreciating the NF-3's quality and versatility without their enjoyment being spoiled by a sense that the grass is greener elsewhere.