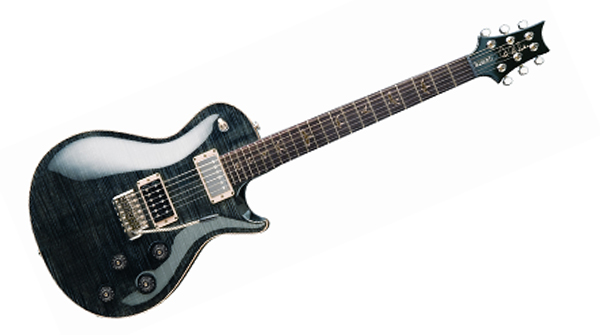 As befits one of Rock's most influential guitarists, Mark Tremonti doesn’t have just one signature PRS - he has several (if you count the special editions.) At one end of the range there's the 2013 Mark Tremonti Signature. At the other, two SE versions - with and without trem. Tom Quayle asks the big questions: how good is the Tremonti signature and how close does the SE version get?

For most guitar players, having a signature PRS guitar would be one of the pinnacles of their career, but for Mark Tremonti it seems like the next logical step in a fantastic rise within the Rock guitar hall of fame. Mark’s career has gone from strength to strength in the bands Creed and Alter Bridge where he has developed a unique and recognisable style and for 2013 he teamed up with PRS to produce both a high-end signature model and the more budget minded SE Tremonti Custom. PRS sent the Guitar Interactive team both guitars to check out so let’s have a look at the full fat version first!

The high end Mark Tremonti signature guitar is a stunning looking, single cut design that replaces the PRS McCarty model that Mark had been using previously. Everything about the guitar has been designed to suit Mark’s style, from the body shape to the high output pickups and floating bridge, resulting in a guitar that is the epitome of modern Rock.

The guitar features a thick mahogany body with carved figured-maple top and is available in a wide range of finishes. Flame and quilted finishes are also available with 'ten tops' versions also on offer for those with sufficient funds. The 22 fret neck comes in mahogany with a rosewood fretboard and 'Pattern Thin' shape for a comfortable playing experience and a fretboard that is finished with rolled edges and beautiful custom bird inlays ('Pattern Thin' is a PRS profile that has replaced the 'Wide Thin' style of earlier designs - Ed). PRS Phase III locking tuners are utilised on the headstock for great tuning stability and they add a real touch of class with the exposed gear workings and modern design.

The hardware, available in either Nickel or Gold, is all of the highest spec, with custom Tremonti bridge and neck humbuckers, a PRS Tremolo, routed for both upward and downward use, three way selector switch and volume/tone controls for each pickup.

As you’d expect, the build quality on our Maryland USA made sample was good as it gets with flawless construction, finishing and details from the superb fretwork to the beautiful neck joint and cutaway styling - this is a gorgeous looking guitar that oozes with top end workmanship. The top on our review model was stunning, too, with beautiful binding around the body and classic PRS design touches such as the recessed controls and stunningly carved top. The neck is extremely comfortable thanks to the rolled fretboard edges and Pattern Thin design offering an easy playing experience that is the perfect compromise between anorexic–shred necks and Blues baseball bats. A choice of 25” scale length and 22 frets adds to the comfortable and familiar feel of the guitar, creating a playing experience that never becomes fatiguing or hard work. The six-screw PRS tremolo is a great design that showcases the quality of the hardware components and works beautifully for upwards motion and downwards dives with a smooth motion and great tuning stability.

Tonally, the Tremonti signature is a beast of an instrument thanks to the thick mahogany body and neck and a pair of high output, aggressive sounding humbuckers. With clean sounds the bridge pickup is very detailed, easily pushing our studio amp into light crunch territory. Backing off the volume reveals a cleaner tone but with no loss of high end or detail resulting in a dynamic and responsive playing experience that brings out the best in your abilities. The mid position gives more ‘quack’ and thins out the tone for a more ‘Tele’ like sound that is superb for arpeggios and funkier rhythm parts. The neck humbucker is thick and fat but retains lots of detail in the top end making it extremely versatile for precise Rock cleans or even woolier Jazz tones.

For heavier sounds these pickups really come to life and offer a screaming Rock tone in all three positions with crisp high end and plenty of girth in the low-mids and bottom end. Rolling the volume off reveals the versatility of the pickups again with all manner of tones available despite the simple control layout.

The Mark Tremonti Signature PRS is a stunning guitar that lives up to the reputation of the brand. It’s expensive for sure but, as always seems to be the case with PRS guitars, you’re getting quality that is as good as it gets, so the cost is justified in every way.

The SE version of the Tremonti signature is one of two guitars in the SE range featuring the great man’s name. You can have a fixed bridge model or the Custom version, which is the closest match to the US-made core Tremonti guitar, sporting a single cut mahogany body and floating tremolo.

The Korean made SE adds a beveled maple top with flame maple veneer and a maple neck to the design but keeps the 25” scale length and 22 fret rosewood fretboard and hardware layout from the more expensive model. Bird inlays feature on the neck and while they are somewhat toned down compared to those on the high-end Signature, they are still beautifully realised and detailed, adding a touch of class to the guitar. The SE features neck and bridge PRS designed SE245 humbuckers with separate tone/volume controls and three-way selector switch. Completing the design is a PRS designed tremolo with an up-route and three per side die-cast tuners.

As with all of the SE guitars we’ve reviewed here at GI the SE Tremonti Custom is exceptionally well made and finished. From a distance this guitar looks like a custom shop PRS and up close it’s not far off either! The flame maple veneer looks fantastic with a crisp and tight grain, matched with binding around the body giving a similar finish to the original guitar. Small touches such as the recessed controls and carved top are missing from the SE version but they don’t detract too much from the design which still maintains a definite element of class and refinement within its Rock heart. Fretwork and finishing are superb with top quality fret dressing and paintwork that beats most of the competition hands-down in this price range.

The neck is just as comfortable as the one on the high end model, the only exception being the lack of rolled fretboard edges and a slightly less resonant, alive feel through the neck wood, which is to be expected give this price difference. The playability is also excellent thanks to a well-balanced body to neck weight ratio and the 25” scale length matched to a comfortable body shape and easy upper fret access for a single cut.

As we've said every time we've reviewed a PRS SE, the factory set-up for all of them seems to be very well done and this model is no exception with a nice low action for fast lead playing and rhythm work. The tremolo works beautifully, offering smooth operation and around a minor/major third of upward motion thanks to the routing underneath. The bar is solid and will stay in place if required with good tuning stability even after low dive bombs.

Tonally, the SE model is every bit as aggressive as its bigger brother, just lacking ever so slightly in clarity compared to the higher end pickups. You’ll certainly not feel a need to change these SE245’s out for higher output models, as you get all of the grunt you could ever want with great quality clean, crunch and filth tones available on tap. Dynamics are well represented too with a responsive attack that feels far more expensive than it actually is.

Considering the price difference between these two guitars it’s amazing what PRS has squeezed out of the SE model. Obviously you can feel, see and hear the difference between the two as soon as you play them but the difference is not as huge as you might expect and I'd be delighted to play or own either guitar. The SE Tremonti Custom is fantastic value for money and if you can’t afford the US made version then this is the perfect solution whether you’re a Mark Tremonti fan or not. Highly recommended p so much so we've awarded it that almost unheard of extra half a star.