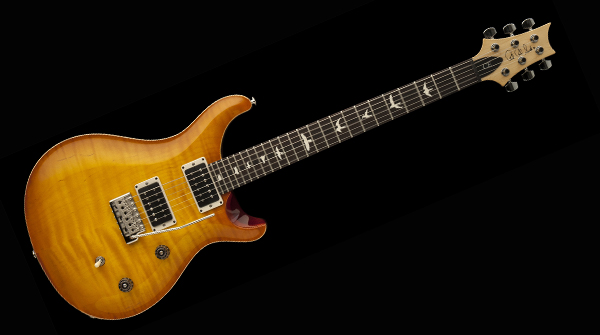 PRS currently only produces one bolt-on neck guitar - the Brent Mason signature model. Everything else in the company's current extensive line-up utilises the same set neck joint that has become so synonymous with the PRS brand. Of course the company has historically produced the original CE guitar with a bolt-on neck, the CE22, EG series and Swamp Ash Special, but those guitars are not currently available and the original CE has been out of the line-up for quite some time now. Enter the CE24, the latest PRS guitar to sport the classic mahogany body and maple top, but paired with a bolt-on maple neck and rosewood fretboard.

The CE24 is interesting for more than just its construction since it sits somewhat firmly in price between the super-expensive all USA-made Core line and the more affordable S2 line with its Korean made parts. Just like the S2 line, the CE24 is made in USA with Korean made bridge and tuners, but importantly features high end US made 85/15 pickups found in some of the Core range models - a significant step up from the Korean pickups found in the still excellent S2 guitars. The guitar also shares much more of the contoured body design from the Core models compared to the flatter topped S2 models. The contoured section under the controls has gone, but the top is certainly carved to be somewhere between the S2 and the Core range and the price reflects this well. The maple top is also slightly shallower than that found on the Core range, presumably in order to shave costs, but the scraped binding and body shape disguise this well and the guitar looks superb all the same.

The CE24 features PRS’s very comfortable Pattern Thin neck shape and 24 standard, rather than jumbo, frets. One thing to bear in mind here is that this is quite a thin neck design and there are no other options available so, even though the neck is very nice to play, those with a desire for fatter neck profiles will be disappointed. The neck joint is very well executed with the standard PRS neck heel and a small ‘PRS Guitars’ adorned back plate with the neck bolted on quite far down the body compared to other manufacturers. You get the classic PRS headstock design with three-per-side locking tuners and a PRS designed, six-screw tremolo that can be set to float or be flush to the body as required. The bridge is very smooth indeed and returns to pitch beautifully even after significant abuse with no creaking or stability issues. The pair of 85/15 humbuckers are controlled with the ‘McCarty’ style switching system, based on a 3-way rather than 5-way switch and Volume and Tone controls, with a Push/Pull split on the Tone control for PRS’ version of single coil tones, giving a total of six sounds on offer.

The guitar is beautifully constructed with excellent finishing work such as slightly rolled fretboard edges and a satin, nitro-cellulose neck finish for a smooth, fast feel. Features such as the soft bridge edges and low-profile pickup rings add to the comfort level too and, whilst the flame top will never match a Core line model, it is a good example and more than adequate at this price range, being available in no less than ten different finishes, including two opaque metallic options. Playability is, typically of PRS, excellent, with a superb factory setup and even action that makes playing chords and lead work a breeze. The guitar feels immediately like home and familiar and is very well balanced for sitting and standing.

Sonically this is a very versatile guitar and that is due in no small part to the fantastic 85/15 pickups that give the guitar an impressive clarity and dynamic response that it could be argued is less present in the S2 range. These humbuckers handle clean and drive tones with a great deal of class and can produce convincing tones for almost any style you choose to throw at them. The guitar can do the bolt-on single coil tones very well with the split engaged, although there’s a definite PRS flavour to the tone since the unused coil still imparts itself on the tone somewhat. Equally the CE24 can handle thumping humbucker Rock tones impressively for a bolt-on but retains a very useful snap and clear high end that can be found wanting on some set-neck guitars.

PRS is onto a winner with the CE24, although it would have been nice to see a hard case included as opposed to the, admittedly very nice, gig bag. The guitar is obviously closer in hardware and construction to the Core line than the S2 range and that is reflected in the price. For that money you are getting very versatile guitar with some fantastic sounding pickups that give you even more of the Core line instrument qualities but without having to hire a personal body guard for your guitar every time you take it out of the house.