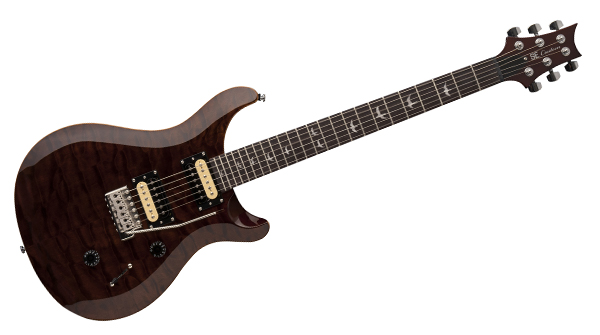 In the GI 32 we looked at the brand new S2 Standard 22 from PRS and we liked it. A lot! But we were also loaned the new 30th Anniversary SE Custom 24 and that's what I'm taking a look at here. The SE Custom 24 has become the most popular SE model in a diverse line-up of guitars from PRS. The Far Eastern produced SE line was established in 2001 with the goal of providing players with high quality, reliable instruments. It might seem little different from the route that most guitar brands have followed in the past few decades but PRS has managed to avoid the pitfalls some manufacturers' sub-brands have occasionally fallen into. The SE versions we've looked at have been, without exception, really high quality guitars with no corners cut.

The 30th Anniversary Custom 24 brings a unique look to a classic instrument, with new inlays and a quilted maple veneer. Ours was finished in Vintage Sunburst complete with Nickel hardware which made for a stunning looking guitar. The finish, as you might expect from PRS was flawless throughout, the Anniversary bird inlays helping the overall look and giving you the sense that you are playing something a bit above the norm. As well as stunning looks, this guitar also felt great, was a perfect weight, balanced well, with the contours and scooped cutaway making it all very comfortable. So far a great start, be sure to check out the accompanying video so you can hear the guitar for yourself, now let’s dig a little deeper.

The traditional headstock is fitted with PRS designed tuners, which offer great tuning stability and smoothness in use. The neck is Maple adorned with a Rosewood fingerboard, and those 30th anniversary bird inlays. As the name would suggest, this is a 24 fret guitar with a 25” scale length and what PRS describe as a “Wide thin” neck shape. The neck was very comfortable to play, coupled with the larger frets and low action made everything effortless. This guitar really was set-up well, a low enough action to make things easy going but not so much that you start to get fret buzz, or chocking out when bending. The large cutaway on the neck joint, and sculpted lower horn made things easier going up the higher end. The new inlays, as well as looking good made clear visual reference points on the fretboard. The body is a combination of a bevelled maple top and quilted maple veneer, coupled with a mahogany back. This alongside the neck wood makes for an interesting/successful wood combination, with the mahogany supplying the bottom end warmth and the maple bringing out the tops and mids, alongside the slightly warmer tone of a rosewood fingerboard. All this adding up to a very versatile tone pallet suitable for any genre of music. The PRS designed bridge felt great and was matched well with the tuners to give solid tuning stability, even with some over exuberant use of the whammy bar.

An SE HFS Treble is used for the bridge pickup and an SE Vintage Bass for the Neck, all controlled by a push/pull tone control and three way blade selector. The pickups on this guitar really are great. In full humbucker mode you get all the power and output you could hope for without getting into the silly high output hard to control area that a lot of manufactures seem to go for, it's true what they say: less can be more. The bridge pickup was bright and will cut through any mix with clear definition, and the bass pickup had plenty of bottom end and depth whilst maintaining a tight feel. With subtle use of the volume control I was able to achieve crunchy rhythm and blues sounds, right through to saturated leads, and tight rhythms. The coil tap is a great feature allowing you to change the humbuckers to single coils, giving you those “Strat” like out-of-phase tones which were pretty authentic. Although coil taps are a great idea there has always been the issue of volume drop as you are essentially halving the power of the pickup. There was a slight decrease in volume on this guitar but not as much as I have experienced on others. It's just something to consider on your set-up if you switch from one setting to the other, a volume pedal will help this situation. My only real gripe of this whole set-up is the position of the blade selector, it’s not ideal for fast pickup changes on the fly, I'm sure the position is something you would get used to and adapt your playing, but I found myself missing it quite a bit during my time with this guitar. The Tone control was very reactive and offered a lot of variations, not just off or on as some do.

The Custom 24 is the quintessential PRS guitar. This iconic instrument was the first model that Paul Reed Smith brought to the public at PRS Guitars’ first Winter NAMM show in 1985 and has been a top seller ever since. Therefore it was right that a celebratory version be realised for its big 30th birthday. Fans of the traditional 24 will not be disappointed with this release, it's not just a gimmick with a fancy finish and different inlays. Vintage pickups, coil tap, wide thin neck, this guitar offers a versatile array of PRS tones from a classic era. Whether you are an existing PRS fan looking to add to your collection, or a PRS virgin, you won’t be disappointed in this stunning looking, playing and sounding guitar, go check one out for yourself  ASAP!