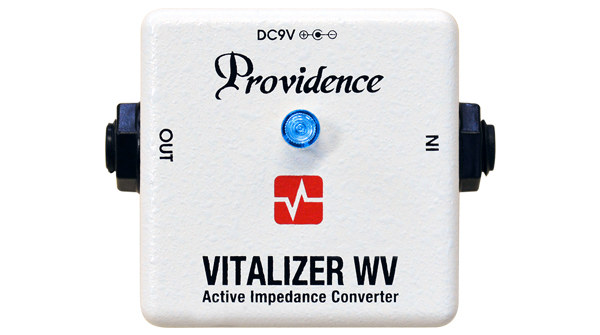 Japan's Providence, one of the top boutique FX makers, makes a welcome return to GI. But what's a 'Vitalizer'? Lewis Turner finds out.

I have to hold my hands up and say that I had never heard of Providence until being given these items to review. With a bit of research I soon found out that it is a highly respected 'underground' manufacturer (we reviewed the Providence Red Rock back in GI 26 - Ed). Providence is a brand of Pacifix Ltd, Japan. The company began in 1996 and at that time offered products like A/B boxes and dirt boxes like the SOV-1 and SDT-1 overdrive/distortions. Later, it developed the PEC-1 Audio Routing System, and that helped put them on the map. The Providence development team is headed up by Yuki Hayashi (overdrive/distortion pedals – SOV-2 and FDR-1, etc.) and Atsuki Saito. Atsuki is responsible for development of time and modulation pedals like the now highly collectible DLY-83 Delay 80s. This info and more made me wonder if I had been missing out on this manufacturer, so I was keen to get plugged in and try these items. We have two products on review from Providence the Vitalizer WV and Vitalizer FB. Please check out the video to see and hear these products for yourself.

Providence's Vitalizer WV is a buffer that converts a high impedance signal to low impedance, making it less likely to degrade the sound quality by picking up noise or losing higher frequency sound while going through various wiring and electrical circuits. It's an 'Active Impedance Converter' that should maintain the natural tone of your guitar when going through multiple pedals. Wah and Volume Pedals in particular tend to cause this kind of loss of tone. By sending a low impedance signal from the Vitalizer WV to the Wah or Volume pedal, the player is able to control the signal with minimised degradation.

Depending on your set-up you could use this device either at the last position before the amp, or first position after the guitar. It's a pretty well recognised fact that many wah and volume pedals suck tone, so much so that I personally don’t have a wah on my board. I keep it separate for as and when it's needed. I do keep the volume pedal on there but have never really noticed a big tone suck. To try this pedal I did an AB test with a wah pedal, trying to hear a difference in tone. I was a little sceptical (especially with just one pedal) but with it in line it defiantly bought back some top end and mid range to my sound and took away some of that woofy woolly sound that a wah can give in the heel down position. Now, depending on your view of what constitutes good tone this could either be a good or bad thing. Did I think the sound was clearer? Yes I would say so, although I think I would like to try it in-line with many effects and live with it for a while to be really sure. The great thing is that if you like the effect it has, it's small, so you should be able to find space for it somewhere. Due to its size it’s unable to take a battery (it does come with an outer battery box). It seems well made and looks kinda cool for what it is.

The FB is a two in one pedal, which basically contains the WV impedance converter reviewed above, as well as being a full range booster. The built in Buffer section works the same way as the WV, while the Booster then enhances the new Low impedance signal up to 20db. This is very much a clean boost and does exactly what it says, by boosting your input signal without degrading your tone. One simple control does it all: left for less Boost, right for more, simple.

I wouldn’t really describe it as a Gain control as the sound never really gets that “Gainy”. I would use this as a rhythm boost to bring a bit more depth to chord lines, or turn it up more and use it as a boost for your clean soloing, so it's perfect for Country as it gives the impression of a slightly driven tube amp. I put it in-line, as I did with the WV and it had much the same tonal effect when the Wah was in use, so clearly if you had this you wouldn’t have any need for the WV.

I was really impressed with the booster, which was very transparent and musical, giving a crystal clear signal. I could really make use of this pedal, especially as it never really gets to that overdriven state, even when turned up max. If you are looking for a saturated boost then this isn’t the pedal for you, but if you are looking for something to add a bit of sparkle and depth then look no further. With its Standard footprint size and power options, this is a great pedal.

To sum up, my first experience of Providence equipment was a very pleasing one. These are well made products that do exactly as they say. I was particularly impressed with the boost pedal. If you are looking for some new pedals and gear in your life then put these top of your list.