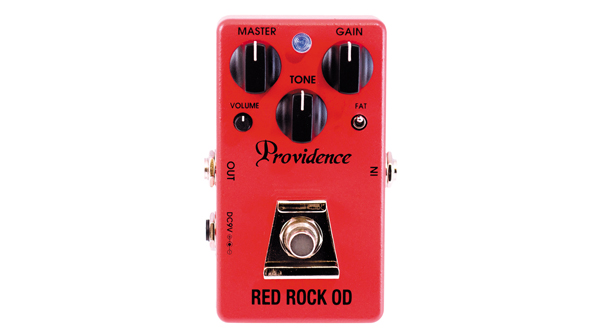 New to the Providence range of pedals is the Red Rock Overdrive. Providence has a number of overdrive and distortion pedals designed to cater for all tastes and styles and this new Red Rock model is voiced for the player that favours single coil pickupss in his guitar. Having tried the pedal with my Tyler for the first time in the review footage, I can hear why Providence say that in their advertising and promo for this pedal - because it does, indeed, produce a nice warm and very expressive sound that would compliment the player that knows how to use a Strat and the guitar volme pot.

Of course, not everyone uses low output single coil pick ups, so the Red Rock features a great little Compensation pot that acts like the input to a good valve amp. If you have weaker pick ups you can turn it up to thicken and fatten the sound, while for higher output pick ups, you turn it down for a tighter less flabby and defined response from your humbuckers. Obviously this isn't set in stone and this input level pot affects what the pedal will give you and how it will react, so you could crank up the level input, even with your 'super distortion overwound death - bucker' pick up to give you bags of squashy high gain madness, or turn it down with your 'low output but loads of tone because I play Blues' type pick up, which would give more of a grainy boost vibe from the pedal. No rules, but a great addition to the pedal that makes the Red Rock more versatile than a lot of the competition out there.

Another very cool addition is the little 'Fat' toggle switch which, when in the up position, revoices the pedal to give you a nice little boost in lower registers - perfect for the Strat player or the player that has a small 1x12 combo that lacks a bit of 'beef'. For me, no matter what amp or what guitar I was using, this switch would be permanently in the up position because it's subtle but fantastic. It is very similar in sound to some amps having a 'resonance' control to dial in some 4x12 girth to your tone, which is something we all need in life.

Providence has also designed the Red Rock to have a wide dynamic range by internally converting the 9 volt power you feed it into 18 volts, which all you pedal geeks out there will know gives a pedal more headroom and more dynamics. The word 'dynamic' gets used a lot when trying to sell overdrives, but what this means is this pedal will be more versatile in the range of tones it can deliver and it'll be very sensitive to your touch and how you use the guitar volume pot. I own a lot of overdrives and can confirm it does deliver on this point. The only pedal I own that can match it in dynamics would be my Klon Centaur, and if you know what that is, then I am preaching to the right kind of player out there!

And there's more! The Red Rock has something called an 'SCT' circuit which stands for Single Contact True Bypass. Normally your average true bypass pedal will still have three things your signal has to pass through: the input jack, the switch to engage the pedal, and the output jack. With this SCT circuit, it only passes through the switch, making it really really transparent when it's not on. Whether anyone in the known universe could hear the difference is another thing, but it's nice to know it has it, and I'm sure your friends will be impressed when you tell them. They will doubly impressed when also inform them that the Red Rock has 'Double Contact Grounding' (DCG). Translated, DCG means the pedal has two points of contact to the internal ground circuit, which apparently improves sound quality and makes it more difficult for a loose connection to occur. I did notice that the Red Rock is exceptionally quiet for an OD pedal, but I don't know if the DCG feature contributes to this.

Even the LED on off light has been given a little something extra. It will glow dimmer when your battery gets down to around 7 volts giving you warning that it's getting close to you having to put a new one in. Obviously if you run power to it, then the light will just give you a bright reassuring blue glow to say all is well. If you do want to stick a battery in it, you will need to undo the four screws in the base. The last thing to mention is all Providence pedals have a protective plate on the actual switch, which means no matter how hard you stamp on it, you will not break it.

There are many many Overdrives on the market but I would say this is one to check out with your guitar (whether it has single coils or humbuckers) and the variety of amp you use. This will tell you straight away if it's an overdrive that inspires you. It has some great features, sounds very musical and responsive. I may even have to invest in one myself.