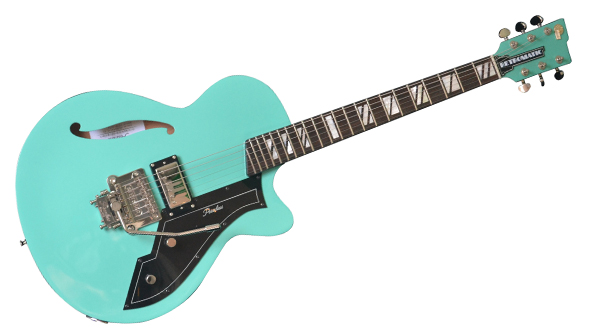 It's always exciting to get our hands on a Peerless guitar at Guitar Interactive, from the classic looks of the hollow body guitars to the class of the Martin Taylor models, Peerless are always lookers, and the Retromatic range is no different, but do they play as cool as they look?

It's impossible to deny the retro look of this model, from the distinctive shape of the headstock to the unique pickguard and range of colours, nothing brings up the vibe of an old American diner more effectively. Our review model came in Teal Green, but with the options of Ivory, Black, Honey Sunburst, Red, Natural or Gold there's something for everyone here. Bodywise we have a laminated maple arched single cutaway with a chambered block with an F hole. It's something that isn't too thick for a rocker, but not too thin for a jazzer. The block stops it feeding back like an old 175 might, but at the same time that cuts off some of the acoustic punch, so it's not as loud as you might assume. The build quality is solid as you'd expect from a Peerless, one of Korea's top makers and absolute specialists with semi-solids and archtops.

In terms of left hand handling, we've got a nice soft C neck built of maple that's really nothing to complain about, it's a real three bears situation: it's not too big, it's not too small and therefore will be suitable for just about any player. The fretwork is immaculate and well polished, not too skinny, not too big, catering to the biggest market for sure. The neck is finished in opaque black, while the rosewood fingerboard features 22 frets (with a lovely eye catching angle on the 22nd) and some retro looking inlays that have enough of a twist from the classic look without having to resort to something outlandish to stand out.

The P1 comes loaded with a single bridge pickup (designed by London pickup designers Monty's Guitars) which gives enough quality in tone that you don't feel you're missing out on that neck pickup, it's really not like it's totally unreasonable that there are players who might only need a bridge pickup (Eddie Van Halen, anyone?) and if that's a real deal breaker then check out the P2. It delivers with both the cleans and the crunch tones, and even with the 7.4k rating, it actually functions pretty well as the pressure increases.

The real cool option here is the inclusion of a Stetsbar tremolo system which was designed as a retrofit unit, but anyone with experience here will tell you that it does everything a Bigsby does but with a little more reliability and stability. We reviewed one on its own way, way back in issue 4 but the conclusion remains the same. To start with, there are Stetsbar Pro II trems that you can buy (and for not a huge amount of money) and retrofit to almost any guitar without marking it in any way. That ancient Les Paul Jnr? A vintage Tele? A 335? No problem at all! If you've not used one it's really hard to describe how smooth the action on the bar is, almost like a vintage trem with one spring. It's absolutely effortless and a joy to play with. It's never going to deliver Dimebag style bombs, but if that's what you're after, then this probably isn't going to be the guitar for you to begin with. In this case, the Stetsbar has been fitted by Peerless as an option and we reckon it's a fabulous choice. While you can absolutely order the guitar without the tremolo system, it's definitely better for it and really doesn't result in any sort of trade-off. It's much better to have it and not need it than need it and not have it!

So who does the guitar appeal to, or who would I recommend it for? Well ultimately it's going to do the trick for anyone who digs the look, because as a player there's no doubt that it delivers. If you're into your Blues, Rock and Roll, Jazz, or even Country, the chances are that the Retromatic P1 will do the trick for you. (And you can win this very guitar in out free entry competition in this very issue! - Ed)