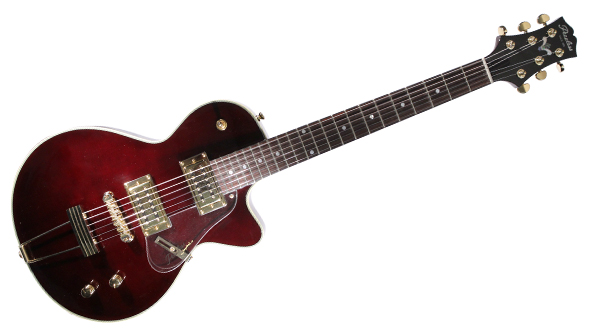 Peerless has launched a new guitar on the world. It's called the Jezebel, and in these modern times when so many guitars have a name that is just a couple of letters and a random series of numbers, it's nice to see Peerless has gone for an actual name. It's also a fresh design for them as well, which is refreshing.

Taking our review guitar out of its very nice plush lined hard case, we are greeted with a classy colour combo of deep wine with gold hardware. The other finish choice for this model is midnight blue with nickel hardware. Gold hardware always looks pretty when it is shiny and new but always be aware that the gold will eventually wear, which will probably make the guitar look cooler. Then again, nickel tarnishes but tends to look aged rather than worn out. I do like this deep wine colour though, which will always look cool, whereas blue on a guitar can go in and out of fashion.

I guess we could call the shape slightly 'Les Paul' with its curves and single cutaway. The design is both new and familiar, and nothing leaps out as being wrong or ugly. The Jezebel is 44mm deep and completely hollow in design save for a small solid mahogany block under the bridge which goes towards combating uncontrollable feedback that can come from hollow guitars at high gain or louder stage volumes. This is probably not going to be your first choice of guitar if you are going to play Metal, so you should be safe on the feedback if you're sensible with your gain settings. Wood for the body is compressed laminated spruce for the slightly arched top, with laminated maple for the back and sides. It even has scalloped X bracing for support. The neck is mahogany with a rosewood fingerboard and has 22 medium sized frets. The whole thing is lightweight and compact and generally is an easy feeling guitar to stand or sit with.

All the Peerless guitars I have tried in the past have had their own TV Jones Filtertron style pick ups installed, which give bags of character and sound much like an old Gretsch style guitar would. The pick ups in the Jezebel are voiced differently for Peerless and are Gleeson dual pole humbuckers with the bridge wound at 8.2k and the neck wound to 7.4k. Dare I say these are voiced much more towards the Rock side of things, rather than the Rockabilly. They have quite a nasal grunt and pack a punch. For my taste they lack a little sweetness and character, especially when you back the volume pot down, which is a good test of any pick up. I'm not saying they don't sound good, but they are definitely voiced to be more in your face than the usual Peerless Filtertron recreations. Pick ups are selected by a chunky three position selector and there is a single volume and tone positioned in what feels like the correct place for this style of guitar.

This particular guitar had quite a heavy string tension and yet the strings didn't look to be particularly heavy. String bending and vibrato at the top of the bend took some thinking about. You may find that another Jezebel guitar strung with exactly the same string gauge feels completely different, though. Different 'feel' on exactly the same type of guitar is nothing new, and I have played plenty of Fenders and Gibsons that are supposed to be the same on paper but are worlds apart in their 'feel' and string tension. It's something to do with the nature of wood and how a guitar flexes. If I tried another Jezebel and it put up the same fight, then I would be slightly more wary, which reinforces the point we often make here at GI - it's really best to try any guitar before you buy it.

Like all Peerless guitars, there are retro appointments everywhere, such as the styling of the volume and tone knobs, the trapeze tailpiece and the aged white black white body binding. Even the clear acrylic pick guard adds a retro flavour. They call the black headstock the 'Lady Lip' shape and which I think carries through all Peerless models. The truss rod cover is ebony and held in place with black screws. The neck has black binding and pearloid dot markers. It all works nicely in a retro way without being over the top.

Peerless guitars are manufactured in Korea and the value for money is superb for what you get. The quality of the fit and finish is excellent and all Peerless guitars look like they should cost a lot more. I'm a definite fan of their big bodied Gretsch clones, but the Jezebel is part of a different family for me. She is getting a great reaction wherever she shows up, so if you want to form your own opinion, you best go meet her!