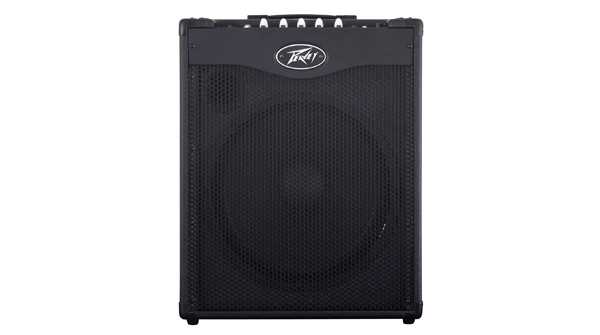 Peavey is no stranger to the Bassment - for the very good reason that it makes so many bedrock, industry standard bass combos. We featured the 400 Watt digitally powered TKO combo, also sporting a 15” speaker, back in issue 13 but this combo, although having the same size speaker, is physically smaller and would be aimed at those needing a loud combo in a more compact size.

OK! Let's move straight to the simply laid out control panel to see what tonal adjustment options are available.

From the left, where I'd usually start in my reviews, I would expect to find the input socket, but on this amplifier the XLR socket for the DI output is placed here instead. Next to that we have two 1/4” input sockets marked 'passive' and 'active'. This is a normal find, though personally I'd prefer it is one was marked as padded or 'low gain' rather than active or passive. Ultimately, the idea is that you plug basses with high output levels in to the active input and those with lower levels in to the passive input, as the former of the two will accept higher levels before the pre-amplifier circuitry starts to distort. Calling them passive and active these days can lead to confusion, I feel, as there are certainly passive overwound bass pickups that have a higher - much higher - output than some instruments with all active components on board. Just use the one that sounds best to you!

Back on topic again, the dials to the right of those sockets start with the input gain level control which underneath includes a 'TransTube' switch. This is a clever feature that, as the gain control is wound up, automatically turns off the tweeter for more 'authentic tube tones'. This is especially useful when using amplifier distortion as an effect as it can sound fizzy through a tweeter. Muting it completely will give an overall smoother sound via the 15” speaker on its own. Too much high output level distortion can also damage tweeters as well, so this is a useful safety feature too.

The three band EQ section is a fairly standard affair offering cut and boost at three centre frequencies, but the inclusion of bass 'punch' and treble 'bright' boost buttons add additional tonal dimension to your sound too. Under the middle control knob there is a frequency shift button that, moves the centre frequency of the mid control between a higher and lower centre. This is useful for honing in on that area of the middle frequencies you'd like to treat with the equaliser.

To the right of the three band equaliser is the master volume control and here you'll find another nice feature, a psycho-acoustic 'enhancer'. The idea of this is to help support the lower frequencies and thus enhance them for a fuller tone. I found that at the volume we were playing at in the studio, the effect itself was only just noticeable. I suspect it'll be more useful in a band situation or larger musical environment.

Finally, just to make life as convenient as possible, Peavey has included a chromatic tuner with mute switch for silent tuning, along with input and output sockets for listening to external audio devices through the speaker, as well as being able to use earphones for silent rehearsal. Oh yes, and lest I forget, the Max 115 also includes Peavey's DDT limiting circuit designed to protect the speaker from over-excursion by limiting the amplifier's output.

In use, the Max has a very usable rounded tone and it provides its own colour to your instrument: in fact Peavey refers to a 'classic tone' in the amp's documentation, especially when discussing the TransTube circuit.

Peavey's Max bass combo amplifiers come in a range of guises starting with a mini practice model  with a 6.5” speaker driven by a 10W amplifier, all the way through 8, 10 and 12” speakered models finally completing the range with this 300W version with a 15” speaker and a tweeter as discussed.

Both the Max 110 and Max 112 versions, by the way, also have a handy 'kick back' position for the cabinet so that you can use it like a stage monitor, facing your ears rather than your legs. A useful option.

To sum up, this amplifier is great for most situations and will provide enough volume for small Rock bands set ups - especially at clubs and rock schools. The smaller cabinet size makes the combo easier to move around, but inevitably there is also a trade-off in the perceived bass end output due to the lower cabinet volume. Some laws of physics just can't be beat, but it's not a major concern and if you want more bottom end there are other, larger, Peaveys that will give it to you.

The tuner and DI output are welcomed and the rugged design should mean that this combo will last - well, of course it will - it's a Peavey! The brand has a great reputation for reliability and longevity and there's every reason to believe the Max will be no exception.