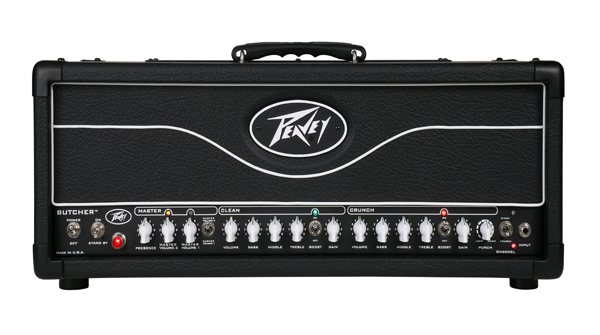 Peavey has carved out a great reputation for its high quality Rock and Metal amps. Does the brand new Peavey Butcher 100 tube head keep the Meridian Masters ahead of the pack?  Power chords at the ready,Tom Quayle checks it out!

Having produced some of the most iconic Rock and Metal amps, a new top-end Peavey head is an exciting prospect. With a healthy reputation for crushing tones and great construction, I was very optimistic when I unpacked this substantial Peavey Butcher head and plugged it into our 4x12 studio cab.

The Butcher is an American made tube amp, featuring independent clean and crunch channels and an array of controls for shaping your tone, provided by five 12AX7 preamp tubes and four EL34 power tubes. Each channel has independent three band EQ controls with volume and gain with a global presence dial for shaping the top end frequencies. Both channels feature a switchable pre-gain boost for adding in more filth with the crunch channel also sporting a 12-segment 'punch' control that allows you to shape the low-end response to your taste or requirements. Two switchable master volumes allow you to dial-in your normal volume level plus a solo boost and since they are post-gain you'll just get louder without affecting your tone.

Round the back of the amp you'll find an active effects loop with send and return controls allowing you to match the loop to rack or pedal based effects. Next door is the footswitch in and Peavey's microphone emulated MSDI output for plugging the head direct into a desk for recording or live use. The MSDI tone can be dialled in for bright, normal or dark settings, giving you control over the high frequencies in your signal. The amp can take 4, 8 or 16 Ohm cab configurations with dual speaker outputs and can be switched to half power mode (50 Watts) using the power switch on the back. 4, 8 and 16 Ohm cabs can be used in either power mode using a selector switch.

The Butcher feels very well constructed and is reassuringly heavy, weighing in at just under 25kg. Obviously, that's not light but what 100 Watt valve head is? The controls all feel very solid and tight and the general finish and construction is high quality with black tolex covering the chassis and a white inner detail running around the Peavey logo and central fascia. The faceplate is very clean and not cluttered with hundreds of controls like a lot of modern amps. As such, the Butcher is very easy to use and learn, making it simple to dial in tones quickly and efficiently. It won't take you months and months to master this beast.

A solid metal footswitch is included in the package (good to see that! - Ed) and connects via a very secure DIN-cable running to the back of the amp with a very long cable run. Channel switching, master volume selection, effects loop on/off and channel boosts can be switched via the footswitch, giving you plenty of control at the front of the stage. We did notice something that may (or may not) bother some users here. During channel changes there seemed to be a slight lag. We went back to Peavey about this and were told that to get fully noiseless operation, the company has decided to use optical switching (Peavey isn't alone in this) but that the lag should not be bothersome and that it was possible we had a faulty sample. Our suggestion would be that you try it for yourself.

The clean channel has a great deal of clean headroom thanks to that 100 Watt rating and can be dirtied-up with higher gain settings and using the pre-gain boost switch. The tones on offer ranged from sparkly and tight with the treble and presence controls in upper positions, to darker, jazzier tones with lots of bottom end and girth.

Dynamically the Butcher is very responsive, tracking pick dynamics well with no muddiness to speak of. It's also very easy to play through and compresses beautifully at higher power amp volumes. The crunch channel is where this amp really excels, and a whole range of low, mid and high gain tones are on offer with a great deal of tonal shaping via the three band EQ, presence and punch controls. This certainly isn't a Metal amp in the manner of the 5150 for example - the gain levels here are more hard Rock than hardcore, but the tones are exceptional and can be pushed even further with a drive or boost pedal. As with the clean channel the crunch tones are dynamic and responsive, cleaning up very nicely by using the guitar's volume control. The punch control works well for dialling-in a tighter and 'punchier' low end, adding more body to smaller cabs or dialling less bottom end for bigger 4x12 configurations. Using the MSDI output yields very realistic tones and makes the amp a viable recording solution without resorting to real mics.

If you play classic or modern Rock and need a great clean channel to compliment your driven tones, then the Peavey Butcher makes for a superb choice. It's versatile, easy to use and well made, but above all it sounds great.