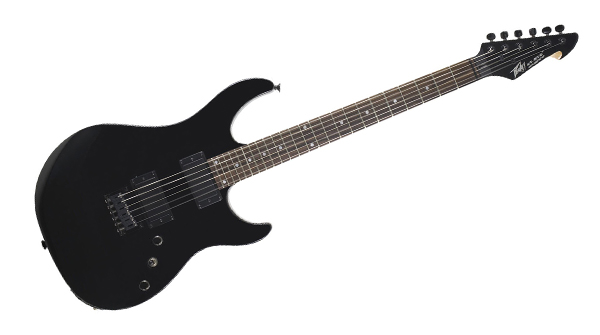 Find it hard to tune your guitar or get those tricky bends just right? Constantly annoyed by out of tune chords? Love to have access to altered tunings without the faff of different guitars on stage? Peavey's AT-200 isn't the first automatic tuning guitar the world has seen. It isn't even the second. But could be the one that finally got it right? Tom Quayle checked it out and attempted to play as out of tune as possible…

Guitars that tune themselves have been around for quite a while now, with Gibson taking the lead using motorised gears within the tuning pegs to quickly tune the strings to any chosen pitch with a few button presses. Then there is the system developed by Trevor Wilkinson which, though brilliant, hasn't set the world on fire any more than Gibson's approach did. All the systems used thus far have been mechanical - physically altering the tuning of the strings, generally resulting in a bulky and heavy tuning peg and an expensive price tag. The idea has been interesting in terms of convenience but the size and cost of the solutions is prohibitive. But Peavey has decided to change the entire game by offering an approach that is radically different. Instead of relying on clunky hardware, Peavey has turned to software for its AT-200, producing a solution that is completely different and will almost certainly bring the technology to a much wider base of users.

In order to explain how the AT-200 works it's probably easiest to refer to well-known vocal records of the past decade or so where the singer is 'auto-tuned' using software, the most well known being Antares Auto-Tune as used in the AT-200 itself. Almost every chart record you hear these days has been 'auto-tuned' and we're all so used to hearing it that we'd find the experience very odd if it wasn't used. If you can recall well known hits such as Cher's 'Believe' you'll be in the ball park of what Peavey are doing with this technology, tuning each string that you play via the onboard DSP so that it appears to be perfectly in tune.

Unlike Cher's well-known tune though, the AT-200 tunes in a much more subtle manner, giving a highly convincing 'illusion' that your guitar is tuned to perfection whilst introducing no latency and only a small change in tone. The added bonus of this system is that the DSP is constantly monitoring and correcting the pitch of every note you play, giving you perfectly tuned bends and intonated chords anywhere on the neck. Being able to 'tune' or pitch correct individual strings also means that altered tunings can be achieved and Peavey includes quite a few of these, with future additions scheduled via firmware updates.

The AT-200 features a solid basswood body, maple neck and rosewood fretboard finished to a good standard, with no obvious flaws to speak of. Hardware is at the budget end, though, with Peavey custom designed pickups, die-cast tuners and a bridge with string-thru construction. The design leans toward the Rock and Metal crowd, with two deep cutaways and a 24-fret, fast playing neck profile. The set-up on our sample was pretty good out of the box, with easy playability and good sustain for a budget instrument.

Plugged in, the basic tone of the AT-200 is perfectly adequate for such a guitar, with both humbuckers giving solid tones that won't blow your mind but will certainly do a good job for most of the demands you will throw at them. One thing to bear in mind is that these pickups are most likely part of the auto-tune system, so upgrades will be prohibited.

Operating the auto-tune function is really simple, using just the tone and volume knobs. By pushing the tone control down, the guitar enters 'passive' mode, giving you normal magnetic pickup tones via the two humbuckers and three-way switch. By pulling the tone control up you enter auto-tune mode, where strumming all six strings and pushing down on the volume knob will cause the DSP to tune each string to perfection, accompanied by a scooped tuning sound. Once engaged there is a slight roll-off in top end and a volume drop when compared to the passive tone but this can be compensated very easily via your amp. More features can be accessed via the included MIDI port, situated next to the jack socket on the bottom of the guitar. Peavey and Antares have teamed up to produce software controllers (accessed via MIDI) giving complete control over the pitch of each individual string, tone modeling, octave effects, virtual capos and twelve string effects.

In use the auto-tuning is very impressive and has no detectable latency or pitch warbling. The system never seems to get confused and can tune any string perfectly, even if it is up to five semitones out. The only downside of this system is for players who prefer quieter practice sessions, as you can still hear the original string pitches at lower volume levels - a very confusing effect indeed! A pair of headphones would solve this problem though and the added flexibility of the onboard DSP, coupled with the lack of bulky hardware more than makes up for it.

This is very impressive technology and it comes at a great price, for which Peavey deserves congratulating. It must have been tempting to introduce this advanced system in a top of the range guitar, but Peavey has opted instead to make it available and affordable to just about everyone with a guitar with pretty awesome capabilities at a very affordable price.

For recording studios, studio musicians, beginners or intermediate guitar players and for techno-geeks the AT-200 will make a great buy. What we at GI Towers would like to see now is a real top-end model from Peavey, combining this amazing technology with a pro class guitar. Full marks to the men from Meridian, though, for making this available first to the man in the street!