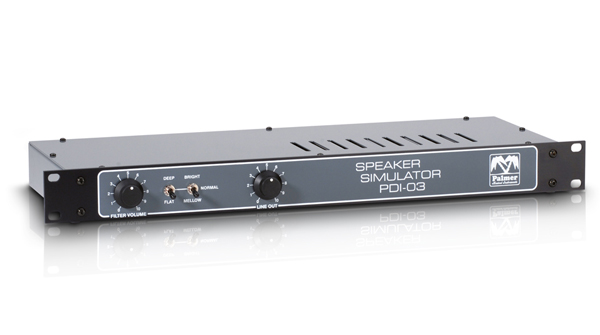 Back when I was a fledgling guitarist I would eagerly peruse music magazines (this was in pre-Internet days!) looking for interviews or features containing any references to the gear used by my favourite guitarists. One item that regularly cropped up was a mysterious item called the ‘Palmer Speaker Simulator’. The exact function of this enigmatic device remained a mystery for years but it seemed that at one time every professional guitarist had one stashed in his or her rig! Well, now I have one to test, a reissue by its highly respected German manufacturer.

The Palmer 103’s functions are actually simple yet very useful, allowing the guitarist the option of sending their guitar signal directly to a recording console or a front of house mixing board without need to mic up a speaker cabinet. The Palmer 103’s ability to function as a load box for a tube amplifier even negates the necessity to use a speaker cabinet, particularly in situations where volume or space issues mean that miking up a cab is impractical.

That said, the Palmer Speaker simulator enjoyed its peak of popularity during the 1980s, a period when Rock musicians from all walks of life were swept up in a tsunami of technological advances. So does it still stand up in this digital age when a guitarist can obtain incredible results from connecting their guitar directly to a computer, tablet or even their phone?

Compared to the vast array of sonic options available from the various plug-ins or apps available to guitarists, a device like the Palmer 103 might seem a bit unwieldy and old-fashioned to some, but taking into account its features can be utilised in the correct context I think we can safely say that the Palmer 103 still has plenty of benefits, both for the recording guitarist and in a live environment. Let me explain.

The filters negate the need for a carefully placed microphone thanks to a choice of six separate preset voice settings that are selected via a pair of switches on the front panel. In use some of these presets appear to have a more noticeable effect than others: the ‘Deep’ (412) and ‘Flat’ open-back 212 voicings are surprisingly subtle while the ‘Mellow’ (a simulated approximation of 'a typical American amplifier’) and ‘Bright’ (British) settings provide a much wider contrast between the settings. The Mellow setting has a pronounced mid-range scoop that lends itself to a more aggressive tone compared to the ‘Bright’ mode’s more strident top end. Any fears that the emulated sound is someway inferior to the sound of a correctly miked speaker cabinet are allayed by the quality of the Palmer’s emulated tones, which sound virtually identical to a miked cab. Certainly in the context of a live or recorded mix, when the guitar is sharing its space with other instruments, then it is practically impossible to tell the difference between a miked cab tone and the Palmer’s emulated output. Yes, it is that good.

Another feature of the Palmer DP 103 that often causes some confusion among potential users are the four unfiltered jack outputs on the rear panel but their function is both simple and very effective, as they can be used to send an un-emulated signal or signals that can be fed through external effects processors. Taking this to its logical conclusion the unfiltered outputs can be sent to separate power amps and speaker cabinets via the effects, thus enabling the guitarist to set up a network of dry/wet cabinets for a more versatile effects setup.

Guitarists as different as Eddie Van Halen and Jamiroquai’s Rob Harris have employed the Palmer Speaker Simulator in this way, allowing the front of house sound engineer full control over the dry/wet mix whilst also enjoying the benefits of the beefier sounding tone derived from using separate wet and dry speaker cabinets.

While sundry apps and plug-ins may offer easy and cheap ways to quickly set up very workable guitar sounds for recording or practicing, the Palmer Speaker Simulator is the professional way of doing it. It's extremely well made, as you would expect, it isn't cheap, but you feel it would easily survive a world tour. As an item of your stage/recording rig it's likely to be one of those pieces of gear you grow to rely on, delivering a completely professional sound, gig after gig after gig.