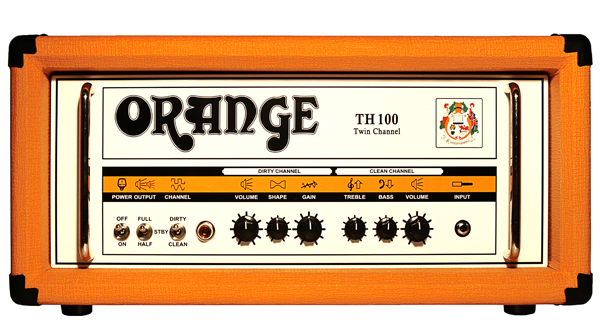 Orange has been on a roll for the past few years. Since Gi started we haven't found an Orange amp that we haven't liked. The morale at Orange has been high, too. Founder Cliff Cooper (no relation to Captain Grumpy, our editor) recently won a lifetime achievement award from the Music Industry Association in the UK and there has never been a time when we've seen more Orange gear in working bands' backlines that we're seeing now.

Which brings us to the TH-100, an amp we were itching to get or hands on, the company's top-end TH series head and the bigger brother of the TH-30 combo and head. It is a 100 Watt unit, utilising four 12AX7 tubes in the preamp and four very British sounding EL34's in the power section. A 12AT7 in the tube buffered effects loop completes the line up.

In order to create a versatile amplifier for both live and studio use and allow users to really utilise the power tube section, Orange has supplied four power options via a Full/Half power selector switch on the front and a Four/Two power tube selection on the back. This allows the user to select between two tube operation at 35w or 70w and four tube operation at 50w and 100w. These power options greatly affect the tones on offer and allow much greater power tube saturation at lower volumes with just the flick of a switch.

This level of simplicity follows through to the control section of the front panel, consisting of just six control knobs and a channel select switch. The TH-100 has clean and dirty channels, each with independent EQ and volume controls. The clean channel has Volume, Bass and Treble and the Dirty channel consists of Volume, a supremely useful Shape control and the obligatory Gain. Speaker outputs are available for all standard cab combinations and the head is built to the usual high standards that we've come to expect from Orange with a instantly recognisable design and bomb proof construction.

For the review we plugged the TH-100 into our straight-faced Orange PPC 4x12 cab and mic'd up with an SM57 and AKG414 microphones. We started in full power mode with the clean channel and a small dose of delay in the effects loop. With the volume about half way up I was instantly blown away by the dynamics present and the warm, fat tone from my neck pickup, presented with no trace of harshness or breakup from the power section. Cranking the volume to 3 o'clock gave insane amounts of volume and a beautiful crunch tone with spangly highs and tight bottom end from the EL34's. This really feels and reacts like a boutique hand-wired amp and feels very classy, inspiring you to play better!

Rolling the volume back on my guitar allowed for clean tones with no loss of high end or attack. Switching down to half power produced a beautiful AC/DC style crunch tone with a surprising amount of drive at an acceptable volume. Once in two tube mode, with the head set to 35 Watts, power tube break up happens earlier on the volume control and crunch tones can be achieved easily and rolled back for spanky cleans via your guitar. The EQ section is very effective and remains musical even at the extremes. This is a versatile head indeed and we've not even checked out the drive channel yet!

Switching over to the drive channel, the first thing that becomes apparent is just how much gain is available on the TH-100. This is Orange's highest gain head yet and if you want de-tuned chug with a tight bottom end and cutting highs you'll find it here. An alternative and darker clean tone can be achieved on this channel using the gain at lower levels with all ranges of filth available in between this and the maximum setting. The lack of dedicated Treble, Middle and Bass controls may seem tonally limiting at first but actually, replacing these with the shape control works very well and simplifies the search for a great tone. In the left most position you achieve the most vintagey, 'squashy' tone. Dialling the knob to the right produces ever more modern, scooped tones more suited to metal and higher gain settings. With the control all the way to the right a super-tight metal tone, bereft of all dims, is attained and it's perfect for power chords and palm-muted chugging riffs. Check out the video to hear for yourself.

It's amazing that Orange has combined a superb clean channel with a super-high gain drive channel and managed to produce the best of both worlds. Combined with the versatile power section and tube buffered effects loop this TH 100 presents a hard to resist package. What is more, it comes at an amazing price compared with some of the 'boutique' competition, which, in many cases, it simply out-performs. That's why, even though it is not exactly a cheap piece of kit, we have rated the TH 100 as highly as any amp we've ever reviewed: because, compared against other professional class amps of this class, it is actually stonking value for money. If you need a versatile head and don't want to have a masters degree to operate it then look no further. I may well get one myself!