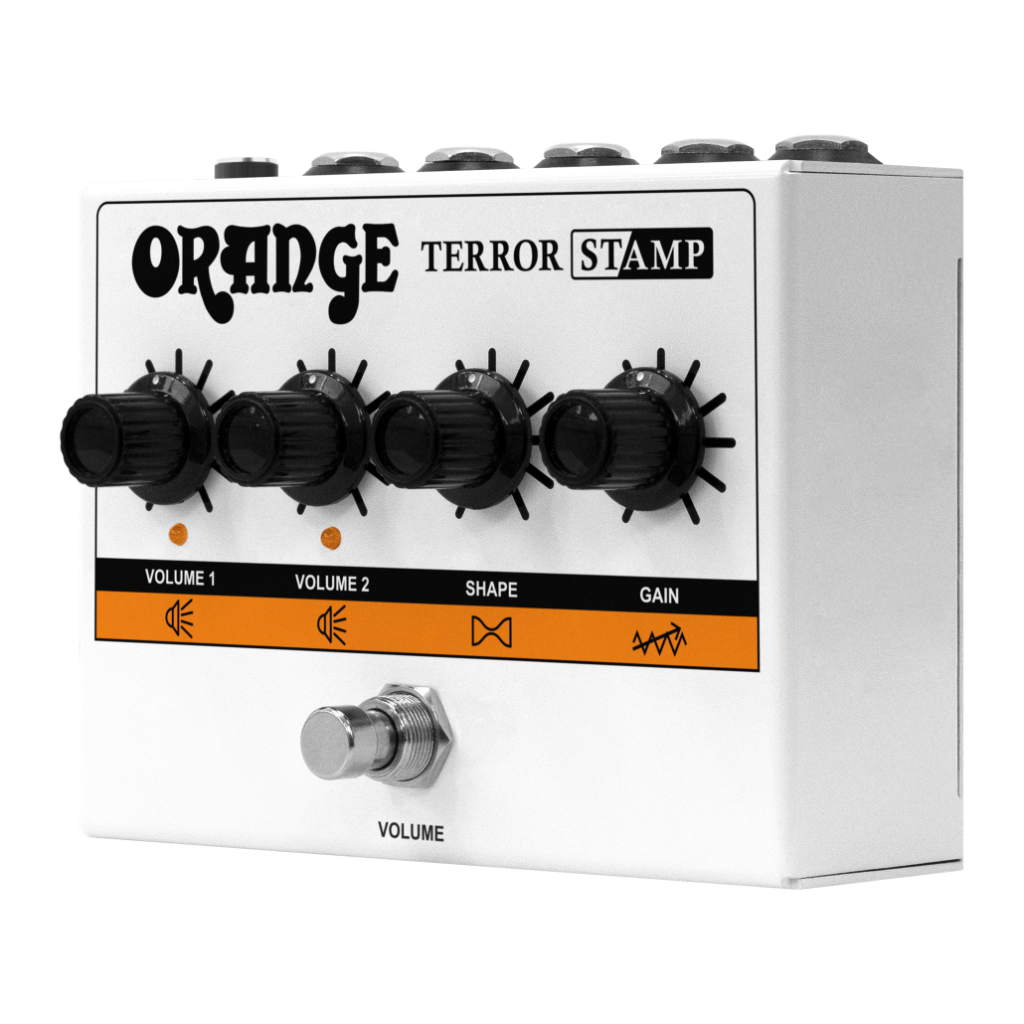 Classic Orange tones in an even smaller, lighter package

Huge tonal variety from the shape and gain controls

Cab-sim out sounds a little dated and uninspiring

For many years now, the Orange Terror series of amps have picked up a well-earned reputation for producing a massive sound, despite their smaller stature. With the Terror Stamp, Orange has taken the concept a step further by packing 20 Watts of valve/solid-state hybrid power into a smaller, pedal-sized format! Tom Quayle tells us more.

For 2020 these two powerhouses relinquish their crowns as the smallest amps in Orange’s range with the release of the new Terror Stamp hybrid amplifier – a tiny, 20w pedal amplifier featuring the same core technology and tones are the aforementioned Micro amps, but weighing in at a mind-blowing 0.38kg.

The concept is much the same as with the Micro Terror, featuring an ECC83 preamp tube and a 20w solid-state power amp for classic Orange tones. Still, the design has been taken further thanks to the addition of a fully-buffered FX Loop, Cab-Sim output and a second volume control for a solo boost.

Thanks to the analogue circuit design, the Terror Stamp feels every bit as great to play as you’d expect from an Orange amplifier and the gain control can take you from crystal cleans all the way up to raging riff territory if you need it, with lots of dynamics and ‘tubey’ compression along for the ride. There is a shed load of gain on board and nothing to stop you shoving a drive pedal in the front end if you need more or require a tighter low-end response. High gain tones are in the grungier side of the gain spectrum rather than the super-tight chug arena, but the powerful Shape control allows you to scoop the Mids and boost the Highs and Lows for a more metal tone if required.

With the controls dimed, the 20w power amp kicks out some serious volume through a 4x12 cab (using the 8/16-ohm speaker out) that would compete well with even the loudest drummer. Things get a little more problematic with clean tones, were setting the gain control low results in a lot of volume loss. The clean tones sound and feel great but, getting loud; punchy clean tones is difficult at anything but bedroom/practice volumes. All the fun is in the high gain tones anyway, and even the seriously crunchy tones clean up very nicely when the guitar’s volume control is reduced, mitigating the volume issue somewhat.

The FX loop is a fantastic upgrade from the Micro amps – you can now run the gain high and still use your time and modulation-based effects without compromise. You can even use the FX return as an 20w power amp for your modellers, preamps or pedals if you want, offering a highly flexible setup for live and studio use.

The weakest link in the chain is the Cab-Sim/Headphone output. Whilst it’s a welcome and useful addition, it just doesn’t sound that great and you’d probably be better off using the FX Send as a line out and running some speaker/cab IR’s or a dedicated Speaker Modelling pedal for more ‘Pro’ tones to the front of house or for recording. It just sounds a bit fizzy and uninspiring, but it works, and you can’t complain about having it as an option, especially if you need it in a pinch. It’s worth noting that the Speaker Out still works while headphones are plugged in, so you can run a speaker cab on stage and send a Cab-Sim signal to front of house or headphones etc. if you wish.

The Orange Terror Stamp is a fantastic product overall, featuring superb build quality, awesome Orange tones and great value. To be able to create a small pedal board featuring a real 20w hybrid tube amplifier with an FX loop and flexible recording/live options is amazing, especially these days where amps are disappearing more and more from stages. Like the Micro Terror amps, this Terror Stamp offers far more tonal variety and fun than its size would suggest and is well worth checking out.