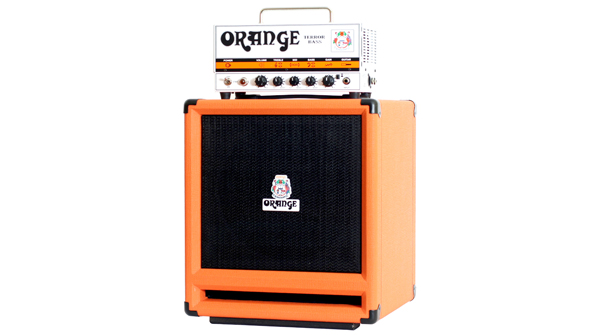 First-up is the diminutive Orange Terror Bass 500, which builds on the reputation of the already established and much-loved 'Terror' guitar range. The Orange Terror 500 head features a full valve pre-amplifier mated to a Class D power amplifier and boasts an output of 500W RMS into either four or eight Ohms at the flick of a switch, making it an incredibly 'configuration happy' solution for those of us who use different impedance cabinets that we mix and match, depending on playing situations.

The actual head itself is pretty straightforward. A real 'plug and play' design that really requires very little in the way of a 'getting started' manual, but don't be fooled by its simplicity: it's a little beast! Whilst reviewing, I spent some time with the Orange Terror plugged into other cabinets to see what it was capable of. It is LOUD!

Let's look at the controls. There is, it must be said, a bit of confusion here. According to Internet resources, the Terror Bass features active EQ, but Orange's website suggests that the preamp in the Terror Bass is a copy of the AD200B. The EQ section in that, also according to Orange, is passive. Well, no matter, I'm just being pedantic - use your ears and if it sounds good, then it is good. However, finally struggling to my point, most bass players like to know what the 'flat' setting is on an amp, so as to have somewhere to start from, before adding or subtracting EQ. Using my powers of deduction, (or Google as it is otherwise known) all controls to noon on the Terror is the answer to achieving a flat EQ.

Moving from the EQ, which is tuned nicely for bass, I'm next heading straight for that gain control! Being a valve pre-amp, I just had to crank up the gain to show you what it sounded like when the valves were cooking on gas! As you would expect, to add a bit of valve 'dirt' you turn up the gain control but pull the master volume down to the level you require in order to get the preamp section to drive in to distortion - and it works just fine, as you can hear on the video.

We did discover a minor idiosyncrasy that could cause problems problems for your PA or recording engineer, though. The point of the signal path that the DI is picked off isafterthe gain and EQ controls andbeforethe effects loop and master volume control. And yes, I checked the manual to be sure. In normal 'clean' operation, the level out of the DI seems to be fine. OK, so time to crank up the gain to get in a bit of dirt from the Orange Terror's valves - now watch your engineer burst into tears as he sees his level meters melt down! There is no way of taming the signal out of the DI in the same way that you can on the head, by pulling the master volume down. Youwillget a huge signal out of theDIunless you have means to pad it back somewhat. It's not a major issue, but I did feel it was worth pointing it out.

The input jack socket on the front has an active/passive switch next to it. This is to pad back the input if you are using an active bass with a high output that could overload the input section (well, put it this way, if you want to distort the input section, then having the pad disengaged will actually help! - engaged will keep the signal much cleaner.)

Things are kept nice and simple elsewhere too - the effects loop is pre-master volume but if you DI, you'll hear nothing of those effects in the loop going to the Front Of House - best to plug all of your effects in to the front of the amplifier instead. Curious really - you'd have to use another DI box at the end of your loop of effects if you wanted to make use of the loop in a live or recording situation. On the plus side, the DI has a 'ground lift' switch that can help in alleviating earth loops and noise, also situated on the side of the amplifier. As I mentioned in the video review, I like having those connections on the side of the head. You can get to them easily and no doubt the house stage engineer will like the ease of access too.

On the rear, the Speakon speaker outputs, of which there are two wired in parallel (allowing a minimum impedance across all cabinets of 4 Ohms) and the IEC mains power input socket. There is no voltage switch for using the head in different countries.

And so to how it sounds! The Orange Terror head has a big full sound that is great for vintage Rock tones! That said, this isn't super deep sub-tone territory. It does kick like a mule in those low E string regions but if you are after serious sub-bass frequencies, a bit of bass boost on an active instrument will help.

So is this head a winner? A resounding yes! My comments may seem a bit fussy, but they take nothing away from a tiny amp that has a big rock sound straight out of the bag (oh, did I mention the tailored bag included for the head and connection leads?) and which weighs a ridiculous 5kg. The Terror is dead simple to set-up and will reward you with a great Rock tone from the moment you plug-in.

Incidentally, for those who are into 'tube rolling' I am aware of many folk experimenting with different manufacturer's 12AX7/ECC83 valves (and their variants) to change the voicing and gain structure of the pre-amplifier. As with any tinkering, I would suggest checking with your warranty, but there have been varying degrees of success from those wanting to tame the grind a bit for a cleaner sound. Tube rolling is actually great fun, maybe something for a future discussion. It is worth point out, though, that the Orange Terror needs no re-biassing when you switch valves. Nice!

And a final leaving blow? Oh yes, if 500W isn't enough for you, there's a 1000W version out there too, equally small and lightweight!

So Orange joins in the 'lightweight revolution' for new bass amps with a 5Kg valve head that shows no signs of running out of steam and can give the similarly powered competition a good run for its money. Does it then do what so many others do and leave users to choose from conventionally sized speaker cabs? No it does not!

Let's look specifically at the review model, the SP212 that features two 12" speakers. You can see from the front grill, that one of the speakers is mounted directly behind the front inside the cabinet and features its own chamber. The other is directly behind it. By mounting speakers using this method, which is known as an 'isobaric' arrangement, you lower the bass frequency response of the cabinet. Although two speakers are present, and the cabinet sounds deeper than a similarly sized box with just one 12" speaker in, sadly it won't be any louder in terms of SPL. However having two speakers means you can throw twice as much power at it, in safety!

There's no need to delve too deeply into the physics here. If you are interested in the theory, there's plenty more about isobaric cabinets on the web.

In short, these new Orange bass cabinets offer high power handling from a low footprint - and there's another bonus, too. As well as the unusual speaker configuration, Orange has chosen to use high quality Eminence speakers with Neodymium magnets, which greatly reduces the weight. To prove the point, in total you're looking at a mere 20Kg, which is pretty great considering the cabinets are also made from sturdy 18mm birch ply!

It's clear Orange has gone for the true big Rock sound with this set-up and together with the Terror amp, the combination delivers it well - with plenty of bottom end. There's a middle presence from the speakers too, that will make them ideal for punching through a mix of guitars and drums. For me, I was missing a tweeter, which the SP212 doesn't have. Personally, I like having a quality treble unit in there too, so I get a pristine top end to that lovely 'new string' sound. That might not be your thing, but if it is, you might be missing those extra few kilohertz of response for a bit of 'Hi-Fi' sounding slap or indeed tapping up the 'dusty end' of the fretboard.

On the flip side, this cabinet will love distortion. I'm in no doubt that it will sound smooth and creamy when pushed hard by a great sounding distortion pedal into an amp and that is where I think this cabinet will shine. Think smooth top end with low end punch. Rated at 600W RMS and an impedance of 8 Ohms, it will be more than happy with the Orange Terror pushing it hard (something we enjoyed doing in the studio).

In total, this is a well constructed cab with a distinctive Rock sound. In fact it left me with a taste for more! What I want to try now is a pair of Orange's 4x10 cabinets with a Terror 1000.