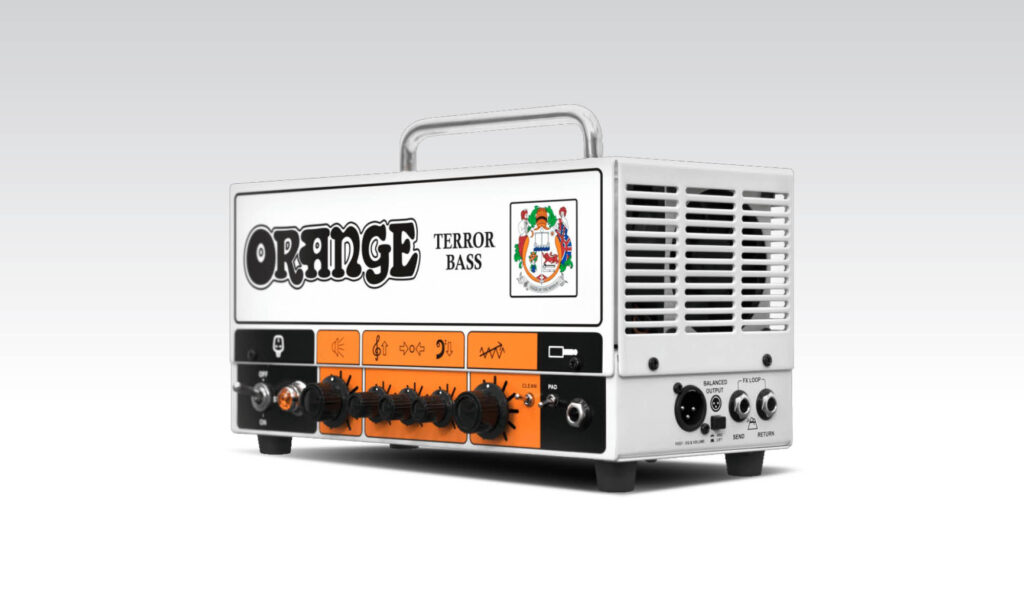 Whether or not this type of distortion is your bag or if you want to drive the amplifier clean, that’s for you to decide, but, Ade Emsley, technical director who designed the original and the version 2 OTB heads has included a new feature!

Great rock and mid present tones from the combination.

Bagged and ready to go.

Due to popular demand, the Orange Terror Bass is back, and sounding better than ever! Dan Veall reviews the  500-Watt Class D hybrid bass amp head and OCB112 Cabinet from the British amp giants.

Nearly ten years ago, when a fresh new batch of D Class amp’ technology was dropped on us, some companies went straight for the smallest footprint to get the maximum inches shed from our bass gear waistline. Sure, I am into that! However, at least one manufacturer, namely the very one we are looking at today drew from their roots in toneful valve amplification instead to meld “old technologies” with the newer, more efficient, topology of D Class amplification.

Well, we reviewed the original Terror Bass 500 back in issue 7 along with a beast of a cabinet, the ‘Smartpower 212’. Some years later, following customer feedback and I am sure countless thousands of hours and miles on the road for these and their stablemates and Orange are back. September 2018 wallets started twitching at the hint that OTB500 was back…

Redesigned internally yet the same cool exterior, Orange Terror Bass 500 2 gets some tweaking to its feature set and today it sits upon a lightweight Neodymium speaker loaded cabinet too.

The head itself is pretty straight forward. A real ‘plug and play’ design inside this all-metal shell, but don’t be fooled by its simplicity! The OTB500 2 features a completely redesigned valve driven preamplifier that has been lifted from the all-valve AD200b, which in itself in review sounded amazing in our studio. (issue 30) Our bass tone is manipulated here by an active EQ section featuring controls for Bass, Mid and Treble frequencies.

A bit of a tweak here and there and I went straight for the gain control, slowly nudging the dial-up whilst bringing the master volume down to control the overall volume. As expected from a valve preamplifier I got that tube drive thing happening easily. There’s lots of level increase available to start clipping the preamplifier even from a vintage instrument.  Whether or not this type of distortion is your bag or if you want to drive the amplifier clean, that’s for you to decide, but, Ade Emsley, technical director who designed the original and the version 2 OTB heads has included a new feature! Not only do we have an input level ‘pad’ that attenuates the initial bass amplitude by 6dB, a new ‘clean’ switch on the front panel offers up more headroom and as described, a cleaner sound further up the dial. A great addition if you want to push the overall volume higher before you get to that driven biting point.
Round to the side of our lunchbox, Orange again treat us to a D.I output and also an effects loop. I appreciate this amplifier isn’t at all heavy and just spinning it around to see what’s around the back takes no effort; it’s still nice that these features are super easy to get to.

Speaking of the back, OTB features speaker connection via Speakon connectors and power is industry standard in the form of the ubiquitous “IEC” 3 pin socket. Orange also include an impedance switch. For those used to all valve amplifiers this will appear normal, but on a hybrid with a solid-state power section, this might seem odd. Well, it’s to configure the power amplifier’s onboard limiter for the load that is being connected to make the best use of the power the amplifier can deliver.

Straight out of the box, OTB comes neatly and very safely packaged inside its own padded gig bag that looks the part and well made, meaning you can safely transport your amp’ without fear of too many bumps on the way to and from the rehearsal space or gig.

OTB 500 sits atop an Orange OCB112 cabinet today, a rear ported design compact cabinet. It, much like the TC Electronic K cabs and the Laney SL line features Lavoce made Neodymium speakers.  No tweeter in this one, so expect a smooth roll off of the highs from this 400W 12” woofer. The rear port helps to support the low-end frequencies.

OCB112 is built from 15” birch ply wrapped in the company signature colour livery with a basket weave vinyl grill. Black fixtures and handles contrast beautifully and the whole thing is a neat and tidy package. Just one small handle on this one, fixed to the top of the cabinet. OTB500’s feet mean that the handle isn’t getting in the way or sitting comfortably.

With the two items combined, the OCB112 is a definite contributor to the overall sound. This does mean that I felt the combination was better suited to mid-range punch rather than super scooped hifi bass tones. On this occasion, I didn’t have my usual Bergantino cabinets with me as I would have liked to have compared them. That said, I felt that the 3 band equaliser although flexible couldn’t offer the wider reaches of a 4 band system and certainly not that of a parametric, but its jewel is that it doesn’t pretend to do that: The sound out of this diminutive sibling is glorious with midrange character. It doesn’t need you to mess with 20 knobs, it wants you to plug in and get on with it. OTB will take care of the “being heard” bit. 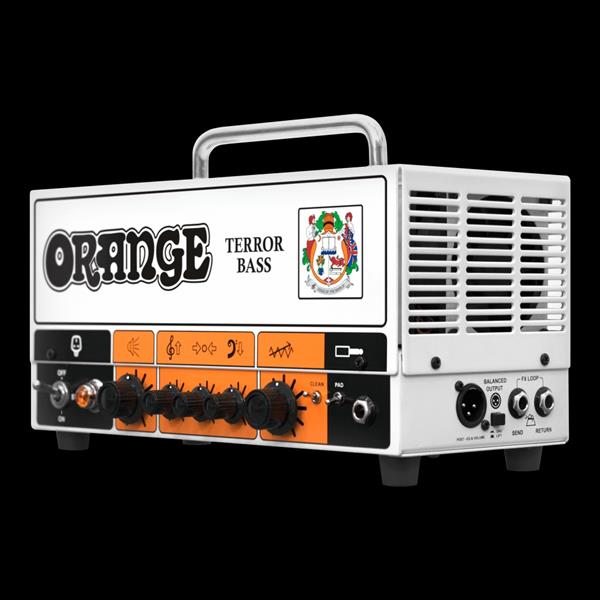 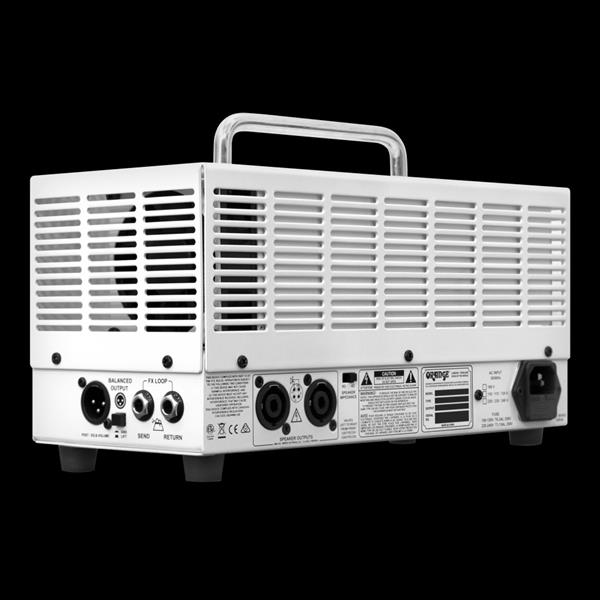 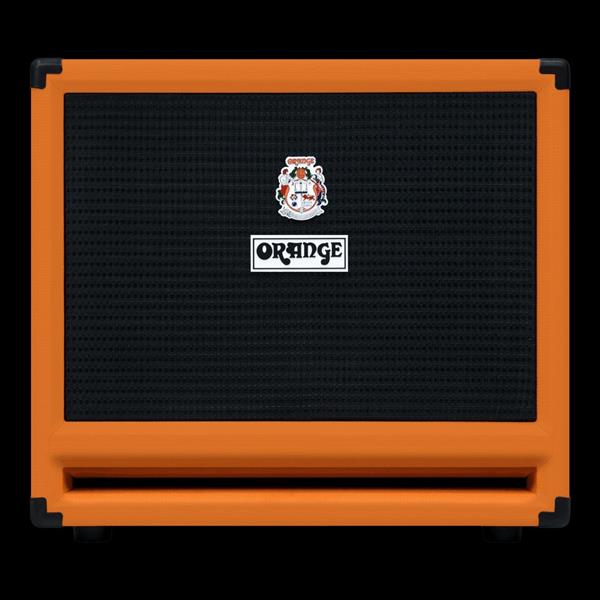 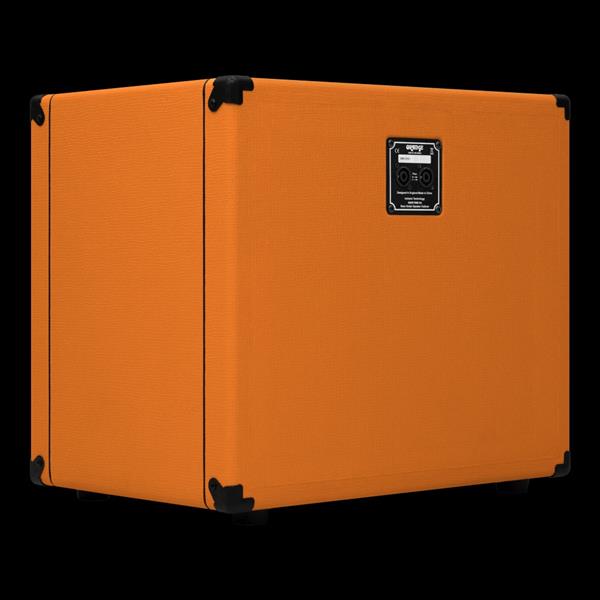