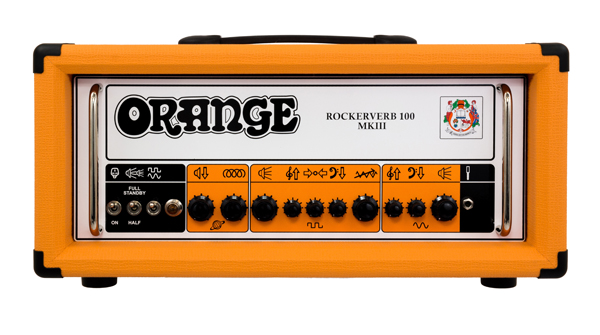 Not too many amps make it to a third generation, but Orange's Rockerverb seems to go on and on with demand for its high gain performance undimmed. Tom Quayle gives his verdict on the latest version.

The Orange Rockerverb is now in its third iteration for 2015, as Orange attempts to improve upon an already excellent design which has become a favourite among the high gain community, being the first high gain head it produced, around ten years ago. The Mk III model follows the changes initiated in the Mk II by keeping the four EL34 power tubes as opposed to the 6v6’s from the original design. A quartet of Ecc83 tubes drive the preamp section with a pair of Ecc81s providing a tube driven spring reverb and buffered FX loop for a total of ten tubes' worth of tone!

The MKIII has been updated from the previous iteration in a number of ways however, with a re-voiced clean channel with more clean headroom and an improved reverb circuit. One of the biggest updates is the inclusion of an on-board attenuator, placed after the master volume for quiet operation whilst retaining that all important power tube saturation, along with a half power mode allowing for 100, 70, 50 or 30 Watt modes.

The first thing that hits you about the Rockerverb is just how solid and well made this thing is. This is traditional British guitar amp building at its best. The Mk III is a large amp, even for a 100 Watt head, and weighs as much as a small child but it feels like it would survive a bomb blast and looks spectacular in its bright orange chassis (also available in black). Orange has decided to go for its famous ‘Pics Only’ graphics on the Mk III Rockerverb, which is a first for the series. For those not in the know, ‘Pics Only’ refers to front panel of the amp only using hieroglyphic symbols instead of text for each of the controls, an idea taken from the highly regarded vintage OR range of amps that Orange released back in the early '70s. The look is fantastic and the symbols are very easy to understand with intuitive runes that more than adequately describe each function.

The front panel of the amp is well laid out with power and standby switches at the far left offering full and half power modes and very solid operation extending throughout other controls that feel equally as reliable as the chassis. Next up are the attenuation and reverb controls, followed by the drive channel with a three band EQ, gain and volume controls and finally the clean channel with two band treble and bass, gain and volume whilst the mid control from the Mk II has been removed for easier EQing on this channel. The back panel contains the FX loop send and return, outputs for and 8 Ohm, 16 Ohm or two 16 Ohm speaker cabs, foot-switch inputs and a switch to select between all four or just two of the output tubes for full or half power operation. Both the attenuator and reverb are foot-switchable, offering the interesting potential of using the attenuator as a volume boost for solos during a gig!

Plugged into an Orange PPC412 cab, the Rockerverb Mk III is a roaring, and impressive high gain beast of an amp as you’d expect that is every bit as good as the Mk I and II, but it has way more than that up its sleeve. Starting with the clean channel, it’s easy to forget that you’re plugged into a ‘Rock/Metal’ amp as the tone is full of tubey chime and spank that wouldn’t be out of place in a boutique clean amp. Unlike many high gain amps that just tag on a clean channel as a courtesy, the Rockerverb’s clean channel has a highly responsive, thumping bottom end and sparkly, defined highs, teamed with a great deal of clean headroom, especially in full power mode. This makes the amp a very solid platform for placing drive pedals in the front of and a very versatile performer, suitable for many styles other than high gain Rock and Metal. Backing the volume down and cranking the gain takes you into pleasingly spongy and easy to play crunch territory, especially when running at 50 or 30 Watt mode and attenuating down allows you to really crank the power section for a surprising amount of drive from this clean channel.

The lack of a mid-control may concern some but we certainly had no issue dialling in some gorgeous clean tones with just the bass and treble controls that are on offer. Moving over to the drive channel reveals a huge number of tones from light and dynamic Blues to high gain shred tones with a tight bottom end thanks to the 100 Watt output section. The amount of gain on offer should please even the most gain-hungry players but can be supplemented further with a boost pedal in the front end. The reverb is very musical without ever becoming over-bearing or harsh and blends superbly with the clean channel and lower gain drive sounds.

The Rockerverb was already a great high gain amp when it was released ten years ago. With the Mk III, Orange has improved the design further and made the clean channel so good that it could happily exist as an amp on its own. For a 100 Watt head this well made, the Rockerverb can also be purchased for a very reasonable price and should last for many years to come. It’s an impressive package in every way and well worth checking out for anyone looking for a versatile, professional head that covers all the tonal bases.

Of course, not everyone wants a full blown 100 Watt head these days, so the good news is that Orange also offers a 50 Watt version, as well as a 50 Watt 2x12 combo model. It's good to see Orange taking this well respected - not to say cherished - design and actually managing to improve it without taking anything away at all. Great stuff!